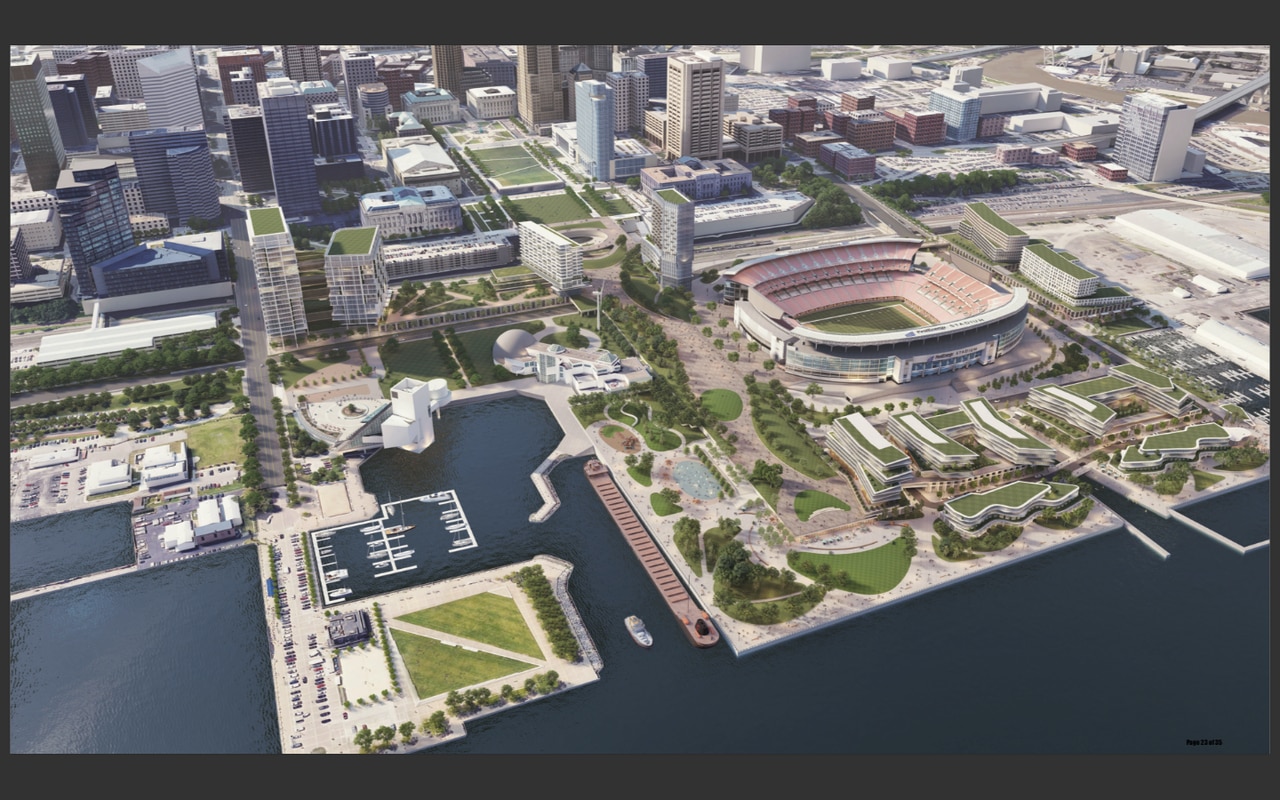 CLEVELAND, Ohio — A bold new concept for improving Cleveland’s downtown lakefront, proposed in May by Browns co-owners Jimmy and Dee Haslam, shows how the city could better capitalize on its proximity to Lake Erie. It also shows how far the city has fallen behind its peers in the industrial Midwest in waterfront redevelopment.

What can Cleveland learn from other cities in the region? The Plain Dealer and cleveland.com visited projects in Cincinnati and St. Louis to find out. In a nutshell, here are 12 lessons from the two cities:

1. Political leadership: New projects on the Ohio River in Cincinnati and the Mississippi in St. Louis had serious buy-in from elected officials at all levels, in both parties. Cleveland Mayor Frank Jackson has embraced the Haslam proposal for the downtown lakefront, but he’s on his way out after 16 years in office. Looking ahead, the project won’t go anywhere without support from federal, state, county, and local officials. That includes the new mayor Cleveland will choose in November and the winner of the race for Cuyahoga County executive in 2022.

2. Don’t identify the cost too soon: Cleveland said this spring in an application for a planning grant from the Ohio Department of Transportation that the Haslam concept for the downtown lakefront would cost $229 million. Granted, the city didn’t want to leave a box empty on the application form, but that number may come back to haunt it if the eventual cost exceeds that amount. Landscape architect Gullivar Shepard of Boston-based Michael Van Valkenburgh Associates, who helped design the $380 million renovation of Gateway Arch National Park on the St. Louis riverfront, said it’s never a good idea to name a number too soon in a planning process. “You’ll be judged by that number to the end,’’ he said.

3. Will the public have a say? St. Louis and Cincinnati asked voters to approve new property and sales taxes, respectively, to help fund their big projects. Presumably, the public will have a chance to weigh in on the new vision for the Cleveland lakefront as a new, multimillion-dollar feasibility study funded by the city and ODOT gets underway. But it’s still unclear when and how the public will be involved.

4. Will Uncle Sam help? Federal money played a critical role in the big waterfront projects in St. Louis and Cincinnati. Will Uncle Sam help Cleveland with a big lakefront revamp? Could the $1 trillion infrastructure bill proposed by the Biden Administration provide any funding? Such help could be critical, given that Greater Cleveland has other needs including an airport upgrade, a new Cuyahoga County Jail, and a $435 million deal to keep the Indians happy at Progressive Field.

5. Equity: Leaders of the waterfront projects in St. Louis and Cincinnati broke down massive construction projects into bite-size bid packages in order to enable small, local, minority- and female-owned businesses to compete for work. But both projects have also raised questions over whether they helped alleviate poverty or diverted resources away from underserved neighborhoods. Cleveland’s lakefront project will be better if it’s a win-win for everyone, not just a benefit for the well-to-do.

6. Project management: Big capital projects transcend election cycles and require greater capacity than a shrinking city like Cleveland can muster. The city’s record for project management under Jackson has been mixed. (Note the ugly concrete Jersey barriers that still mar Public Square five years — five! — after completion of a $50 million renovation in 2016). If Cleveland hopes to redo its downtown lakefront under a new mayor, it needs to help create a new regional project management structure, such as a lakefront or waterfront development authority. Any such agency needs to operate with greater transparency than Jackson’s tightlipped administration has provided.

7. Don’t let voices that say ‘no’ kill a good design: To redo their waterfronts, Cincinnati and St. Louis had to surmount difficulties in city planning and civil engineering that could have easily diluted or killed both projects. Both cities surmounted technical challenges by empowering engineers and planners to find solutions. The best example to emulate may be the Technical Advisory Group formed by project partners in St. Louis to achieve agreement among specialists in city, state, and federal agencies on the renovation of Gateway Arch National Park.

8. Think bigger: Civic and political leaders in St. Louis didn’t draw an outline around the area under consideration in a design competition for their big waterfront project. Cincinnatians were undaunted about taking on 195 acres of riverfront frequently beset by floods. In Cleveland, the Haslam proposal only looks at a relatively small piece of the lakefront. The city needs to take a broader view that includes a fresh assessment of whether to develop Burke Lakefront Airport and how the city’s East Side could be better connected to neighborhoods south of the Shoreway. Any such plans need to take into account ODOT’s long-term goal of smoothing out the tight Interstate 90 turn at Dead Man’s Curve.

9. Think smaller: As it stands today, Cleveland’s downtown Mall is vast, sterile, and rarely used for community events. Doubling its size by extending it over the Shoreway to Lake Erie won’t make sense unless it includes moments of intimacy, color, and texture, not to mention shade. The new waterfront landscapes in St. Louis and Cincinnati are full of sweeping vistas, but they also include human-scaled features that bring the grandeur down to size. That’s a critically important lesson for Cleveland to follow.

10. The role of regional parks: Cincinnati Parks and the nonprofit Great Rivers Greenway in St. Louis have played huge roles in riverfront revitalization in their respective cities. Cleveland Metroparks could play an equally important role on the downtown lakefront. The entire lakefront east of the Cuyahoga River, including downtown, needs to be better connected to long-underserved minority neighborhoods on Cleveland’s East Side that have been walled off by Interstate 90 and the Innerbelt Freeway. Metroparks can help, big time.

11. Design matters: St. Louis figured out how to maintain high design standards of urban design, civil engineering, and landscape architecture in its big renovation of Gateway Arch National Park. Cincinnati started out with strong engineering and urban design for public infrastructure but then allowed private sector developers to follow up with mediocre office buildings and apartments. Cleveland needs to avoid following that example.

12. People matter: More than political leadership is required for big waterfront projects. Public, private sector, and nonprofit leaders in Cincinnati and St. Louis played key roles in the projects in their respective cities. In St. Louis, influential lawyer Walter Metcalfe worked without pay to make the renovation of Gateway Arch National Park “the first thing I did in the morning and the last thing I did at night, every day,’’ as he put it. To succeed on the lakefront, Cleveland may need its own Metcalfe.

* Can the North Coast catch up? Cincinnati is 25 years ahead of Cleveland in waterfront redevelopment

(The Center Square) – A year after Democrat auditor Nicole Galloway’s audit revealed an employee stole $316,887 from the city of Center in northeast Missouri, a follow-up report found only slight … END_OF_DOCUMENT_TOKEN_TO_BE_REPLACED

JEFFERSON CITY, Mo. – The average number of COVID-19 cases is at a seven-week low. The 7-day rolling average for cases in Missouri sits at 1,387; yesterday, it was 1,435. Exactly one month ago, the … END_OF_DOCUMENT_TOKEN_TO_BE_REPLACED

Chad Niezing of Manchester captured the title Sunday in the Missouri Mid-Amateur Championship at Jefferson City Country Club. Niezing opened with a 67 on Saturday before carding a 70 on Sunday to win … END_OF_DOCUMENT_TOKEN_TO_BE_REPLACED

Terri Blevins, 44, registers for help at an event sponsored by the city of St. Louis with the Metropolitan St. Louis Equal Housing and Opportunity Council to assist people with filing their … END_OF_DOCUMENT_TOKEN_TO_BE_REPLACED