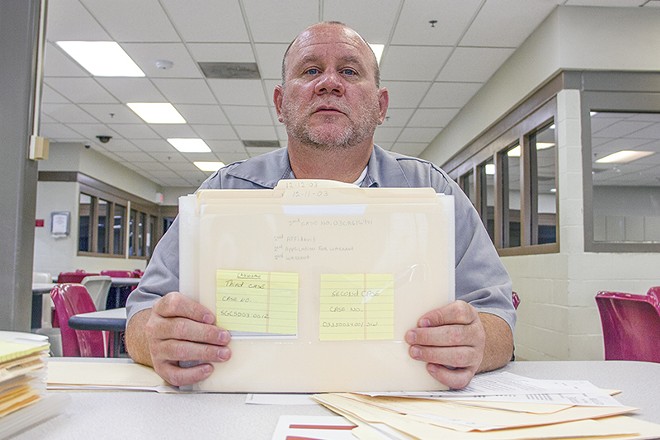 Trapped in prison sentences equivalent to those convicted of violent crimes, Missouri’s “prior and persistent” drug offenders have experienced a recent run of high hopes and devastating disappointments.

On May 14, the very last day of the Missouri legislative session, what amounted to a clerical error deleted an amendment from a key public safety bill, killing a measure that would have restored parole to potentially dozens of drug offenders.

But even before that blunder, legislative and legal attempts to address the plight of drug offenders sentenced under the harsh “three strike” sentencing law have failed — though not before igniting hope for relief, if only briefly.

In 2017, the Missouri legislature repealed the “prior and persistent” drug offender statute, which for years had effectively multiplied punishments for prior drug offenders, adding decades to sentences and even barring them from the system of supervised release known as parole. But the repeal was fatally flawed, and, in 2020, the Missouri Supreme Court ruled that it could not be applied retroactively.

“They can’t even give that sentence anymore,” notes Timothy Prosser in an interview from the Southeast Correctional Center, where he’s spent much of the past eighteen years on a life sentence for a meth-related trafficking charge.

Even among the extreme sentences produced by the state’s old drug laws, the 60-year-old inmate is an outlier.

“I’m the last one,” Prosser says. “The only one to have this life sentence for a non-violent drug case.”

In 2016, the RFT profiled Prosser and his startling sentence. As confirmed by the Missouri Department of Corrections, he is indeed the only known offender serving a life sentence for drug crimes in a Missouri prison.

Prosser was convicted in 2003 for first-degree trafficking, which, briefly, made him a potential beneficiary of Senate Bill 26, which included an amendment restoring parole to some drug offenders who had lost their eligibility with the “prior and persistent” designation.

As the RFT first reported last week that the bill passed with overwhelming bipartisan support on May 14, but the amendment affecting drug offenders did not.

Prosser’s trafficking charge and time-served would have made him eligible for parole under the terms of the amendment, which was written to affect only those charged with first- and second-degree trafficking. While not the same thing as a guaranteed release, the change would have allowed the offenders to finally have their cases heard by the specialized board which approves parole for thousands every year.

The amendment was on track — until it wasn’t. Despite the measure crossing the final hurdles into the final bill, somewhere along the line, for reasons still not clear, a Senate “drafter” removed the amendment before the vote. (The amendment sponsor, Republican Rep. Cheri Toalson Reisch, says she believes the drafter may have mistakenly interpreted the amendment’s statutory language as an error and deleted it in an overzealous act of caution.)

Although it was intended for the final version of the bill, the amendment had been cut without the knowledge of the House leadership or its sponsor, who found out about the error only days after the vote.

“I’m disappointed that it didn’t go through,” Prosser says of the amendment’s erasure.

The legislative debacle puts Prosser back at square one. Like others designated as “prior and persistent” offenders, he has spent years submitting clemency petitions to multiple governors. He’s filed legal motions, all unsuccessful, arguing that the 2017 repeal should apply to old cases as well as the new ones.

“Pretty much the only hope I have is that he’s looking at my case,” Prosser says. “I have a clemency petition I’m hoping he looks at.”

While Parson’s clemency selection process is secretive, the governor has taken a notable interest in the plight of “prior and persistent” drug offenders. Since 2020, Parson has commuted the sentences of nine of them, with his most recent clemency announcement restoring parole to Robert Franklin, who has served fourteen years of a 22-year prison sentence for a marijuana-related trafficking charge.

For drug offenders convicted today, there is no need to rely on the governor’s mercy. In 2020, Missouri’s parole board released more than 5,000 people from prison on supervised release. Under the state’s updated, post-2017 criminal code, even prior drug offenders are eligible for parole after serving a longer percentage of their full sentence.

But with a life sentence and no parole, there is no percentage Prosser can hit for early release. His sentence will last as long as he does.

“Not much has changed here, day after day,” he says. “I just try to work on my case.”

Of course, things changed significantly as the pandemic hit Missouri prisons, threatening not just prisoners’ health, but triggering new policies barring visitation and further limiting their connections to the outside world.

Prosser, 60, lost more than just visitations. In June, his father succumbed to COVID-19. It was a fast-moving illness, Prosser says. He never got the opportunity to say goodbye.

Prosser may have a uniquely long sentence, but without the amendment previously intended for Senate Bill 26, he’s in the same position as the roughly 230 other offenders saddled with the “prior and persistent” label. Like him, they are still serving no-parole sentences under a law that legislators agree should no longer exist but can’t seem to fix.

For Prosser, all that’s left to do is wait — and hope that Parson or next year’s legislative session brings better news.

“One thing you learn here, unfortunately, is patience,” he says.

JEFFERSON CITY — A coalition of seven conservative, pro-life members of the Missouri Senate has sent a letter asking the governor to call the General Assembly into session to pass legislation ensuring … END_OF_DOCUMENT_TOKEN_TO_BE_REPLACED

The Environmental Protection Agency’s announcement last week that it plans to craft new protections for streams and wetlands could have far-reaching implications, both nationally and for Missouri’s … END_OF_DOCUMENT_TOKEN_TO_BE_REPLACED

Jefferson City Jefferson City firefighters were still working Tuesday to put out hot spots after a train car caught fire the night before. The call came in a little before 8 p.m. Monday for a smoking … END_OF_DOCUMENT_TOKEN_TO_BE_REPLACED