A larger than normal crowd attend an August 2019 Farmington City Council meeting held at Long Memorial Hall to express their displeasure of the city’s plan to franchise municipal trash services to a single provider. 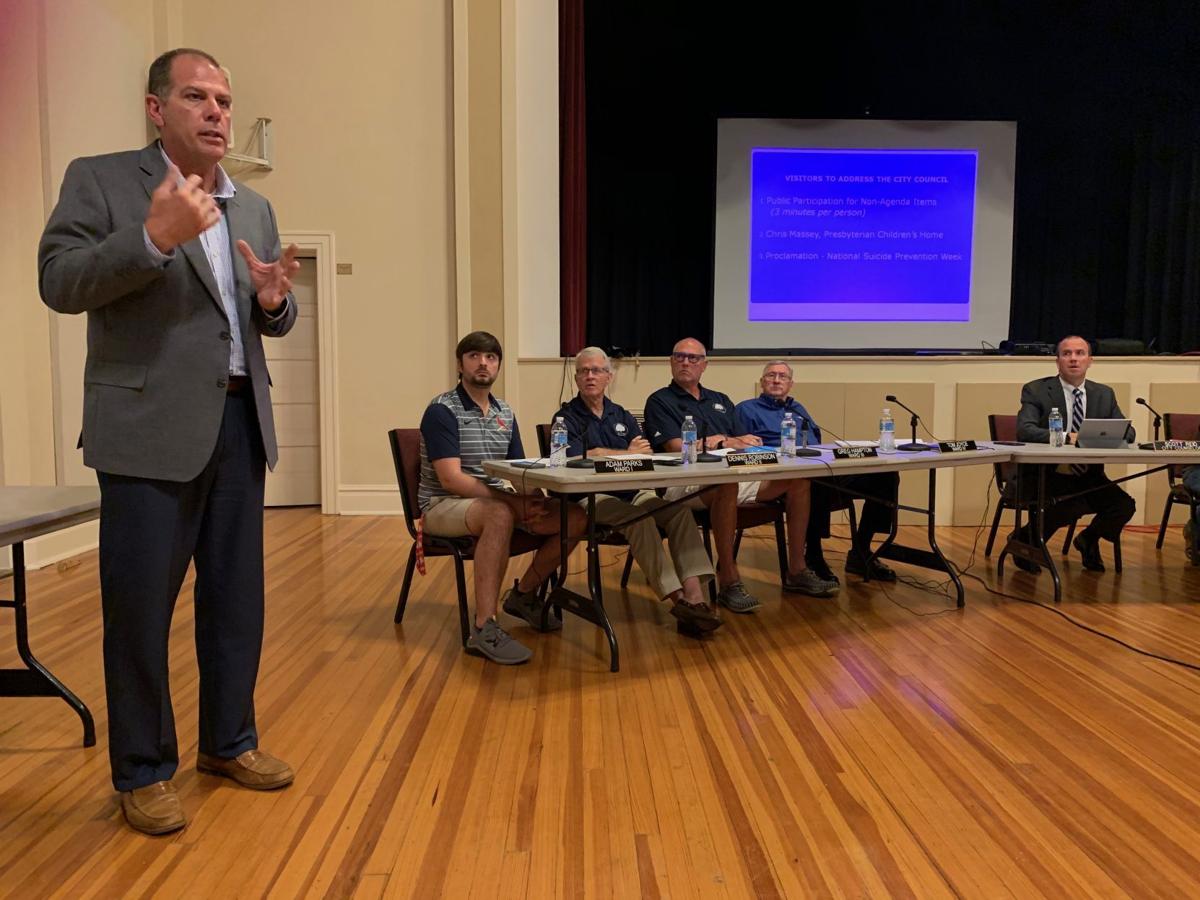 City Administrator Greg Beavers speaks about a change in city trash service at an August 2019 city council meeting attended by angry trash service owners and employees, along with a number of angry Farmington residents.

With the recent passage of legislation in Jefferson City, internet sales taxes can be made available to local governments that have lost out to out-of-state sellers, such as Amazon and Wayfair. The “Wayfair” bill, SB 153, was recently signed into law by Gov. Mike Parson. To be able to recover those taxes, Farmington will have to pass a “use tax” to receive reimbursed from the state.

“Commerce is changing, the way that commerce is being transacted is changing, and we have to change tax collection policy,” Beavers said. “They’re being changed in different ways. Farmington has had a 2% rate for many years, one of the lowest in the region.

“Many cities, because they’ve lost sales tax revenue because of the shift in commerce — people buying more stuff online — have had to increase their local sales taxes just to provide essential services: police, fire, parks, all those things are paid for by sales taxes. Farmington has had sufficient growth that we’ve avoided doing that.

“The need to pass a use tax goes back to a lawsuit that was filed back in the early ‘90s,” he said. “If the city hadn’t specifically passed that tax on out-of-state sales, post-Hancock Amendment, they were invalid. There was kind of a scramble for cities around the state to put a use tax on the ballot, so that if you bought something out of state and brought it into the state, you have to pay taxes on it. Farmington put a use tax on the ballot back in the mid-’90s and it failed.”

(The Center Square) – A year after Democrat auditor Nicole Galloway’s audit revealed an employee stole $316,887 from the city of Center in northeast Missouri, a follow-up report found only slight … END_OF_DOCUMENT_TOKEN_TO_BE_REPLACED

JEFFERSON CITY, Mo. – The average number of COVID-19 cases is at a seven-week low. The 7-day rolling average for cases in Missouri sits at 1,387; yesterday, it was 1,435. Exactly one month ago, the … END_OF_DOCUMENT_TOKEN_TO_BE_REPLACED

Chad Niezing of Manchester captured the title Sunday in the Missouri Mid-Amateur Championship at Jefferson City Country Club. Niezing opened with a 67 on Saturday before carding a 70 on Sunday to win … END_OF_DOCUMENT_TOKEN_TO_BE_REPLACED

Terri Blevins, 44, registers for help at an event sponsored by the city of St. Louis with the Metropolitan St. Louis Equal Housing and Opportunity Council to assist people with filing their … END_OF_DOCUMENT_TOKEN_TO_BE_REPLACED