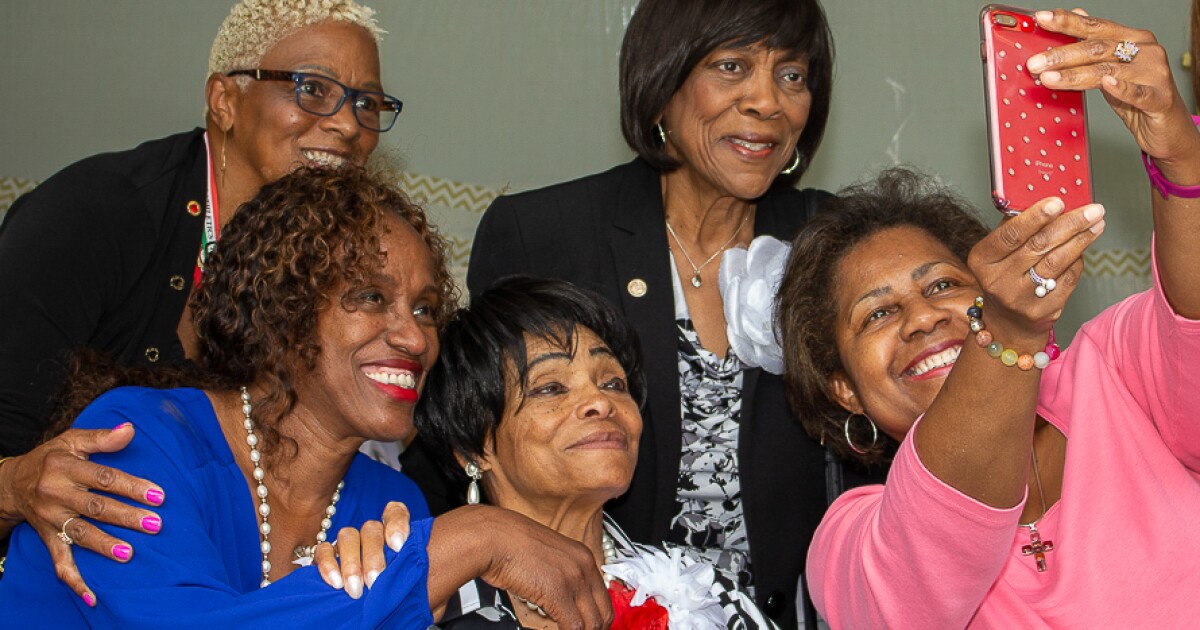 The neighborhood children would affectionately call them “Mama Erby” and “Mama Thompson.”

The neighborhood’s “mothers” would be the first ones to hear about any problems the children were having in the schools, according to their own children.

“A lot of my friends would say, ‘I’m going to tell Ms. Erby about this’ or ‘I’m talking to Ms. Thompson,’” said Kristina Erby-Carr, Hazel Erby’s youngest daughter. “And no issue was too small for them to advocate for the kids.”

Their shared passion for caring for children was one of the main reasons they entered politics, eventually becoming the matriarchs of Black politics in North St. Louis. While the two had very different leadership styles — Erby often worked quietly in the background and Thompson often a keynote speaker at events and marches — they both were fiercely committed to being accessible to the community and to paving a way for future leaders.

“The unique thing about Betty was when she put out the rallying cry, it made you do some soul searching,” said Adolphus Pruitt, president of the St. Louis City NAACP. “That was the prescription that was needed at the time. And then Hazel, talk about a quiet giant. Her whispers had just as much influence as other people’s shouts.”

Earlier this month, the two community leaders and longtime friends passed away within nine days of each other: Hazel Erby on July 2 and Betty Thompson on July 11.

Their legacy is building up the Democratic base in North St. Louis, initiating youth and job development programs, advocating for voting rights and relentlessly fighting for racial equity.

“There will never be another like Betty Thompson or Hazel Erby,” said State Rep. Kimberly-Ann Collins. “Both of them have inspired so many people, and it’s up to us to fulfill that legacy and keep passing it down for generations to come.”

Jennings Councilman Terry Wilson said their legacy will live on through the many young leaders they “rooted for” and mentored, including himself.

“Everything that they’ve instilled in us, we have to elevate it and take it even further,” Wilson said. “No backwards steps, that’s something that Betty Thompson and Hazel Erby always emphasized.”

But behind their impact on politics and the community was an unbreakable friendship. Angela Erby says Thompson was essentially part of the family, joking that she might as well have been the keynote speaker at the Erby family reunions.

“Even if they disagreed about issues or disagreed about who they were going to support, that mutual respect, friendship and love was still there,” Angela Erby said. “It didn’t matter.”

‘From the project house to the statehouse’

Betty Thompson was born in a small Mississippi town in 1939, as one of 13 children. When she was just a baby, her family moved to St. Louis and she grew up in the Carr Square Village and Pruitt-Igoe public housing developments.

Some of her first lessons in planning and organizing came from going to meetings with her father for the White Caps, a citizens patrol to help keep Pruitt-Igoe safe.

After graduating from Sumner High School in 1958, she attended Harris-Stowe State University and Washington University in St. Louis, earning certificates in business and management.

She once heard Dr. Martin Luther King, Jr. speak at a local church and she was moved to join the protests to demand jobs for Black people at places like Jefferson Bank. She marched for fair housing beyond public housing and led rent strikes.

“Dr. King spoke the truth and things needed to change for the African-American community,” Thompson once told her granddaughter in an interview.

In 1964, she began working at the Human Development Corporation, a government-funded program that would distribute cheese and other government commodities, as well as help residents pay their housing bills and find jobs.

Her oldest son, Tony Thompson, remembers sitting under the table or playing in the corner with his younger brother, Tyrone, while his mother was leading community meetings at Pruitt-Igoe.

“I’ve just always known her to be on the go, but I don’t remember us being with babysitters,” Tony said. “I remember being with her.”

“Though it’s a big loss for the greater community, it’s particularly a loss for my neighbors,” said Chapelle-Nadal, who later became a state senator. “Those are the folks who I can feel their pain in a different way. These are two individuals who mentored the next generation.”

State Rep. Kimberly-Ann Collins remembers when Thompson called her after she announced her campaign.

“She asked, ‘Do you know what you’re doing?’” Collins said, laughing. “I told her that I don’t have a clue of what I’m doing. And she said, ‘You better take notes.’ If you were a young woman running for office, she was with you.”

When Collins won the race, Thompson made sure she had a place to stay and was comfortable in Jefferson City.

Betty Thompson also devoted much of her later life trying to reduce gun violence, after her son, Tyrone Thompson, and grandson, Tyrell Thompson, were shot and killed. She and her children established the Tyrone Thompson Institute for Nonviolence, which provides career assistance to public school students. 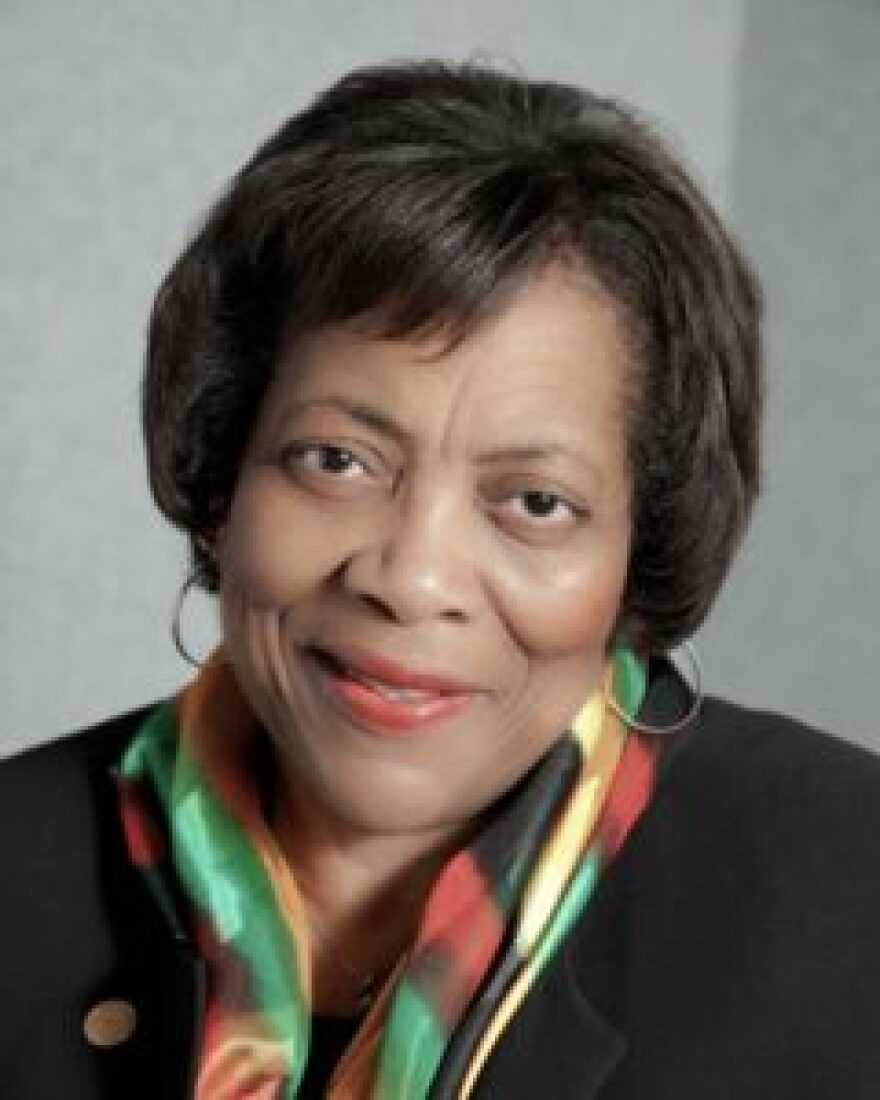 Erby followed Thompson’s lead in becoming the president of the Parent Teacher Organization of several schools in University City. Later, Thompson’s move to get involved in voting and elections was inspiring to Erby and the whole family, her daughters said.

“Mom was inspired,” Angela said. “And if there was something that we needed to campaign for, we were all involved. We would get out door-to-door for bids for Ms. Thompson.”

Hazel Erby was always a connector and a resource for the community, but still her family and friends were surprised when she decided to enter politics.

“I talked to a girl yesterday who used to be our neighbor,” Angela Erby said. “She said the only thing she could compare it to was Mom was like the mother on Leave it to Beaver. Half the neighborhood was like, ‘She’s in politics?’”

But by the end of her political career, she was seen as the fierce leader of Black-elected officials in St. Louis County and a champion of St. Louis County’s minority participation program for contractors — which she fought hard to ensure compliance. She also led the appropriation of funds for a recreation center in North St. Louis County.

Erby first became the Democratic committeewoman of the University Township and later a member of the St. Louis County Council for 15 years.

She eventually became the first Black woman to chair the council.

“For me, she was very fundamental, not only with helping me develop my own political views, but with knowing how to actually affect change within my community,” Govan said. 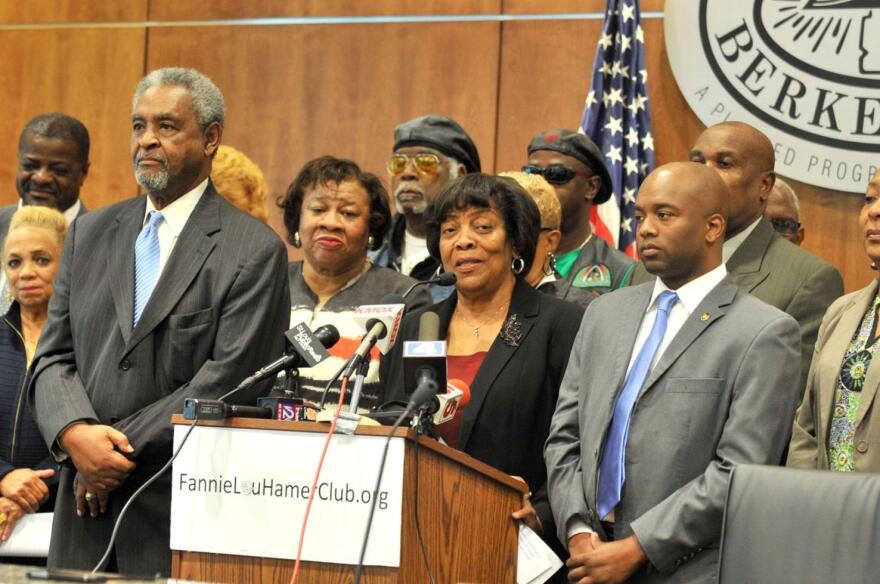 Many credit Thompson with turning St. Louis County executive seat Democratic in the 1980s and laying foundational work for energizing North St. Louis voters, with much support from Erby.

But when Michael Brown was killed in 2014, they both stepped into their leadership roles more assertively.

“Black women, who have long pulled the wagon for the Democratic Party, are now taking their well-earned place as the leaders and drivers of the party,” wrote Mike Jones in a column for the St. Louis American.

As a longtime civil rights activist, it was a natural role for Thompson, who spoke at protests and marches.

But it was a bit different for Erby, who was used to being a “doer” behind the scenes. Still, she didn’t back down when in September 2014 she was asked to lead the Fannie Lou Hamer Democratic Coalition of St. Louis County, a political organization of more than 30 elected officials aimed at addressing the “disparate treatment” and “disrespect” of African Americans in the county.

Erby, who represented most of Ferguson as councilwoman, was seen as the “center of gravity” of the coalition. After the county council failed to pass inclusion bills and government officials ignored their voices during the Ferguson protests and Normandy schools crisis, Erby told her colleagues that she was “sick and tired of being sick and tired,” quoting Fannie Lou Hamer, the iconic and historic leader of the Mississippi Freedom Democratic Party. Among those ignoring the Black leaders were then-Gov. Jay Nixon and then-St. Louis County Executive Steve Stenger, she said.

“We are sick and tired of being disrespected as both tax-paying citizens and elected officials by those we look to for leadership in higher office,” Erby said at a 2014 press conference.

Kristina Erby said her family noticed a shift in Erby as well.

“What I saw from her in these later years of her life was a determination to get some things done that she knew needed to be done,” she said.

And at the same time, she was preparing the next generation of leaders to step into the fight, Angela Erby said.

“She inspired them, she mentored them,” Angela said. “And she was really working hard to give them all the tools that they would need to continue on.”

Walker noted that the reason Black women put health on the back burner is because of the “strong Black woman” phenotype that many find themselves in ST. LOUIS — Black … END_OF_DOCUMENT_TOKEN_TO_BE_REPLACED

Here's your guide to what's happening on Wednesday at the Olympics, and what St. Louis connections will be in action ST. LOUIS — The Tokyo Olympics are finally here and 5 … END_OF_DOCUMENT_TOKEN_TO_BE_REPLACED