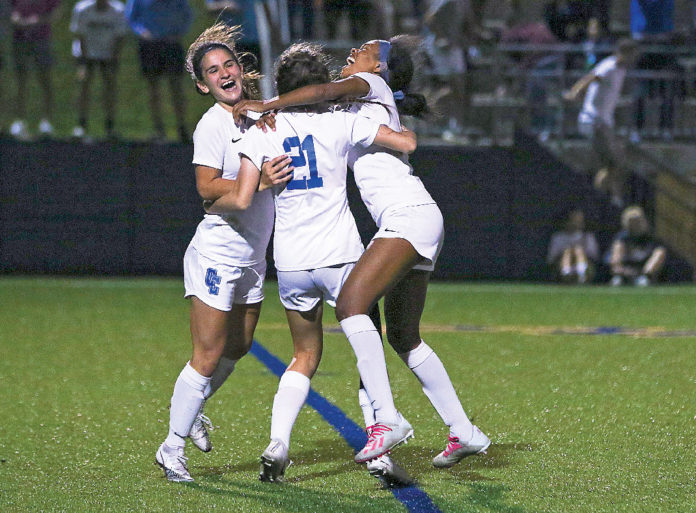 The Capital City Lady Cavaliers didn’t have a set order on who was going to shoot when on penalty kicks.
Except who was going to shoot first.
Natalie Allison, Capital City’s goalkeeper, converted on the first shot in the round to lead the Lady Cavaliers to a 3-2 victory against the Helias Lady Crusaders in the semifinals of the Class 4 District 9 Tournament at the Crusader Athletic Complex.
“We talked about it, I had some in mind,” Capital City coach Travis Cairer said. “But they decided. They were hesitant on who was going to shoot first, then they told (Allison) she was going to go first. And she said ‘OK.’”
With the win, third-seeded Capital City (16-6) advances to Thursday night’s district title game against top-seeded Rock Bridge (9-13). The Bruins defeated Jefferson City 1-0 in Tuesday night’s first semifinal.
“I wish it was us that won, but I’m happy for Capital City,” Helias coach Jay Hebenheimer said.
The win capped a furious comeback for the Lady Cavaliers, who trailed 2-0 with just 15 minutes remaining in the first half on a pair of goals by Helias’ Izzy Luebbert.
“(Luebbert’s) very dangerous, I may have leaned on her too much tonight and she ran herself tired,” Hebenheimer said.
Cairer was happy to see the Lady Cavaliers keep battling down two goals.
“We have a bad habit of getting down on each other and taking ourselves out of the game when things get tough and we’re stressed,” he said. “But that didn’t happen tonight, this is probably as proud as I’ve been of this team this season for digging down and working together.
“It wasn’t the prettiest game, but we showed some grit.”
Brooklynn Greene got Capital City on the board with a little less than 10 minutes left in the first half. Greene took a pass near midfield from Gia Pardalos and drove to the net for what was an important goal.
“We had some opportunities that we couldn’t convert on and time kept ticking and kept ticking,” Cairer said. “It was nice to get it 2-1.
“We’ve told them over and over 2-0 is the worst lead to have because then if it gets to 2-1, the team that just scored has all the momentum.”
The Lady Crusaders were comfortable with the one-goal lead at the half.
“We felt it was still our game,” Hebenheimer said.
Capital City tied it with 3:41 left in regulation when Ayanna Clarke scored off an assist by Pardalos.
“What a finish for (Clarke),” Hebenheimer said. “She did a good job of tucking it away, for her to find a finish was huge.”
The two 15-minute overtime periods were scoreless, setting up the round of PKs.
After Allison started with a score, Helias tied it on a goal by Camryn Strope. Greene then converted for the Lady Cavaliers before Allison made a stop on Helias’ next attempt.
But it was waved off because Allison was ruled to have moved early off her line. But the second attempt bounced off the crossbar and away from the net and Capital City led 2-1 after two rounds in the best-of-five.
Hebenheimer didn’t think Allison committed a violation on the first attempt.
“Going off the crossbar, that was the game controlling the game,” he said. “I don’t think Nat was actually off her line on the first one.”
Clarke made it 3-1 before Savanah Feltrop of Helias scored to cut the deficit to one.
Pardalos and Luebbert both scored in the fourth round before Kourtney Blatz of the Lady Cavaliers ended it with a goal to start round five.
“Helias fought hard the entire game, it’s unfortunate somebody had to lose,” Cairer said. “I’m just happy it wasn’t us.”
Cairer said the Lady Cavaliers had only shot three PKs all season and hadn’t worked on them much in practice.
“Not a lot,” Cairer said. “Not recently.”
Helias, the No. 2 district seed, ends its season at 9-13.
“We’re young, the future is bright,” Hebenheimer said. “We can use this to fuel next season.”

A Jefferson City woman died Saturday after she was thrown out of a boat as it was traveling along the Missouri River.Tanna R. Henson, 48, was pronounced dead at 11:10 p.m. at University Hospital in … END_OF_DOCUMENT_TOKEN_TO_BE_REPLACED

JEFFERSON CITY, Mo. (AP) – Missouri is at risk of losing $4.5 billion in tax revenue and federal funding for Medicaid because of a fight between lawmakers over contraceptives.At issue is a state tax … END_OF_DOCUMENT_TOKEN_TO_BE_REPLACED