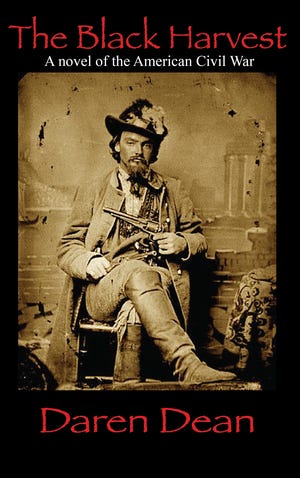 Even the most observant readers only tend to notice cycles of boom and bust.

Their favorite author either is set to release new words in the atmosphere or resides somewhere in hiatus. The true rhythms — and timing — of this work happen somewhere beyond a surface-level reading.

Take Daren Dean. A longtime Columbia resident, and now a professor of English at Lincoln University in Jefferson City, Dean sits on the precipice of a boom. He will release two novels before the end of 2021. His first offering, a Civil War-era novel “The Black Harvest” (Livingston Press, The University of West Alabama), squints into daylight July 30.

But the earliest notions of “The Black Harvest” date back to the 1990s, and the story endured a series of fits and starts. Both upcoming books survived a season in which Dean swore off the very act of writing novels.

“The Black Harvest” travels alongside Ashby Marchbanks, a young Missourian caught between competing visions of glory. The life laid out before him cuts a path to the cross, and answering God’s call to save souls with a fevered “Here I am; send me.”

But the gravity of a more violent world pulls on Ashby, drawing him into the ranks of bushwhackers.

“The Great Commission was strong on my conscience, but then so was the War,” Ashby recalls early in the book.

A thousand little choices deliver him into the orbit of mythic men such as William Quantrill, “Bloody Bill” Anderson and the James brothers. Ministers of a much different sort, they preside over matters of life and death with itchy trigger fingers and blood-stained dogma.

“The Black Harvest” doesn’t flow from a single spring, but represents a bundling of Dean’s interests and experiences. The writer subscribes to Ray Bradbury’s philosophy about how one’s life informs their work.

“The things that you are interested in as a child might end up being the subject matter of your books in your 30s and 40s and beyond,” Dean said, describing Bradbury’s creed.

For Dean, those influences include Ken Burns’ Civil War documentary, Charles Frazier’s dimensional historical novel “Cold Mountain” and the everyday aftermath of Clint Eastwood Westerns. People who watched flicks like “The Outlaw Josey Wales” looked for enough rope to tether themselves to legends of the Old West.

“Everyone you knew, every other person you talked to, they were related to Jesse James — for better or for worse,” Dean recalled.

That tendency caught Dean’s ear, teaching him a significant lesson about the stories we tell ourselves.

The language of American Christianity contours Dean’s storytelling, a tongue he learned from a charismatic pastor in his own family. Like the Biblical Jacob, Ashby wrestles God — or some shadow of the divine — throughout the book. Carnal impulses and heavenly whispers compete for his attention; this conflict between flesh and spirit animates “The Black Harvest.”

“I awoke in a copse of woods down the side of a ravine with the bodies of two men I did not recognize, hoping not to be struck by the serpent tongues of purple and yellow lightning illuminating the parched earth,” Ashby says in a memorable passage.

The pale image of God in him sets the tone for Ashby’s relationship with his murderous cohort. His fellow bushwhackers needle him for his religion; they also offer a grudging respect, partly out of curiosity — and partly from the desire for some holy insurance.

“This crew was always hunting for a man’s weakness but not all of them were convinced that I wasn’t talking with the Lord either,” Dean writes.

This inner turmoil and the outside context which compounds it freed Dean to write a different sort of Civil War tale.

Ashby’s soul strife opened the door for Dean to stay true to his own surroundings, to write a place and people he knew.

“I need someone that’s as conflicted as the country was — and, by the country, I mean Missouri,” he said.

Dean believes “The Black Harvest” represents his best work to date. It won’t be long, however, before readers experience another facet of his storytelling. His second novel of the year, “This Vale of Tears,” arrives via Cowboy Jamboree Press in October.

Think a more messed-up version of “Romeo and Juliet” set in small-town Missouri. The novel follows multiple points of view as it introduces Troy Scofield and Raelyn Phelps, an older man and younger woman from fierce families who use each other in an effort to escape all manner of heartache.

The work grounds Dean in a genre he knows well: “grit-lit,” an unflinching yet often darkly comic style of writing that draws from influences such as Faulkner and O’Connor.

“Dean introduces us to an ensemble of unforgettable characters who hunger for love and vengeance and whose lives are haunted by the places their hearts and guts land them in,” author Randolph Thomas wrote in a blurb for the book.

Local readers will have multiple chances to access Dean’s words and worlds — he has author talks set at libraries in Columbia, Fulton and Jefferson City. Keep up with his work and whereabouts at https://darendean.wixsite.com/daren-dean.

Aarik Danielsen is the features and culture editor for the Tribune. Contact him at adanielsen@columbiatribune.com or by calling 573-815-1731.

(The Center Square) – A year after Democrat auditor Nicole Galloway’s audit revealed an employee stole $316,887 from the city of Center in northeast Missouri, a follow-up report found only slight … END_OF_DOCUMENT_TOKEN_TO_BE_REPLACED

JEFFERSON CITY, Mo. – The average number of COVID-19 cases is at a seven-week low. The 7-day rolling average for cases in Missouri sits at 1,387; yesterday, it was 1,435. Exactly one month ago, the … END_OF_DOCUMENT_TOKEN_TO_BE_REPLACED

Chad Niezing of Manchester captured the title Sunday in the Missouri Mid-Amateur Championship at Jefferson City Country Club. Niezing opened with a 67 on Saturday before carding a 70 on Sunday to win … END_OF_DOCUMENT_TOKEN_TO_BE_REPLACED

Terri Blevins, 44, registers for help at an event sponsored by the city of St. Louis with the Metropolitan St. Louis Equal Housing and Opportunity Council to assist people with filing their … END_OF_DOCUMENT_TOKEN_TO_BE_REPLACED