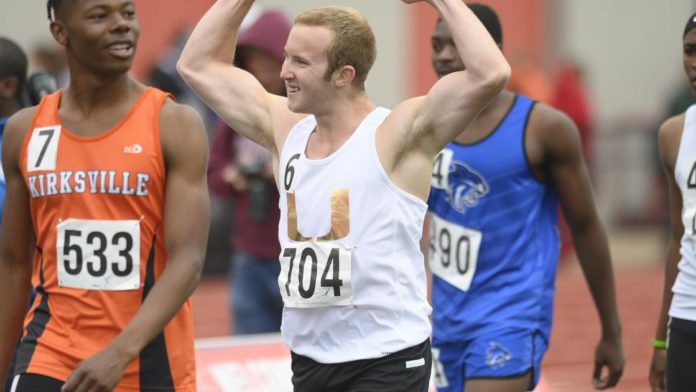 “It feels good, especially not having last season,” Logan said. “My coach and I just kept at it and went it all throughout the offseason and winter. Now we’re reaping those benefits.”All that work put in for nearly two years was worth it as he battled that wind in the final 200 meters on Friday. And capturing the title in his senior season just meant something extra.”It was the goal I wanted last year, so this was the main motivation this year,” Logan said.

FESTUS CAPTURES 3200 RELAY Jacob Meyer wanted the gold Friday because there was a little extra weight on his team’s shoulder.Even with that extra weight, it didn’t stop the Tigers from bringing home the state championship in the 3200-meter relay race.”This makes up for the guys who couldn’t do it last year,” Meyer said. The relay title helped earn the Tigers a fourth-place team finish. Webb City won the overall team title with 64 points. Kearney (57), Trinity (49) finished in the top three. Festus and Willard were in a two-way tie for fourth place with 47 team points.”We all worked together and had it in our minds that we could be the best we could in high school,” Cullen Krieg said.
>>> Don’t Miss Today’s BEST Amazon Deals!

A Jefferson City woman died Saturday after she was thrown out of a boat as it was traveling along the Missouri River.Tanna R. Henson, 48, was pronounced dead at 11:10 p.m. at University Hospital in … END_OF_DOCUMENT_TOKEN_TO_BE_REPLACED

JEFFERSON CITY, Mo. (AP) – Missouri is at risk of losing $4.5 billion in tax revenue and federal funding for Medicaid because of a fight between lawmakers over contraceptives.At issue is a state tax … END_OF_DOCUMENT_TOKEN_TO_BE_REPLACED