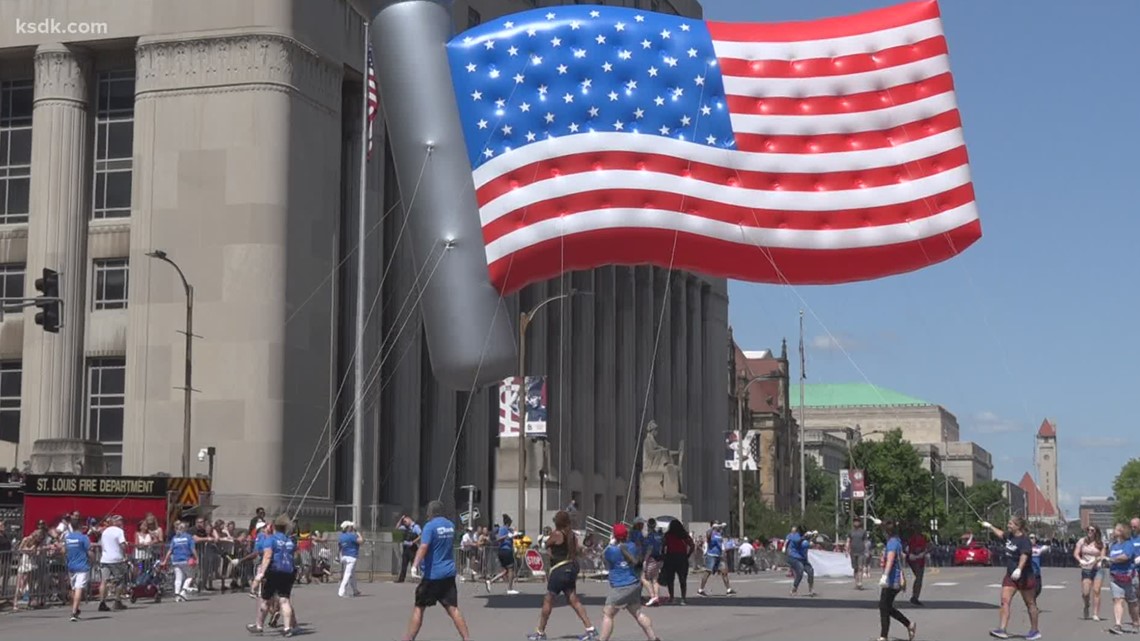 They are generally red, white and blue, and include food.

COLUMBIA, Illinois — While Americans are, historically, accustomed to massive celebrations on Independence Day, some of the best around St. Louis this year involve hundreds, not thousands, of people.

Welcome to Columbia, Illinois, where residents turned out on Independence Day morning for a kids’ bike parade that makes its way to Metter Park.

Mandy McGuire, a member of CROWN (Columbia’s Resourceful Organization of Women Networking), used a megaphone to communicate with the crowd.

“Can we have everybody’s attention for just one moment,” McGuire said.

The parade was not a race, but it was a contest.

“We have picked the winners for the bike parade decorating contest,” continued McGuire, “so if your bike is sitting up in front of us, please come forward so we can give you your prize.”

The winners were Adeline Ainsworth, Carter Webb and Luna Reibeling, who described her decorations.

“I wrapped scarves around my bike, and I put a basket and some flowers inside the basket,” said Reibeling. “I also made streamers to go on the end of my handle bars.”

At St. Charles Riverfest, a band called Rogers and Nienhaus warmed up the crowd before noon.

There, you could pretty much eat your way right down vendor row.

“I’m making fried Oreos,” she said. “It’s a funnel cake, but not a straight funnel cake. We have something else in there.”

Tina and Doug Jones are making a living finding new ways to prepare corn on the cob.

“So, this has our secret sauce,” said Jones, describing an ear of corn she is holding up, “parmesan and spice. This is what we’re known for, our signature dish.”

O’FALLON, Mo. (AP) — Missouri Gov. Mike Parson announced Tuesday that he made good on his promise to pardon a couple who gained notoriety for pointing guns at social justice demonstrators as they … END_OF_DOCUMENT_TOKEN_TO_BE_REPLACED

Writing in a 16-page decision, Karen Boeger, who oversees contracts and purchasing for the Office of Administration, said Corizon had no basis for that accusation. Support … END_OF_DOCUMENT_TOKEN_TO_BE_REPLACED

(Licking, MO) -- A Missouri prisoner who walked away from a June work release assignment at the state fairgrounds in Sedalia has been transferred to a maximum-security prison in Licking. The state … END_OF_DOCUMENT_TOKEN_TO_BE_REPLACED