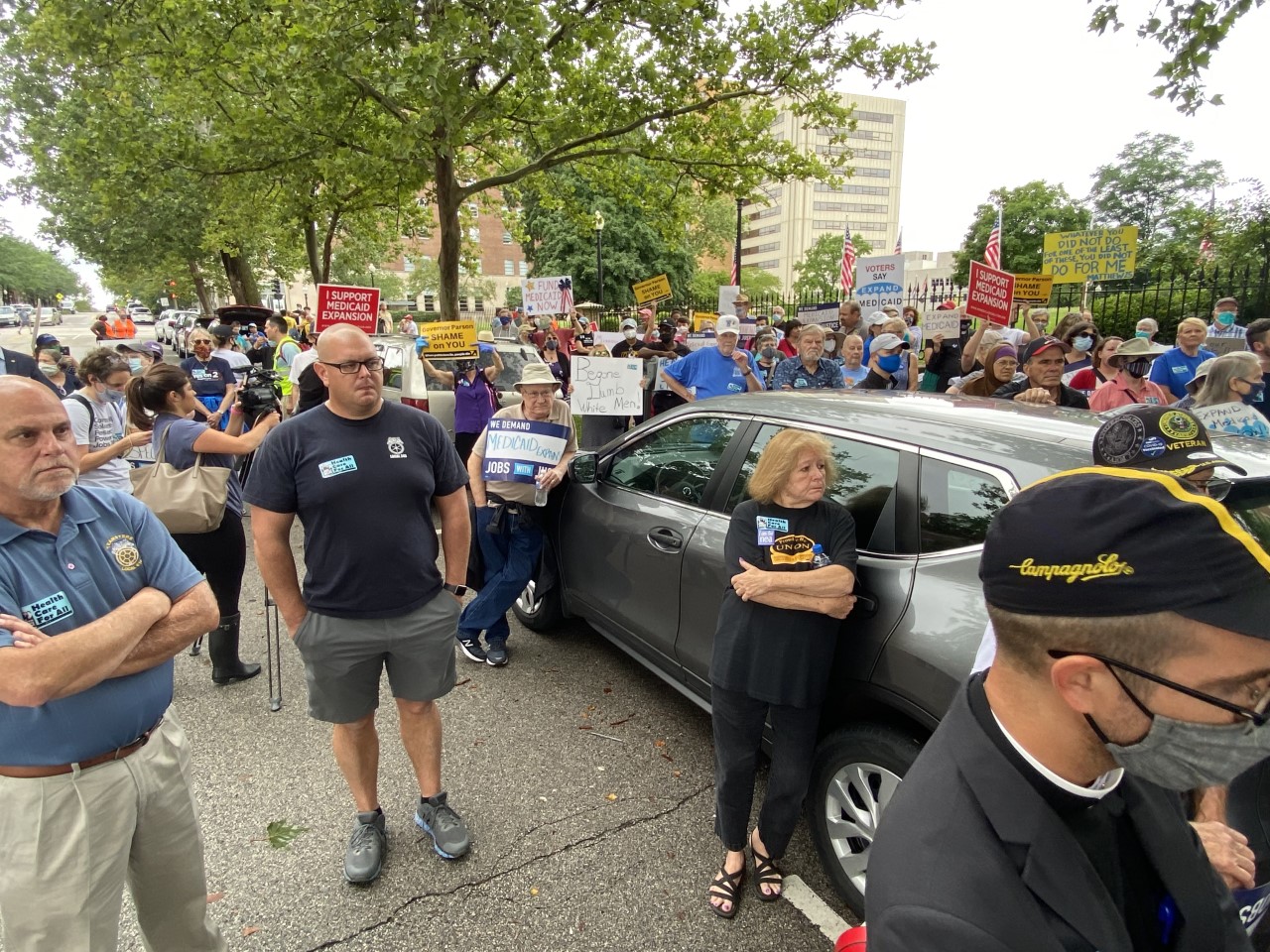 JEFFERSON CITY, Mo. – On the same day thousands of Missourians were supposed to become eligible for Medicaid under expansion, dozens protested outside of the Governor’s Mansion demanding he fund it.

Parson then said Missouri could not move wards with expanding Medicaid since there was no funding. More than 100 people called for the governor Thursday to fund it, but Parson said it’s too late.

“These demonstrators would have been more served during the legislative session when that happened,” Parson said after a press conference at Missouri Department of Transportation Thursday.

“The reality of it is, nothing is going to change until next session.”

Protestors could be heard outside of the mansion yelling, “Vote him out.”

John Bowman, president of NAACP in St. Louis County, was one of the many rallying in Jefferson City, wanting to see expansion happen.

“As you can see, we are out here in solidarity and we’re very serious about making sure all of our citizens get covered by healthcare,” Bowman said.

“We should not be treated like healthcare is a privilege and the voices have spoken out loud to this issue over and over again. Now, we just need Gov. Parson and the legislative body to do what the people have said they want to see done.”

The measure was approved by 53 percent of the voters and was supposed to expand eligibility for Medicaid July 1. The expansion was expected to cost $1.9 billion with less than $130 million coming from the state.

The amendment would have expanded Medicaid for Missourians between the ages of 19 to 64 making less than $17,800 a year.

“Even though you’re protesting about it, the money wasn’t in the budget and that was the legislative process,” Parson said.

Protestors then marched two blocks from the mansion to the Missouri Department of Transportation where Parson was set to attend an announcement Thursday. While marching, demonstrators were chanting, “What do we want? Medicaid. When do we want it? Now.”

St. Louis area resident Luke Barber joined the rally Thursday because he was supposed to be covered under expansion.

The 26-year-old has autism and needs specialized care that’s not covered under insurance with his employers.

“If expansion isn’t done, I’ll be forced to chose one of the two jobs to quit,” Barber said.

Barber works at Schnucks as a bagger and at Easterseals Midwest as a self-determination instructor. He said some of his specialized services are targeted case management, job coaching, and community support services.

“That allows me to learn how to work, how to function in the community, how to use transportation, how to cook without making a mess, just basic day to day living that people take for granted as well as medication for mental health and sociological support I need,” Barber said.

He said he wants the governor to know there are thousands of Missourians in the same boat.

“Why are you denying the care and support and services that I need to be able to work?” Barber said. “Working gives me self-esteem, it gives me motivation.”

When asked about lawmakers bringing up expansion again during the next legislative session, Parson said he was unsure.

“We’ll have to see what the legislators do,” Parson said. “The court ruling had an effect on that, and the judge made a ruling and then you go through the appeals process so we’re a long way from the finish line on that.”

Parson is referring to the court case involving three single moms who are suing the state for not expanding Medicaid. All three women would have been covered under expansion if the state would have allowed it to move forward.

A judge in Cole County ruled the amendment “unconstitutional.” The team of lawyers defending the women filed an appeal, which is set to be heard in front of the Missouri Supreme Court July 13.

(The Center Square) – A year after Democrat auditor Nicole Galloway’s audit revealed an employee stole $316,887 from the city of Center in northeast Missouri, a follow-up report found only slight … END_OF_DOCUMENT_TOKEN_TO_BE_REPLACED

JEFFERSON CITY, Mo. – The average number of COVID-19 cases is at a seven-week low. The 7-day rolling average for cases in Missouri sits at 1,387; yesterday, it was 1,435. Exactly one month ago, the … END_OF_DOCUMENT_TOKEN_TO_BE_REPLACED

Chad Niezing of Manchester captured the title Sunday in the Missouri Mid-Amateur Championship at Jefferson City Country Club. Niezing opened with a 67 on Saturday before carding a 70 on Sunday to win … END_OF_DOCUMENT_TOKEN_TO_BE_REPLACED

Terri Blevins, 44, registers for help at an event sponsored by the city of St. Louis with the Metropolitan St. Louis Equal Housing and Opportunity Council to assist people with filing their … END_OF_DOCUMENT_TOKEN_TO_BE_REPLACED