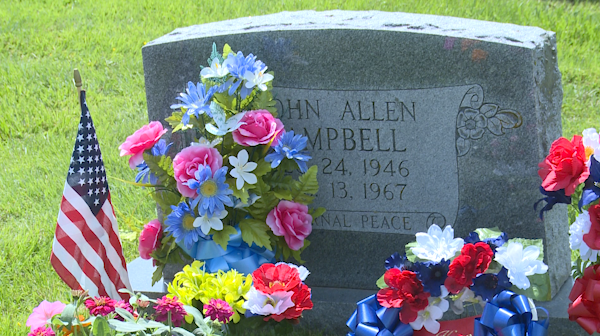 RUSSELLVILLE – Residents of Cole and Moniteau counties gathered at Enloe Cemetery Sunday afternoon in a memorial weekend celebration.Cemetery board members hosted a ceremony honoring Russellville Marine John Allen Campbell and WWI veteran Roscoe Enloe.Jeremy Amick, President of the Enloe Cemetery board, said one of the event’s goals was to honor John Campbell.Campbell is the only casualty of the Vietnam war from Russellville, Mo.“Every year the Enloe Cemetery board hosts a Memorial Day ceremony and of course, Memorial day is to honor those who have fallen,” Amick said. They also honored WWI casualty Roscoe Enloe who is only the second Cole County resident who lost his life in a war. The ceremony started with cemetery board member Jeff Payne leading the crowd in a moment of silence followed by both prayer and song. President Amick continued the ceremony by honoring a WWI casualty Roscoe Enloe. He died in France while serving in WWI, but a headstone was placed next to his family’s graves in the Enloe Cemetery. The American Legion Post 5 in Jefferson City is named after Roscoe Enloe. To show a token of appreciation for the American Legion Post 5, on behalf of the Enloe cemeteries board, Jeremy Amick presented a framed picture of Roscoe Enloe’s headstone in France to the post’s commander.Amick said “I truly value the relationship Enloe Cemetery has with the American Legion Post 5.”

Success! An email has been sent to with a link to confirm list signup.

Error! There was an error processing your request.

Family members of John Allen Campbell shared a poem they wrote about John’s life.Campbell’s nieces Jamie Doolittle and Ashley Shannon expressed their love for their uncle in a quick poem and speech about how Campbell left his family behind to go serve his country. “We will never forget John and the ultimate sacrifice he made and we will continue to honor him and share his legacy,” Ashley Shannon said. The last speaker of the event was Rosie Berfluef, a former secretary of the Jefferson City Veterans Council.She came to the event to inform others about her ongoing memorial project in Jefferson City.Berfluef along with many other members of her committee are in the process of establishing a Gold Star monument that will honor the families of fallen heroes.“A Gold Star family is a family that has lost a loved one in the war,” Berfluef. This memorial is expected to be finished on August 2nd and will be located just north of the Capitol building in Jefferson city. The ceremony ended with everyone joining together to sing America the Beautiful.

KANSAS CITY, MO (KCTV5) — The investigation into the police shooting of Malcolm Johnson has cleared another step. The case file for the Missouri Highway Patrol is now in Jefferson City, according … END_OF_DOCUMENT_TOKEN_TO_BE_REPLACED

Progress is slow on redeveloping the area around Capitol Avenue, but the revitalization of the Capital City’s historic corridor is starting to show the results of some much needed love.The East … END_OF_DOCUMENT_TOKEN_TO_BE_REPLACED

A new gaming venue in Jefferson City is hoping to create a safe, comfortable space for all local gamers to enjoy.Mimics JC held a soft opening last weekend at its new spot at 312 Lafayette St. as the … END_OF_DOCUMENT_TOKEN_TO_BE_REPLACED