Environmental activists in the Metro East and St. Louis have organized around similar issues for years.

They’ve pushed for cleaner air in the region’s majority-Black communities and stronger rules for how coal-fired power plants dispose of toxic byproducts. Despite sharing many individual goals, local environmental groups largely confined their advocacy to their home state, with the Mississippi River acting as an informal barrier.

But now that’s changing, said Leah Clyburn of Beyond Coal in Missouri. She started working with other organizations in St. Louis on pollution, climate change and environmental justice about 18 months ago.

“As we started going deeper into the conversation, we got really clear that there’s no boundaries when it comes to pollution,” Clyburn said. “That what happens here in Missouri lands on the backs, on the shoulders of people who live in Illinois.”

The strategy now is to link similar experiences of people living in polluted communities no matter which state they reside in, Clyburn said.

“At the end of the day this is affecting way too many people and it’s not an isolated incident,” she said. “The only way we can actually get in front of it is coming together as one region and one voice of all races and representations to say, ‘No more.’”

“We’re working on the same types of issues, and separately we don’t have the power,” said Virginia Woulfe-Beile of the Piasa Palisades Sierra Club in Alton. “We’re stronger together, and it’s a lot about building power and getting political will.”

One of the first results of this budding collaboration came when environmental and community-based organizations from Missouri and Illinois gathered recently at the McKinley Bridge to denounce regional air pollution.

“They’re both huge environmental justice areas that have been left behind for decades,” she said. “There’s a lot to clean up, and we have to do that together.”

“Nothing else matters if we can’t breathe,” said St. Louis Ward 3 Alderman Brandon Bosley. “Every single breath we take in is killing us. My children have asthma, my sisters have asthma.”

Ward 3 Alderman Brandon Bosley speaking at a rally for clean air in Venice, Illinois, on July 24. Bosley said he wants St. Louis to use COVID relief money to purchase air monitors for the community.

“Oppression takes many shapes and forms; it doesn’t have to be behind prison doors,” said Pastor Norma Patterson of Good Shepherd Faith United Church of Christ. “Oppression is in the air when it’s time for you to go to sleep at night and you can’t breathe.”

Other East St. Louis residents shared how their children can’t play outside on some days because the air quality is so poor.

“I don’t think I’ve been personally aware, and I think a lot of us on the St. Louis side haven’t been as aware, of what the challenges are on the East St. Louis side,” said Sister Delores Sanchez, an environmental justice organizer with Metropolitan Congregations United in St. Louis.

That dynamic is different now that her organization has ties with United Congregations of Metro East, she said.

“It doubles our reach in terms of knowledge of what the issues are,” Sanchez said. “As we share information, we can gain more clarity and share ideas for how to approach situations or challenges that we might have.”

“We share the same air, the same waterways and the impact of pollution and climate change hurts us together like a one-two punch,” Atty said. “If one state fails, both states fail.” 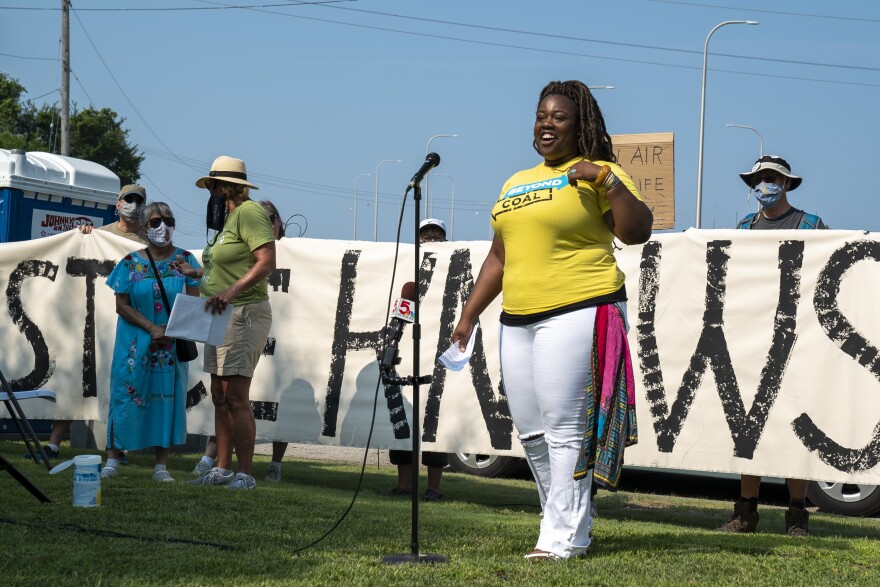 Leah Clyburn speaks to the crowd at the McKinley Bridge roadside park on July 24, emphasizing how pollution issues in the St. Louis region transcend state lines.

Sharing personal experiences with pollution is a way to build community between parts of the bi-state that have long been divided, Clyburn said.

“When you find out that you’re not crazy and other people are feeling and seeing this too, that in itself is liberating,” she said.

Clyburn has heard nearly identical stories from people living in rural and urban areas of Missouri who feel alone in their struggle with different forms of pollution.

“So often in our legislature folks are given dog whistles,” she said. “Whether it is the stereotype of the ‘redneck farmer’ to the ‘welfare queen.’ But no one’s listening to either one.”

The same dynamic repeated itself when she started working more closely with groups in Illinois, Clyburn said.

Organizing across state lines also builds clout for environmental groups and helps the St. Louis region speak with a unified voice when pushing for changes in Springfield, Jefferson City or locally, Woulfe-Beile said.

“The most compelling thing a lawmaker can hear is someone’s personal story,” she said. “Even if that story is about someone in Alton and we’re in Jefferson City, they still know we’re breathing that same air and we’re using that same water to sustain our lives.”

Woulfe-Beile said she already feels power building from the fresh ties between groups in the Metro East and St. Louis and expects to leverage it for specific legislation or reform for certain industries.

“If we’re ever going to move away from fossil fuels, it’s got to be a huge collective effort because it is an uphill battle,” she said.

Eric Schmid covers the Metro East for St. Louis Public Radio as part of the journalism grant program: Report for America, an initiative of The GroundTruth Project.

(The Center Square) – A year after Democrat auditor Nicole Galloway’s audit revealed an employee stole $316,887 from the city of Center in northeast Missouri, a follow-up report found only slight … END_OF_DOCUMENT_TOKEN_TO_BE_REPLACED

JEFFERSON CITY, Mo. – The average number of COVID-19 cases is at a seven-week low. The 7-day rolling average for cases in Missouri sits at 1,387; yesterday, it was 1,435. Exactly one month ago, the … END_OF_DOCUMENT_TOKEN_TO_BE_REPLACED

Chad Niezing of Manchester captured the title Sunday in the Missouri Mid-Amateur Championship at Jefferson City Country Club. Niezing opened with a 67 on Saturday before carding a 70 on Sunday to win … END_OF_DOCUMENT_TOKEN_TO_BE_REPLACED

Terri Blevins, 44, registers for help at an event sponsored by the city of St. Louis with the Metropolitan St. Louis Equal Housing and Opportunity Council to assist people with filing their … END_OF_DOCUMENT_TOKEN_TO_BE_REPLACED