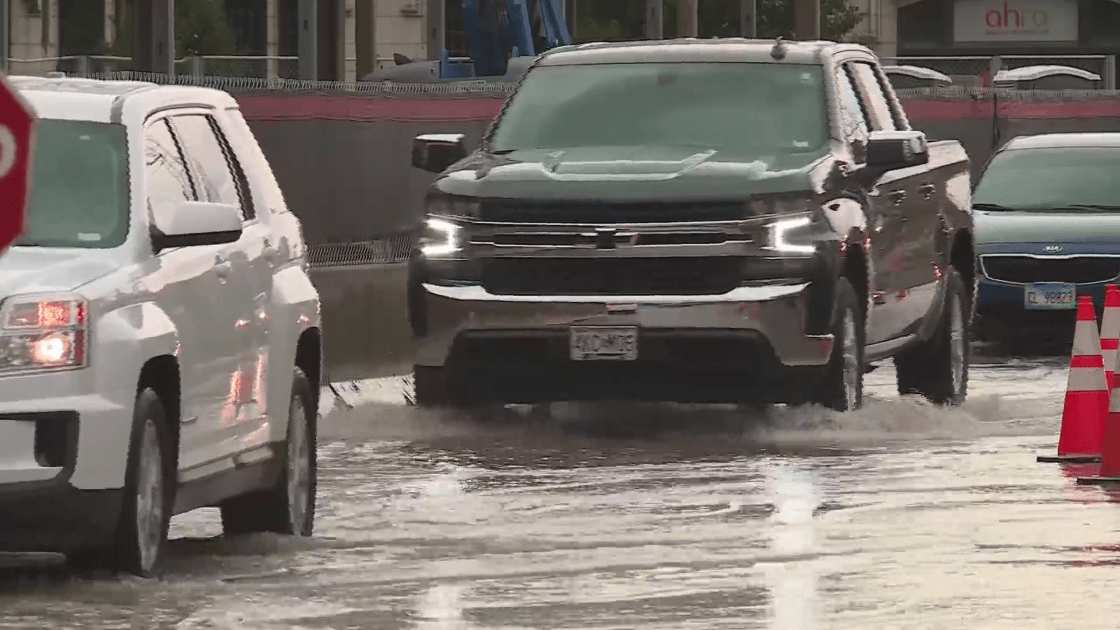 ST. LOUIS – Water was shooting through the intersection of Arkansas and McKean avenues Monday afternoon. A neighbor recorded the video on her phone and notified city officials so repairs could be made.

An MSD spokesperson tells us that area has an old stormwater drain system that works like a pressure valve and in rare cases when the water has nowhere to go, it can penetrate the pavement.

The neighbor who recorded the video, recorded a similar video last year.

The afternoon downpour also sent creek water rising along Kirkham Road in Webster Groves. Water covered the road as some drivers tried to travel through the flooding.

An old catalpa tree on Catalpa Avenue in Webster Groves fell soon after the heavy rain fell. It struck the front of Cyndy Beer’s home. She and her wife were able to safely get outside. Beer suspects the water was just too much for the tree to handle.

“I think that they got stressed and just oversaturated,” she said.

(The Center Square) – A year after Democrat auditor Nicole Galloway’s audit revealed an employee stole $316,887 from the city of Center in northeast Missouri, a follow-up report found only slight … END_OF_DOCUMENT_TOKEN_TO_BE_REPLACED

JEFFERSON CITY, Mo. – The average number of COVID-19 cases is at a seven-week low. The 7-day rolling average for cases in Missouri sits at 1,387; yesterday, it was 1,435. Exactly one month ago, the … END_OF_DOCUMENT_TOKEN_TO_BE_REPLACED

Chad Niezing of Manchester captured the title Sunday in the Missouri Mid-Amateur Championship at Jefferson City Country Club. Niezing opened with a 67 on Saturday before carding a 70 on Sunday to win … END_OF_DOCUMENT_TOKEN_TO_BE_REPLACED

Terri Blevins, 44, registers for help at an event sponsored by the city of St. Louis with the Metropolitan St. Louis Equal Housing and Opportunity Council to assist people with filing their … END_OF_DOCUMENT_TOKEN_TO_BE_REPLACED