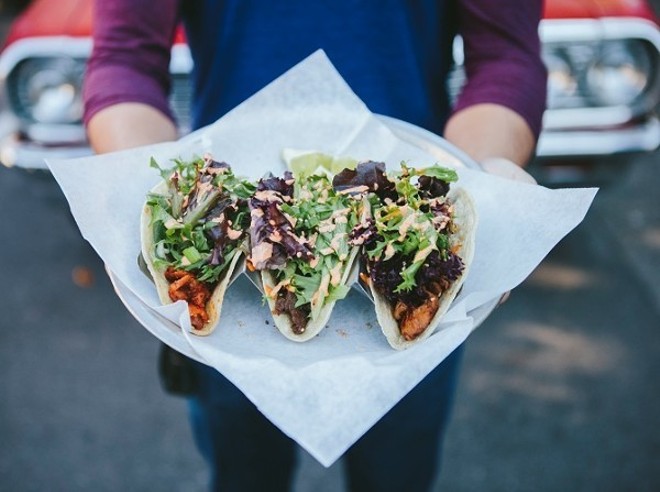 Ten years ago, David Choi opened the window of his food truck, Seoul Taco (multiple locations including 6665 Delmar Boulevard, University City; 314-863-1148), at a popular local food truck festival and got absolutely crushed by the demand for his Korean tacos. Since then, he’s grown into a beloved brand with brick and mortar outlets throughout Missouri and Chicagoland. To show his appreciation to everyone who has supported him along the way, he’s throwing an epic anniversary party in the Grove, featuring food, art and none other than hip-hop icon Ghostface Killah.

The event, billed as “Seoul Taco’s 10th Anniversary Block Party,” will occur on June 19th in the Grove. Beginning at 3 p.m. attendees will enjoy a lineup of entertainment, including DJ Vthom, Loop Rat, Mvstermind, Mai Lee and headliner Ghostface Killah, who is slated to go on at 9 p.m. The event will also feature Secret Walls, a live graffiti battle between artists from Missouri and Illinois, set to a DJ.

“I didn’t know if this party was going to happen, but I always envisioned doing something large,” Choi says. “Our inspiration came from Dave Chappelle’s Block Party. I wanted to do something like that for our ten-year [anniversary] even before the pandemic and was unsure if it was going to happen until the vaccine rollout made it possible. We just really wanted to thank the folks that have supported us — especially over the past year. We’re just so thankful and wanted to give back by throwing a big party.”

Choi founded Seoul Taco ten years ago as a way to share his Korean food culture with St. Louis. A pioneer in the city’s food truck scene, Choi was also determined to bring both mobile cuisine and street food to town. Though he succeeded tremendously, Choi admits that he did not have some master plan going into it — he was simply putting one foot in front of the other and seeing what worked.

“I feel like there were a lot of staples in St. Louis that people navigated to, and I knew there was support for local businesses, but there weren’t too many options for Korean food back then,” Choi explains. “I wanted to do it in a fun way. If someone asked me then — even now — what my five or ten-year plan was, I wouldn’t be able to tell them. That’s never been the way I operate; it’s too boxed-in for me. I just go with the flow and see what happens.”

What’s happened for Seoul Taco is that it’s become a vibrant brand, going from one truck with one employee to a truck, seven outlets and one hundred employees. According to Choi, the growth of his business has been both heartening and surprising.

“It sort of feels like it was just yesterday, it boggles my mind that it’s been ten years,” Choi laughs. “We’ve learned a lot from past traumas — and shitty Yelp reviews.”

In addition to the art and music and, of course, Seoul Taco, the anniversary block party will feature food from other area restaurants, including Balkan Treat Box, Nudo House x Mai Lee, Pappy’s Smokehouse and Chao Baan. Drinks from Takashima Record Bar and STL Barkeep will also be available. Entry to the event is free; food and beverages must be purchased from the individual vendors.

“This is like a mini festival, and anything that I do, I want our friends to be involved in as well,” Choi says. “Support goes deeper than just from customers; it involves small business too. If we aren’t all winning together, it’s pointless. And who knows — if this is a success, it could organically turn into a regular Seoul Taco fest.”

Walker noted that the reason Black women put health on the back burner is because of the “strong Black woman” phenotype that many find themselves in ST. LOUIS — Black … END_OF_DOCUMENT_TOKEN_TO_BE_REPLACED

Here's your guide to what's happening on Wednesday at the Olympics, and what St. Louis connections will be in action ST. LOUIS — The Tokyo Olympics are finally here and 5 … END_OF_DOCUMENT_TOKEN_TO_BE_REPLACED