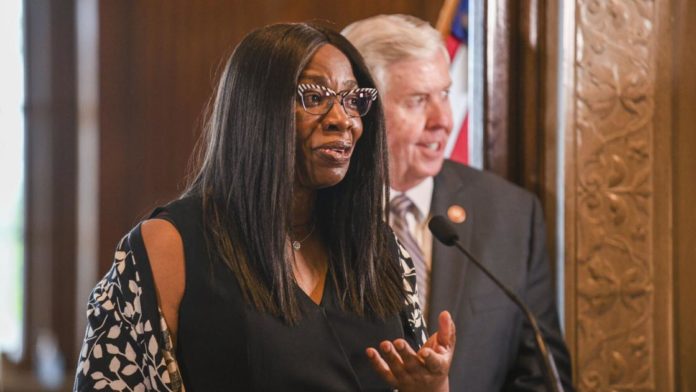 “I can’t cure all of the social ills and injustices that are out there, and this appointment won’t do that,” Ransom said. “What this appointment does show is that this governor has the courage to make such an appointment, that he has great vision for this state, and he knows how great this state is and what this state can be.”She also emphasized that she is defined by more than her race.“I have never lived by a label or by any identity that anyone’s tried to put upon me,” she said. “When I look in the mirror, I’ve always been Robin. And I’ve always lived my life to be kind to everyone and to be the best person that I can be.”Parson noted the historic appointment but said the hard work she’s done is what earned her the position.“She was the best qualified candidate for the Supreme Court,” Parson said, “and that’s why she was chosen for the position.”Parson said it helped that he previously met Ransom when he appointed her in 2019 to serve as an appeals court judge. He said he wasn’t sure what day she will leave her position on the Eastern District Court of Appeals and start work at the Supreme Court in Jefferson City.Former Republican Gov. Matt Blunt first appointed Ransom to serve as a St. Louis County circuit judge in 2008.
>>> Don’t Miss Today’s BEST Amazon Deals!

A Jefferson City woman died Saturday after she was thrown out of a boat as it was traveling along the Missouri River.Tanna R. Henson, 48, was pronounced dead at 11:10 p.m. at University Hospital in … END_OF_DOCUMENT_TOKEN_TO_BE_REPLACED

JEFFERSON CITY, Mo. (AP) – Missouri is at risk of losing $4.5 billion in tax revenue and federal funding for Medicaid because of a fight between lawmakers over contraceptives.At issue is a state tax … END_OF_DOCUMENT_TOKEN_TO_BE_REPLACED