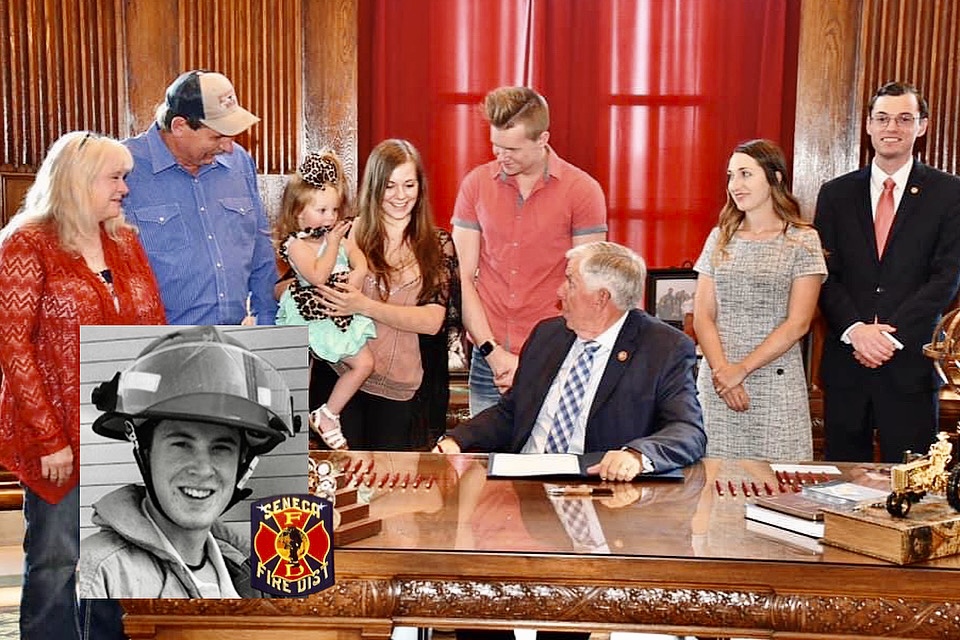 Deaton releases images on social media of the ceremonial signing. The Casey Family including Tyler’s parents, siblings and niece were in attendance. “Kyle, Rayma, Kyla, Layne: it was a privilege to visit with you today and see Tyler receive this appropriate recognition. I also want to thank Darren King (Seneca Fire District, not pictured) who asked me to pursue this legislation and has been working for some time to make it a reality.”

DEATON WRITES… “Following in his stepfather’s footsteps‚ Tyler became a volunteer firefighter and trained storm spotter with the Seneca Area Fire Protection District. On the evening of Saturday, May 10‚ 2008‚ a county-wide call went out for storm spotters to mobilize for severe weather and possible tornadoes. Firefighter Casey responded to the dispatch and was assigned by the incident commander to a post near the intersection of Highway 43 and Iris Road.

While at the intersection, his assigned spot, he left his vehicle to alert a family that was parked on the side of the road watching the weather condition and it was at this exact time‚ the tornado headed straight for them. The family managed to escape‚ but Tyler was caught in the path of the oncoming tornado as it struck. He sustained serious injuries, had to be extricated from his vehicle, was rushed to Freeman Hospital in Joplin, MO; but, sadly, on Monday, May 12, 2008, Tyler succumbed to his injuries.

Tyler Casey became a firefighter hero that day as he is credited with saving the lives of at least three people before he was injured. He sacrificed his life so that others would live.

(The Center Square) – A year after Democrat auditor Nicole Galloway’s audit revealed an employee stole $316,887 from the city of Center in northeast Missouri, a follow-up report found only slight … END_OF_DOCUMENT_TOKEN_TO_BE_REPLACED

JEFFERSON CITY, Mo. – The average number of COVID-19 cases is at a seven-week low. The 7-day rolling average for cases in Missouri sits at 1,387; yesterday, it was 1,435. Exactly one month ago, the … END_OF_DOCUMENT_TOKEN_TO_BE_REPLACED

Chad Niezing of Manchester captured the title Sunday in the Missouri Mid-Amateur Championship at Jefferson City Country Club. Niezing opened with a 67 on Saturday before carding a 70 on Sunday to win … END_OF_DOCUMENT_TOKEN_TO_BE_REPLACED

Terri Blevins, 44, registers for help at an event sponsored by the city of St. Louis with the Metropolitan St. Louis Equal Housing and Opportunity Council to assist people with filing their … END_OF_DOCUMENT_TOKEN_TO_BE_REPLACED