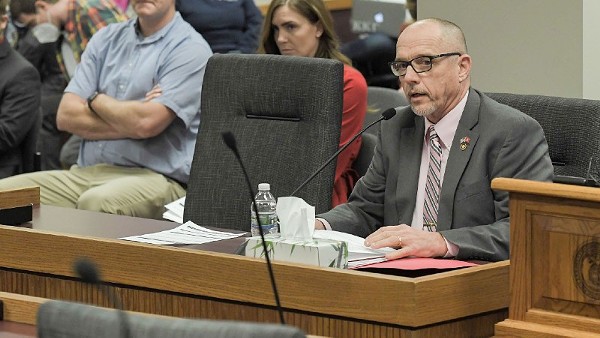 The most telling witnesses last week in testimony over House Joint Resolution 53 were the ones who didn’t show up.

HJR 53 would put to voters in November 2022 a red-meat constitutional amendment to prohibit transgender kids from participating in Missouri high school sports based on their gender identity as opposed to their gender assigned at birth. Its supposed intent: to protect future athletes from becoming harmed by unfair competition from future transgender athletes.

But not a single high school athletic director, coach, athlete or interscholastic sports official showed up to lend their voice in support of HJR 53. Most witnesses who testified at hearings on the bill were trans kids and their parents making the simple pleas they should never have had to make: Just let us be ourselves. Just let us enjoy the same opportunities for sports participation that other students do.

The silence of the state’s high school sports community spoke volumes. There have been no recorded cases suggesting that past or present athletes in Missouri have faced unfair competition from transgender kids. That hardly cries out for the need to protect future ones.

The subject is addressed by the Missouri State High School Activities Association in its rules. While Missouri hasn’t gone out of its way to be especially friendly to trans athletes by the measure of trans advocates, no one outside the political class seems to have found a crisis.

This is the dictionary definition of a solution in search of a problem, aimed at pushing the heartstrings of base voters not fond of dictionaries, much less LGBTQ people. All politics and no substance, the effort to make a stand for transphobia is the Missouri GOP’s obedient contribution to the national Republican culture war. The state perpetrators need not be accused of having advanced independent thought.

That said, Missouri Republicans have advanced an interesting wrinkle that is most revealing. Rather than use their overwhelming supermajorities to attack trans kids through legislation now, the Republicans have decided to wait to make it a bigger political show.

HJR 53 does nothing for the moment. Rather, it would place on the November 2022 statewide ballot a constitutional amendment to limit transgender students to participating only on sports teams matching their gender assigned at birth or — in the words of the bill — their “biological sex.” That’s another way of telling trans kids “you are who we say you are.”

How convenient: a red-meat ballot item to coincide with the next general election in which the next statewide Republicans will need to muster the troglodyte wing of the party.

There’s your canary in this particular coal mine. Somehow the cultural emergency that has righteous Republicans foreseeing End Times for high school athletics isn’t such a crisis that it can’t wait a couple of seasons. Rather, the bill advanced by Rep. Chuck Basye of Boone County is designed to wait until it can provide maximum political punch.

But the bill also exposes a different kind of crisis: the battle for the soul of the Republican Party. As far right as the party has drifted in recent years, there are some “brave souls” — in the words of Democratic state Rep. Ian Mackey of St. Louis County, a leading LGBTQ voice — who might keep it from passage. Mackey called out Rep. Shamed Dogan (R-Ballwin) among others as an example.

So it remains to be seen if voters will be voting to attack trans youth in 2022. Regardless, the emotional testimony at the hearings last week showed that the plight of transgender students is real and present.

Brandon Boulware, who has a transgender daughter, struggled to accept the change but realized the damage the bill could do, according to the Fox 2 report.

“This language, if it becomes law, will have real effects on real people,” Boulware said. “It will affect my daughter. It will mean she cannot play on the girls’ volleyball team, dance squad or tennis team. It will mean she will not have the opportunity that all of us had to be part of a team.”

Those comments are particularly on point because they speak from the heart about the underlying reality that the Republican politicians so callously and arrogantly deny — with stunning irony — in the name of their Christian faith: that these are just high school kids who want to be treated like any other high school kids.

Transgender students aren’t trying to cheat anyone or get an unfair advantage. To the contrary, they’re just hanging on. As is widely known, the rates of depression and suicide are dramatically higher for this vulnerable population. Special treatment? This is more about survival.

The Republican talking points in the culture war suggest that transgender people are on some mission to destroy the concept of gender in America. But what the testimony of HJR 53 laid bare is just the opposite: Transgender students and their families are concerned with living their own lives and pursuing their own passions and happiness, just like their peers.

“This is just a nasty, ugly attack on transgender youth in our state,” says Mackey. “We know that trans kids have an unbelievably disproportionate percent of suicide attempts and actual suicide completion in comparison with non-transgender kids of the same age group. We also know that laws that essentially erase these kids and that tell them they don’t exist just make it worse.

“I think that, thank goodness, being homophobic is no longer in vogue. But somehow attacking trans kids is. Trans kids are the new target, the new political red meat. It’s crap.”

Yes, it is. And it’s going to get worse before it gets better in states like Missouri unless and until people realize a basic truth exposed by HJR 53: The problem isn’t transgender people just trying to be who they are.

Ray Hartmann founded the Riverfront Times in 1977. Contact him at rhartmann1952@gmail.com or catch him on Donnybrook at 7 p.m. on Thursdays on the Nine Network and St. Louis In the Know With Ray Hartmann from 9 to 11 p.m. Monday thru Friday on KTRS (550 AM).

LAKE OZARK, Mo. (AP) — Two men from Jefferson City have been charged in the death of a man at the Lake of the Ozarks over Memorial Day weekend. Craig Hawkins Jr., 23, was charged Thursday with … END_OF_DOCUMENT_TOKEN_TO_BE_REPLACED

Mueller Furniture owner Mark Mueller cuts the ribbon at the fourth-generation retailer’s newest store in Ellisville, Mo., a suburb of St. Louis. BELLEVILLE, Ill. — With locations on the eastern and … END_OF_DOCUMENT_TOKEN_TO_BE_REPLACED

Children and their families made memories petting animals, learning how to milk a cow and playing in tubs of corn and soybeans Thursday morning at the Jefferson City Jaycees Cole County Fair. Cole … END_OF_DOCUMENT_TOKEN_TO_BE_REPLACED

"I was afraid to go back to school, so I told my parents I wanted to get a vaccine," said 13-year-old, Addison Cousins ST. LOUIS — In February, Toni Cousins' husband got … END_OF_DOCUMENT_TOKEN_TO_BE_REPLACED

A Jefferson City man was charged Wednesday after a chase with authorities.Darryl Mallory, 29, is charged with forgery, fraudulent use of a credit device and resisting a lawful detention.A Jefferson … END_OF_DOCUMENT_TOKEN_TO_BE_REPLACED