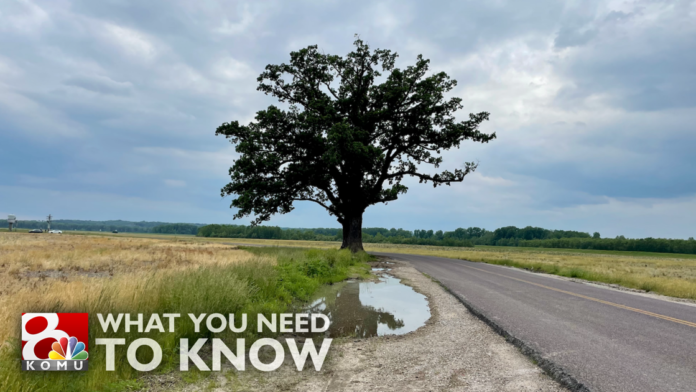 The Big Tree owner hopes for more security and parking lot soonJon Sam Williamson and his family have owned “The Big Tree”, Boone County’s longest-standing landmark, since 1835.The tree has survived flooding, a lightning strike and multiple instances of vandalism. In order to keep the tree thriving for years to come, Williamson hopes to add a parking lot and surveillance cameras near the tree.The details are still being worked out, but Williamson’s family and the community are working together to make the changes happen.Possible suspect in Lazy Gators shooting arrested on drug chargesCamden County Sheriff’s deputies identified a Jefferson City man as a possible suspect in Saturday’s Lazy Gators shooting which left one dead.Chad Brewer was charged with delivery of a controlled substance and unlawful possession of drug paraphernalia. Special Olympics summer games return to mid-Missouri after two yearsAfter two years, the Missouri Special Olympics are back. A 2019 tornado damaged SOMO’s Training for Life campus, which ripped the roof off the gymnasium and blew out several windows and doors. SOMO was also unable to host its summer games last year due to the COVID-19 pandemic.Carol Griffin, health partnership manager for SOMO, said this year will be the first time many athletes have been able to participate in two years.The organization will host the summer games, its first state game since the tornado, this weekend. The games will be hosted on Saturday, June 5, at Hickman High School.Missouri ranks in top 10 states for nursing employmentMissouri is ranked at No. 8 in the nation for best places to work as a nurse, according to a study done by Wallethub.The nursing industry is expected to grow at almost double the rate of the average occupation through 2029, according to the U.S. Bureau of Labor Statistics.Compared to surrounding states, Missouri is ranked second, following Illinois, in annual mean wages for registered nurses. Missouri’s annual mean wage is currently at $65,130, while Illinois is at $73,890.Cooper County authorities search for bank robbery suspect

Success! An email has been sent to with a link to confirm list signup.

Error! There was an error processing your request.

Pilot Grove Police and Cooper County Sheriff’s deputies are searching for a suspect who robbed Alliant Bank at gunpoint Wednesday morning.According to a Facebook post from Sheriff Chris Class, deputies arrived on scene around 10:11 a.m. to assist the Pilot Grove Police Department with the armed robbery. The FBI Kansas City division released a photo of the suspect later after the incident.The release says the suspect entered the bank and displayed a handgun. The suspect was described as a white male, approximately 6 feet 1 inch and medium build. He was wearing a burgundy button up style shirt/jacket with black hoodie underneath, black pants, black boots, navy and white ballcap with an emblem and burgundy bill, sunglasses, gloves and a light colored face mask.The suspect was last seen fleeing on foot in a northwest direction with an undisclosed amount of currency in a blue tote bag.JCPD asking for help after church burglarized, damagedJefferson City Police are investigating a burglary and destruction of property that occurred May 31 at a Jefferson City church, located at 1905 St. Mary’s Boulevard.The burglary and property damage occurred around 10:25 p.m. Monday at the Christian Fellowship Church, according to a news release.JCPD is asking for the public’s help in identifying the female suspect seen stealing from within the church and setting fire to a cross within.How Columbia compares to other areas in number of traffic stops for Black driversThe Missouri Attorney General released a report earlier this week detailing traffic stops across Missouri and breaking them down by race. The report uses a handful of stats to show how many traffic stops have taken place, what the result of those stops was, and what race is of the driver involved. The data dates back to 2000 and the data released earlier this week was from 2020.In Columbia, Black drivers are pulled over at a disproportionally high rate. The statistic used to determine that is called the disparity index. Disparity index is calculated by the proportion of traffic stops of a specific race divided by the proportion of the race included in the city’s population (Disparity index = (proportion of stops / proportion of population).The baseline disparity index is one. Values greater than one indicate over-representation in the share of stops relative to local population. Values less than 1 indicate under-representation.Drivers in Columbia were pulled over 7,772 times in 2020. Black drivers accounted for 2,732 of those. This creates a disparity index of 3.41. Over the past 5 years, that number is up 0.44. For comparison, white drivers were pulled over 4,862 times, but since the white population is much greater in Columbia, that creates a disparity index of 0.78. That number is down 0.04 over the past 5 years.First Alert Weather Forecast

KANSAS CITY, MO (KCTV5) — The investigation into the police shooting of Malcolm Johnson has cleared another step. The case file for the Missouri Highway Patrol is now in Jefferson City, according … END_OF_DOCUMENT_TOKEN_TO_BE_REPLACED

Progress is slow on redeveloping the area around Capitol Avenue, but the revitalization of the Capital City’s historic corridor is starting to show the results of some much needed love.The East … END_OF_DOCUMENT_TOKEN_TO_BE_REPLACED

A new gaming venue in Jefferson City is hoping to create a safe, comfortable space for all local gamers to enjoy.Mimics JC held a soft opening last weekend at its new spot at 312 Lafayette St. as the … END_OF_DOCUMENT_TOKEN_TO_BE_REPLACED