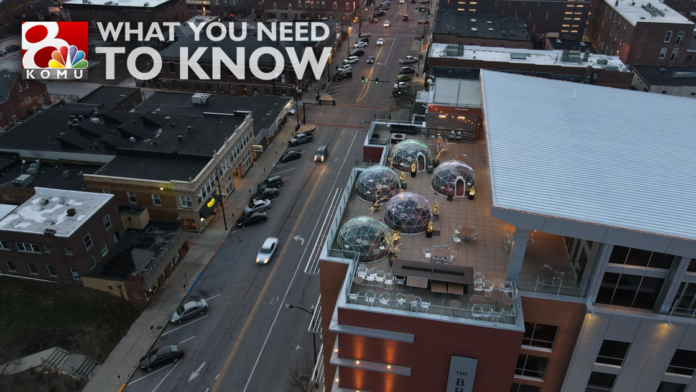 Columbia businesses prepare differently for expiring health orderStarting Wednesday, businesses in Columbia will be able to set their own guidelines on masks and social distancing. Boone County Health Director Stephanie Browning and Columbia Mayor Brian Treece announced last week that the city would not extend the current health order after it expires at 11:59 a.m. on May 12. This is due to declining COVID-19 cases and hospitalizations. The Columbia/Boone County Health Department said it will give recommendations rather than orders. “Wearing masks, social distancing, and avoiding mass gatherings are still the best ways to keep our loved ones safe,” Browning said at the briefing last week. “We’ll keep working on education and vaccination.”Police arrest man allegedly involved in 2017 homicide of Augustus RobertsColumbia Police announced Tuesday they arrested a suspect allegedly involved in the 2017 homicide of Augustus Roberts.Police say they arrested Columbia resident Jeffrey McWilliams, 28, for the charges of second degree murder, first degree robbery and armed criminal action. Roberts was found dead at a home he was renting in the 1900 block of Lasso Circle, in the Old Hawthorne neighborhood, on Dec. 11, 2017. Officers arrived on scene around 3:37 a.m. and found Roberts unconscious and not breathing. Officers rendered aid until medical personnel arrived and pronounced Roberts dead. Investigators believe this home invasion is drug-related.Missouri to end pandemic related unemployment benefitsGovernor Parson says Missouri will withdraw from all six federal unemployment benefit programs related to the COVID-19 pandemic effective Saturday, June 12.Parson says it comes as Missouri has 221,266 known jobs open.“From conversations with business owners across the state, we know that they are struggling not because of COVID-19 but because of labor shortages resulting from these excessive federal unemployment programs,” Governor Parson said. “While these benefits provided supplementary financial assistance during the height of COVID-19, they were intended to be temporary, and their continuation has instead worsened the workforce issues we are facing. It’s time that we end these programs that have ultimately incentivized people to stay out of the workforce.” Riverside Park Amphitheater finishes construction, looks ahead to first live concert on May 22A slew of live music tours and dates canceled or postponed looks to be in the rear-view mirror with the completion of the Riverside Park Amphitheater in Jefferson City. “With everything we’ve been through, I don’t think the timing could be more right,” said Todd Spalding, the director of Jefferson City Parks.Spalding said the desire within the Jefferson City community and beyond to get back to live events is evident.”People want to get back out, they want to see people, they want to listen to live music,” Spalding said. “The community really wants this.”Redeem Project announces new program, anticipates increase in membersRedeem Project Ministries celebrated their 11th anniversary on Tuesday with the announcement of a new project.The Captive Grace Program is the newest initiative undertaken by Redeem Project Ministries, which focuses on providing support and care for individuals – specifically women – involved in human trafficking.This is the first project under the Jefferson City-based organization that will begin to reach into Boone County, expanding the programs reach farther into mid-Missouri.

A Jefferson City woman died Saturday after she was thrown out of a boat as it was traveling along the Missouri River.Tanna R. Henson, 48, was pronounced dead at 11:10 p.m. at University Hospital in … END_OF_DOCUMENT_TOKEN_TO_BE_REPLACED

JEFFERSON CITY, Mo. (AP) – Missouri is at risk of losing $4.5 billion in tax revenue and federal funding for Medicaid because of a fight between lawmakers over contraceptives.At issue is a state tax … END_OF_DOCUMENT_TOKEN_TO_BE_REPLACED