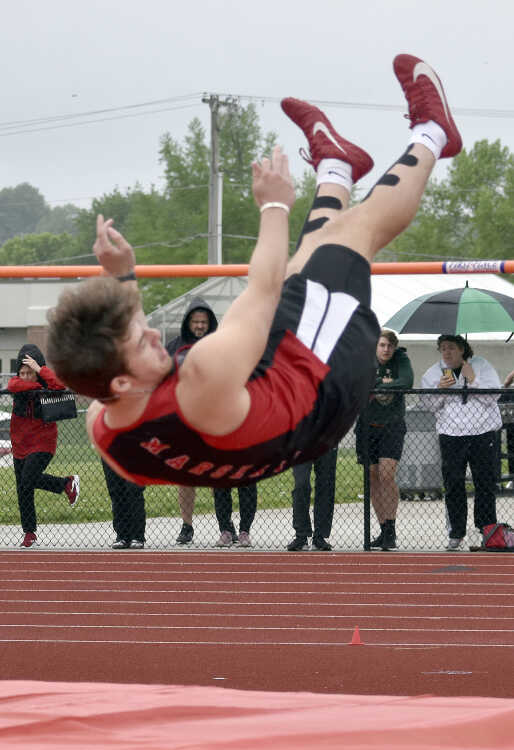 With a personal record in the high jump, Marshall senior Braeden Bersano qualified for his first state meet.Chris Allen/Democrat-NewsODESSA  Marshall senior Braeden Bersano and junior Jada Lance both set personal records while qualifying for state Saturday during the Class 4, Section 4 Championships at Odessa.
Conditions couldnt have been much worse for the meet  cold, windy and wet  which prompted several delays, proving costly for the Owls.
First up was Bersano, who made six straight jumps to clear 1.87 meters, his career-best. At that point, he had made the top four to survive and advance, his goal for the day. He made one tried at 1.92 meters, but with heavy rain the apron was getting slick and he decided not to continue in order to avert injury  finishing in fourth place.
The girls pole vault started more than an hour behind schedule and sophomore Alexis Neff, who made her first four tries to 2.25 meters, placed sixth. It would have taken 2.55 meters, well above her personal record of 2.28, to have made the cut.
Lance set a new standard with a time of 12.72 seconds in the 100-meter dash, 1.01 seconds behind Raytown South sophomore Zaya Akins, for second place. Late in the day, she also improved her time in the 200 to 27.21 seconds, but placed fifth  .17 seconds from qualifying.
Lance was due to anchor Marshalls 400-meter relay behind senior Brook Borchers, freshman Ava Shepard and Neff, but didnt get the chance. The event was due to start at 1:40, but by 3 p.m. was not close to starting  forcing Neff to withdraw since she had to be at the Missouri State High School Rodeo Finals in Carthage three hours later (more on that in Fridays Democrat-News).
Since the Lady Owls had no substitute, they had to scratch.
Bersano and Lance will compete Friday in the MSHSAA Class 4 Championships at Jefferson City.
Class 1
JEFFERSON CITY  Sweet Springs claimed six medals Saturday during the MSHSAA Class 1 Championships at Jefferson City.
The Greyhounds went into the meet with nine boys entries, winning four medals. The 400-meter relay of seniors Grant Knipmeyer and Cole Fogarty and juniors Matt Eckhoff and Cole Lovercamp placed fourth, the 1,600 relay of Lovercamp, junior Noah Fogarty and seniors Ethan Sims and Cole Murphy finished third and the 3,200 relay of Sims, Murphy, Noah Fogarty and junior Jared Brewer came in fourth.
Senior Wade Phillips tied for third in the high jump, in which he won at the sectional. Junior Jaleyn Winfrey medaled in her two events, placing seventh in the 200 and eighth in the 100.
Three Sweet Springs boys missed the cut by one spot with ninth-place showings.
Sophomore Neveah Ballenger led the Santa Fe girls with a bronze medal in the 300 low hurdles, while freshman Molly Malter got in under the wire with eighth in the 3,200. The Chiefs had only two boys entries, with sophomore Cole Hostetter finishing ninth in the long jump.
Senior Keegan Zdybel won Slaters only individual medal with fifth in the high jump. He kicked off the Wildcats fifth-place 800 relay ahead of junior JaKorie Terrill and freshmen Kenyon Minnis and Devon Moore.

KANSAS CITY, MO (KCTV5) — The investigation into the police shooting of Malcolm Johnson has cleared another step. The case file for the Missouri Highway Patrol is now in Jefferson City, according … END_OF_DOCUMENT_TOKEN_TO_BE_REPLACED

Progress is slow on redeveloping the area around Capitol Avenue, but the revitalization of the Capital City’s historic corridor is starting to show the results of some much needed love.The East … END_OF_DOCUMENT_TOKEN_TO_BE_REPLACED

A new gaming venue in Jefferson City is hoping to create a safe, comfortable space for all local gamers to enjoy.Mimics JC held a soft opening last weekend at its new spot at 312 Lafayette St. as the … END_OF_DOCUMENT_TOKEN_TO_BE_REPLACED