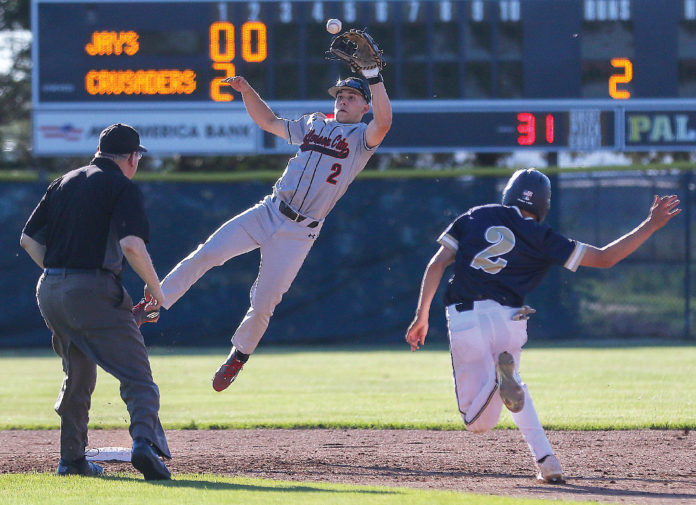 In the first inning, the Helias Crusaders got hits and got hit.
Jefferson City’s Case Hager took over from there.
Hager got the Crusaders to swing at high fastballs and low breaking balls, cleanup batter Jacob Roettgen came up with a key hit and the Jays capitalized on two errors to put an end to a four-game losing steak with a 4-2 victory Friday night at the American Legion Post 5 Sports complex.
“I knew if we got some run support it was going to be Case Hager’s game,” Jefferson City coach Kyle Lasley said.
That support came in the third inning when No. 9 batter Eli Moreland got on with a one-out single to left field to give the top of the lineup an opportunity to rally from a 2-0 deficit.
Connor Earleywine followed with one of his three singles and Roettgen brought Moreland and Earleywine in by slapping a ground ball to right field for a two-RBI single.
“When they had guys in scoring position they got them in and we didn’t do it,” Helias coach Chris Wyrick said.
Earleywine scored the next two runs for the Jays, leading off the fifth with a single to right field and eventually scoring after a pickoff throw to third base sailed into foul territory.
In the seventh, Earleywine went the other way to left field for a one-out single, advanced to second on a pitch in the dirt, stole third and scored when a Joe Hoerchler grounder went off the third baseman’s glove to reach on an error.
“I like our chances to score when he’s out there,” Lasley said of Earleywine. “Just got to keep getting him on.”
Helias got the tying run in scoring position in the seventh after back-to-back singles for Quinton Baker and Jake Weaver plus a fielding error.
Hager then got the next batter to fly out to shallow center field to take away a chance for the runners to tag up and ended the game by getting a Crusader to fly out to left field.
“I had complete faith that Case was going to get us out of it,” Lasley said.
Helias scored both of its runs in the first, getting a one-out single from Weaver followed by a walk, a hit by pitch and an RBI single from Sam Schell.
“We were aggressive in that first inning,” Wyrick said. “We were attacking the fastball, we were laying off to breaking ball out of the zone.”
Brandon Scheulen was hit by a pitch with the bases loaded to make the score 2-0.
“We were trying to get in on their hands with fastballs because they were up on the plate, but we did get a good job of responding,” Lasley said.
The Crusaders added five more hits the rest of the way, but left a runner at third in the second and third innings and had a runner get caught between third base and home plate in the sixth on a ground ball to the left side.
“We probably didn’t have a play at first base,” Lasley said. “We were hoping (third baseman Brayden Whittle) didn’t throw it. And he gave a pretty good arm fake and then from there we just do what we do in practice, just play catch, one or two throws and bang.”
Hager struck out eight, including two each in the third and fourth innings, walked one and allowed two runs and seven hits in a complete game.
Nate Roark got off to an efficient start on the mound for the Crusaders, only allowing one baserunner while throwing 25 pitches in the first two innings. He pitched five innings, allowing three runs (two earned) on seven hits with three strikeouts.
“When Nate’s hitting his spots he’s hard to square up,” Wyrick said. “He was keeping them off-balance with his fastball and changeup.”
The remaining two innings went to Cole Peters, who struck out three and walked one while allowing an unearned run and a hit.
“Those are our 1-2 right there and they gave us a chance to win,” Wyrick said.
Weaver finished with three hits, including two singles and a double, while Schell had a double and a single.
Helias (11-7), now 1-2 in the Central Missouri Activities Conference, will host Capital City (3-10, 0-4) at 5 p.m. Wednesday.
Jefferson City (15-9, 2-2) will head to Sedalia today to face Smith-Cotton and Excelsior Springs.
Helias won Friday’s JV game 7-2. David Hofherr had two hits and Carson Hayes drove in a pair of runs for the Crusaders. Isaac Enloe had a hit and two RBI for the Jays.

KANSAS CITY, MO (KCTV5) — The investigation into the police shooting of Malcolm Johnson has cleared another step. The case file for the Missouri Highway Patrol is now in Jefferson City, according … END_OF_DOCUMENT_TOKEN_TO_BE_REPLACED

Progress is slow on redeveloping the area around Capitol Avenue, but the revitalization of the Capital City’s historic corridor is starting to show the results of some much needed love.The East … END_OF_DOCUMENT_TOKEN_TO_BE_REPLACED

A new gaming venue in Jefferson City is hoping to create a safe, comfortable space for all local gamers to enjoy.Mimics JC held a soft opening last weekend at its new spot at 312 Lafayette St. as the … END_OF_DOCUMENT_TOKEN_TO_BE_REPLACED