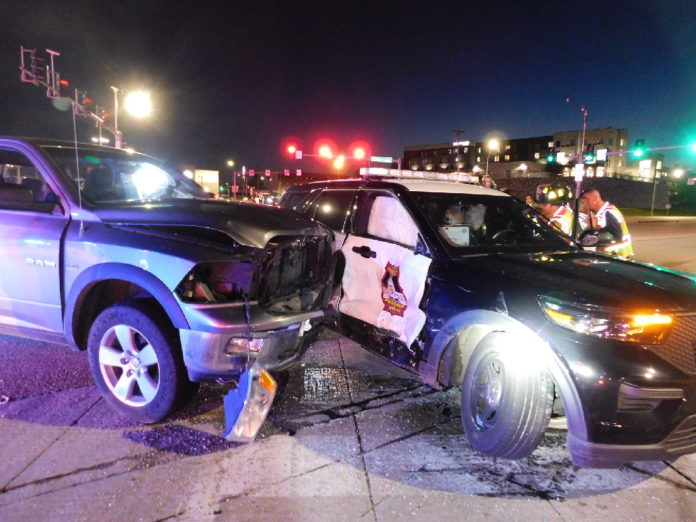 A Jefferson City Police Department officer was injured late Tuesday evening in a collision at U.S. Highway 50 West and Missouri Boulevard.
Paramedics took Officer Daniel Lopez, 36, of Jefferson City, to University Hospital for evaluation. The extent of his injuries was not available.
The driver of the other vehicle, Jeremy Epps, 39, of Linn, was not injured.
A police report stated Epps was southbound in a 2010 Dodge Ram on U.S. Highway 50 West, and approached Missouri Boulevard at 10:42 p.m.
Lopez was northbound on Missouri Boulevard on an emergency call (with lights and siren activated).
Epps told investigators he entered the intersection on a green light, when he heard the siren, and tried to stop. He swerved, but collided with Lopez’s Explorer.

A Jefferson City woman died Saturday after she was thrown out of a boat as it was traveling along the Missouri River.Tanna R. Henson, 48, was pronounced dead at 11:10 p.m. at University Hospital in … END_OF_DOCUMENT_TOKEN_TO_BE_REPLACED

JEFFERSON CITY, Mo. (AP) – Missouri is at risk of losing $4.5 billion in tax revenue and federal funding for Medicaid because of a fight between lawmakers over contraceptives.At issue is a state tax … END_OF_DOCUMENT_TOKEN_TO_BE_REPLACED