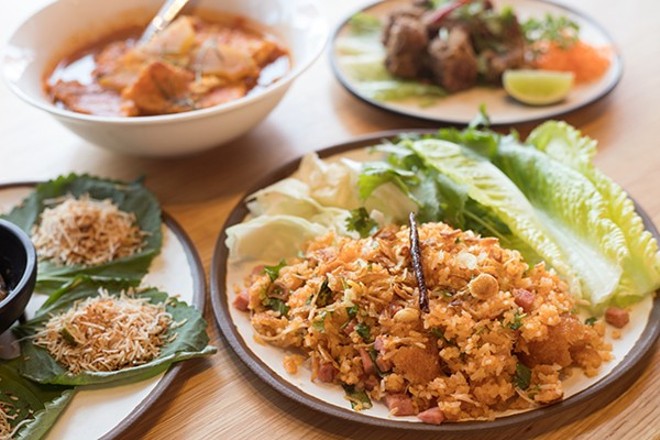 For decades, the Prapaisilp family has been bringing St. Louis diners a taste of Thailand through their restaurant, King & I (3155 South Grand Avenue, 314-771-1777) and, most recently, its sister establishment, Chao Baan (4087 Chouteau Avenue, 314-925-8250). This week, they were honored by the Royal Thai Government for their commitment to authentic Thai Cuisine — a prestigious designation that is only awarded to the top Thai restaurants in the United States.

The awards, known as the “Thai SELECT” Awards for Authenticity in American Thai Cuisine, were handed out to the two restaurants, denoting their authenticity, premium quality, refined decor and excellent service. Chao Baan was given the Thai SELECT Classic designation, while King & I was honored with the Thai SELECT Signature award — the only restaurant in Missouri to receive such a nod.

The Thai SELECT awards are the Royal Thai Government’s official mark of authenticity for American Thai restaurants. To make their selections, a U.S.-based committee repressing the government’s Ministry of Commerce visits restaurants throughout the United States looking for those that stand out for their high quality and attentive service. This is the fifth year that King & I has received the award; for Chao Baan, this is its first time being honored.

“King & I has been a staple Thai restaurant in St. Louis for more than three decades, and we are honored to have received the Thai SELECT award for five years,” says Chief Operating Officer of Global Foods Group and Owner of Chao Baan Shayn Prapaislip in a release announcing the honors. “We opened Chao Baan to bring authentic regional Thai cuisine to St. Louis, and sticking to our roots from the Northeastern and Southern regions of Thailand was considered a bit of a risk as we weren’t certain that Midwesterners would love out-of-the-box dishes. This award solidifies our hard work to offer the most authentic regional cuisine to our friends in the states.”

(The Center Square) – A year after Democrat auditor Nicole Galloway’s audit revealed an employee stole $316,887 from the city of Center in northeast Missouri, a follow-up report found only slight … END_OF_DOCUMENT_TOKEN_TO_BE_REPLACED

JEFFERSON CITY, Mo. – The average number of COVID-19 cases is at a seven-week low. The 7-day rolling average for cases in Missouri sits at 1,387; yesterday, it was 1,435. Exactly one month ago, the … END_OF_DOCUMENT_TOKEN_TO_BE_REPLACED

Chad Niezing of Manchester captured the title Sunday in the Missouri Mid-Amateur Championship at Jefferson City Country Club. Niezing opened with a 67 on Saturday before carding a 70 on Sunday to win … END_OF_DOCUMENT_TOKEN_TO_BE_REPLACED

Terri Blevins, 44, registers for help at an event sponsored by the city of St. Louis with the Metropolitan St. Louis Equal Housing and Opportunity Council to assist people with filing their … END_OF_DOCUMENT_TOKEN_TO_BE_REPLACED