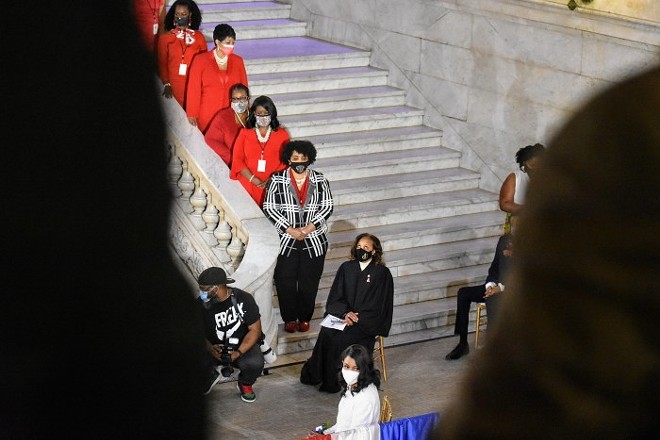 In a hope-filled speech balanced by an acknowledgement of the blockades of the past and the challenges ahead, Tishaura Jones made a grand entrance this afternoon in City Hall as the first Black woman to be sworn in as the mayor of St. Louis.

“I am standing on stone that was not built for me. I am speaking in a rotunda that never envisioned my ascent to mayor. I am going to walk into an office that my ancestors could never have imagined me working in,” Jones said, pausing a beat. “But I’m here.”

During this afternoon’s inauguration, she promised to partner with neighboring governments and lift the voices of those chronically overlooked. The list of speakers included Kansas City Mayor Quinton Lucas as well as St. Louis County Executive Sam Page and East St. Louis Mayor Robert Eastern III.

Eastern said he thought it was the first time the mayor of his city had been invited to speak at the inauguration of a St. Louis mayor, despite their shared history and challenges.

“For too long, these two cities have continued to work in silos,” Eastern said.

Lucas described Jones as a mentor and said he sees her election as a victory for the whole the state.

“We just say ‘the great state of Missouri.’ We just say ‘the great city of St. Louis,’ but the thing that makes us truly great is when these cities start to be cities for everyone inside of those cities — when the city starts to be a place where every child in St. Louis can look up to this amazing woman and say, ‘I can be mayor one day,’” Lucas said.

In her speech, Jones described a broad outline for making the city a safer, more prosperous and equitable place. She lamented a history of neglecting poor neighborhoods in north and south city and suggested major changes to policing St. Louis — a top theme of her campaign. This afternoon, Jones made multiple references to the police department, saying it was “supposedly understaffed but is larger than any other city our size.”

She had previously said social workers and other professionals should be part of the city’s response to emergencies, and she returned to that idea again this afternoon, saying people should be able to call 911 and be connected with the right professional to address whatever situation is at hand.

The historic nature of Jones’ rise to the mayor’s office was a key theme of the ceremony. Visually, it was punctuated by dozens of red-clad supporters, including a row of Jones’ Delta Theta Sigma sorority sisters who lined City Hall’s grand staircase down to the landing where the new mayor was sat near her thirteen-year-old son Aden Jeffries and her father Virvus Jones.

Jones traced a history that included the migration of her grandparents from the Jim Crow south to being raised in the city and bussing as part of a voluntary desegregation program into the Affton School District from north St. Louis. The path led to the state legislator, followed by eight years as the city treasurer and, finally, mayor.

“Most importantly, I’m here today because of you, because you voted, because you got involved, and because you chose to be inspired by a group of people and a vision for St. Louis seeking to move our city and our region forward,” Jones said.

She defeated Alderwoman Cara Spencer in the general election after they advanced from the city’s new approval voting system in the primary.

Jones, who replaces Mayor Lyda Krewson, at what she described as a “pivotal” moment for St. Louis. More than a year into the pandemic, the city is dealing with additional public health and economic catastrophes, even as murders soar to historic levels and the city’s poorest neighborhoods suffer further devastation.

The city will also have a rare opportunity to rebuild with more than $500 million in federal coronavirus aid on the way, giving the new administration resources to make a difference.

In her remarks, Jones built toward a St. Louis version of Martin Luther King Jr.’s famed “I Have a Dream Speech,” describing city where kids are safe, vaccines are distributed quickly, neighborhoods are prosperous and culturally rich, 911 calls bring real help and politics focus on “policy and not personality.”

(The Center Square) – A year after Democrat auditor Nicole Galloway’s audit revealed an employee stole $316,887 from the city of Center in northeast Missouri, a follow-up report found only slight … END_OF_DOCUMENT_TOKEN_TO_BE_REPLACED

JEFFERSON CITY, Mo. – The average number of COVID-19 cases is at a seven-week low. The 7-day rolling average for cases in Missouri sits at 1,387; yesterday, it was 1,435. Exactly one month ago, the … END_OF_DOCUMENT_TOKEN_TO_BE_REPLACED

Chad Niezing of Manchester captured the title Sunday in the Missouri Mid-Amateur Championship at Jefferson City Country Club. Niezing opened with a 67 on Saturday before carding a 70 on Sunday to win … END_OF_DOCUMENT_TOKEN_TO_BE_REPLACED

Terri Blevins, 44, registers for help at an event sponsored by the city of St. Louis with the Metropolitan St. Louis Equal Housing and Opportunity Council to assist people with filing their … END_OF_DOCUMENT_TOKEN_TO_BE_REPLACED