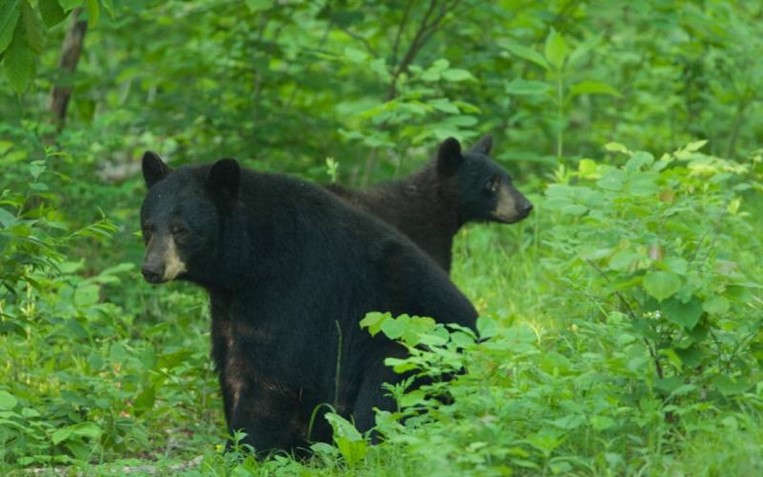 JEFFERSON CITY, Mo. – With spring underway, Missouri’s growing population of about 800 black bears have left their winter dens with some wandering great distances in search of food, territory, and mates. With bears active and on the move, the Missouri Department of Conservation (MDC) reminds people to “Be Bear Aware.”

Missouri is home to only black bears, but the name can be misleading. Black bears sometimes have brown, cinnamon, and red coats. While most Missouri black bears are found in the forested parts of southern Missouri, primarily south of Interstate 44, MDC research shows their numbers are growing and their range is expanding northward. With a growing population of bears and expanding range comes an increased potential for human-bear interactions and conflicts.

“Late spring and early summer are prime times for bears to be on the move,” said MDC Resource Scientist and Furbearer and Black Bear Biologist Laura Conlee. “Bears are hungry and searching for food. Yearling bears are starting to wander from where they were born seeking food and areas to settle. Adult males begin moving large distances in search of females.”

Conlee emphasized that as black bears become active in the spring, they are focused on finding food.

“It is imperative that people remove bear attractants from their property, such as bird feeders, trash, barbeque grills, pet food, and food waste,” she said. “Keeping areas free of attractants and letting bears find natural foods is in everyone’s best interest. If you see a bear, let the animal be and enjoy the sighting, but be sure to not offer it any food.”

Conlee noted that intentionally feeding bears can be dangerous as it makes the bears comfortable around people. It can also lead bears to cause significant damage to property while searching for a meal.

“When bears lose their fear of humans, they could approach people in search of food or may defend the food sources or territory they associate with people, which can make them dangerous,” Conlee said. “When this happens, the bear cannot be relocated and has to be destroyed. A fed bear is a dead bear.”

Food is usually a bear’s main motivator, but that also means it can be a main source of conflict. MDC offers the following tips to avoid attracting black bears to possible human-created food sources:

While black bears are generally a shy, non-aggressive species and bear attacks are rare throughout their range in North America, MDC offers these tips to stay safe when outdoors in bear country:

For more information on Missouri black bears and how to Be Bear Aware, visit mdc.mo.gov/bearaware.

MDC is offering eligible Missourians the state’s first bear hunting season starting this fall with applications being taken during May. Learn more about bear hunting in Missouri at mdc.mo.gov/bearhunting or view and download MDC’s new online Black Bear Hunting Digest at huntfish.mdc.mo.gov/hunting-trapping/regulations/black-bear-hunting-digest.

Black bears were historically abundant throughout the forested areas of Missouri prior to European settlement but were nearly eliminated by unregulated killing in the late 1800s, as well as from habitat loss when Ozark forests were logged. Over the last 50 years, bear numbers and range in Missouri have grown to around 800 black bears with most found south of the Missouri River and primarily south of Interstate 44. Missouri bear range is expanding. Bear numbers in Missouri are increasing each year by approximately 9% and are expected to double in less than 10 years. As bear numbers continue to increase, MDC will use a highly regulated hunting season as an essential part of population management. MDC’s 2020-2030 Black Bear Management Plan will guide bear management in Missouri for the next decade. Learn more about black bears in Missouri and MDC management efforts at mdc.mo.gov/bears.

In addition to directly educating Missourians on how to Be Bear Aware about black bears in the state, MDC is also affiliated with the BearWise® program. BearWise is a multi-state education effort developed by black bear biologists and supported by state wildlife agencies, such as MDC, that provides sound information and smart solutions that help people, neighborhoods, and communities prevent problems with black bears and keep bears wild. BearWise shares ways to prevent conflicts, provides resources to resolve problems, and encourages community initiatives to keep bears wild. Learn more at BearWise.org.

In an effort to better represent the needs and interests of all area residents, a member of Representative Vicky Hartzler’s staff, Lauren Mann, will be available at the St. Clair County Courthouse to … END_OF_DOCUMENT_TOKEN_TO_BE_REPLACED

Demand for e-commerce options in retail was already growing before the pandemic, but growth in the sector accelerated during COVID-19, pushing retailers to embrace new shopping methods to reach … END_OF_DOCUMENT_TOKEN_TO_BE_REPLACED

There is no doubt that business ownership can be a messy experience full of hurdles to overcome on a daily, weekly and yearly basis. But do you find yourself running into the same hurdles over and … END_OF_DOCUMENT_TOKEN_TO_BE_REPLACED