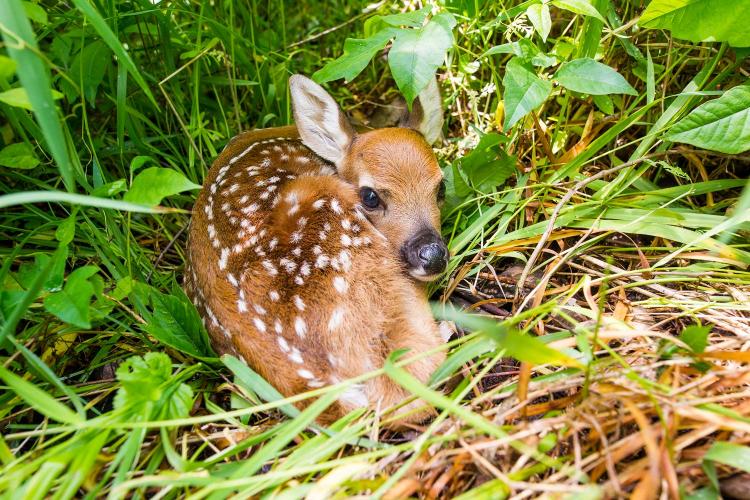 JEFFERSON CITY, Mo. – As you head outdoors this season to enjoy the sunshine and warmer weather, you may encounter a variety of newborn animals. Young wildlife can pull on our heartstrings as they appear to be abandoned, but that’s usually not the case. The Missouri Department of Conservation (MDC) reminds the public that interfering with wildlife can do more harm than good.

“Young animals are rarely orphaned,” explained MDC State Wildlife Veterinarian Sherri Russell. “If the young is left alone, the parent will usually return. Parents are normally out searching for food and cannot constantly attend to their offspring.”

Baby birds are a common newborn people can come across in the spring.

“If you see a chick with feathers hopping on the ground, leave it alone and bring pets inside because it’s a fledgling and the parents are nearby keeping watch,” Russell said. “Fledglings can spend up to 10 days hopping on the ground learning to fly. If you find one that has no feathers, you can return it to the nesting area if possible, as it most likely fell out of the nest.”

Other common issues include dogs catching young rabbits and lawn mowers running over their nests.

“Rabbits seldom survive in captivity and can actually die of fright from being handled,” said Russell. “Even if the animal is injured, it’s best to return it to the nest because the mother will most likely return.”

Russell also noted that human scent does not cause wild mothers to reject their young, and most newborn animals do not survive in captivity.

“People have good intentions, but the care and rehabilitation of wild animals require special training, facilities, and permits,” stressed Russell. “Without such care and knowledge, wild animals will remain in poor health and could eventually die. Not to mention, it’s illegal to possess many wild animals without a valid state or federal permit.”

Russell also said wildlife can become dangerous as they mature, and can carry parasites, disease, and cause property damage.

“Native wildlife can carry mites, ticks, lice, fleas, flukes, roundworms, rabies, distemper, tuberculosis, respiratory diseases, and skin diseases, some of which can be transmitted to humans,” she explained.

Although tempting to take them into our homes, the best you can do for wild animals is leave them be.

(The Center Square) – A year after Democrat auditor Nicole Galloway’s audit revealed an employee stole $316,887 from the city of Center in northeast Missouri, a follow-up report found only slight … END_OF_DOCUMENT_TOKEN_TO_BE_REPLACED

JEFFERSON CITY, Mo. – The average number of COVID-19 cases is at a seven-week low. The 7-day rolling average for cases in Missouri sits at 1,387; yesterday, it was 1,435. Exactly one month ago, the … END_OF_DOCUMENT_TOKEN_TO_BE_REPLACED

Chad Niezing of Manchester captured the title Sunday in the Missouri Mid-Amateur Championship at Jefferson City Country Club. Niezing opened with a 67 on Saturday before carding a 70 on Sunday to win … END_OF_DOCUMENT_TOKEN_TO_BE_REPLACED

Terri Blevins, 44, registers for help at an event sponsored by the city of St. Louis with the Metropolitan St. Louis Equal Housing and Opportunity Council to assist people with filing their … END_OF_DOCUMENT_TOKEN_TO_BE_REPLACED