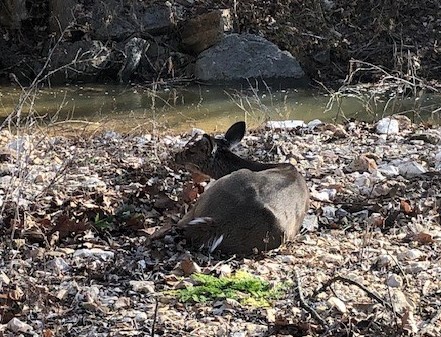 JEFFERSON CITY, Mo. – The Missouri Department of Conservation (MDC) reports it has completed its monitoring, management, and testing efforts for its 2020-2021 chronic wasting disease (CWD) surveillance year. From those efforts, MDC reports it collected more than 15,300 tissue samples from mostly hunter-harvested deer for CWD testing. MDC has confirmed 44 new cases of CWD from the deer tested.

The new findings bring the total number of CWD cases in the state to 206. MDC has tested more than 152,300 deer since the first cases of CWD were found in free-ranging deer in Missouri in 2012.

Of the 44 new cases, two were found in Putnam County and one in Pulaski County, both of which had no previously known cases of CWD.

One confirmed case came from a deer in Ste. Genevieve County that was found exhibiting signs of CWD infection. The sick deer was observed by several people, and MDC was notified. The sick deer was humanely shot by MDC staff and a tissue sample was submitted for CWD testing. MDC staff properly disposed of the carcass.

It typically takes an average 18-24 months from the time a deer is infected with CWD until it looks visibly sick. Deer can spread CWD long before they look or act sick. In Missouri, most deer that test CWD-positive do not show signs of the disease. Deer showing signs of CWD may present a variety of symptoms, including dramatic weight loss, abnormal behavior, and excessive thirst, drooling, or urination.

MDC Wildlife Health Program Supervisor Jasmine Batten noted that the 15,300 deer tested during the past season decreased significantly from the year before due to the effects of COVID-19 on MDC’s surveillance efforts.

“We tested about 16,000 fewer deer last season compared to the 2019-2020 testing period,” Batten said. “The lower number of deer tested this season was mostly due to MDC suspending our mandatory sampling requirements during the opening weekend due to concerns about human health and safety related to the COVDID-19 pandemic. Thankfully, the hard work of taxidermists and meat processors who provided samples and the hunters who voluntarily had their deer sampled at a variety of locations allowed us to still adequately monitor and detect CWD throughout the state.”

MDC thanks the thousands of hunters who brought their harvested deer to MDC locations for CWD sampling and testing. MDC also thanks the more than 150 partnering taxidermists and meat processors throughout the state who sampled over 9,300 hunter-harvested deer this year for CWD testing.

MDC also thanks the more than 1,500 landowners in areas where CWD has been found who voluntarily signed up to participate in MDC’s post-deer season CWD management efforts. Cooperatively, landowners and MDC staff in these areas harvested an additional 2,713 deer after the close of the deer season, removing an additional 18 CWD-positive deer.

According to MDC, post-deer season targeted culling efforts can help decrease CWD transmission by reducing the number of potentially infected deer within areas where the disease has been detected. Long-term, sustained, targeted culling has been shown to slow the spread of CWD, and MDC is committed to using this management tool to protect the state’s deer herd from the effects of CWD.

CWD is a deadly disease in white-tailed deer and other members of the deer family. The purpose of MDC’s CWD sampling efforts is to find cases as early as possible so the Department can limit the spread of the disease by implementing management actions such as targeted culling. For more information on MDC’s 2020-2021 CWD surveillance results, visit mdc.mo.gov/cwd under CWD Surveillance.

(The Center Square) – A year after Democrat auditor Nicole Galloway’s audit revealed an employee stole $316,887 from the city of Center in northeast Missouri, a follow-up report found only slight … END_OF_DOCUMENT_TOKEN_TO_BE_REPLACED

JEFFERSON CITY, Mo. – The average number of COVID-19 cases is at a seven-week low. The 7-day rolling average for cases in Missouri sits at 1,387; yesterday, it was 1,435. Exactly one month ago, the … END_OF_DOCUMENT_TOKEN_TO_BE_REPLACED

Chad Niezing of Manchester captured the title Sunday in the Missouri Mid-Amateur Championship at Jefferson City Country Club. Niezing opened with a 67 on Saturday before carding a 70 on Sunday to win … END_OF_DOCUMENT_TOKEN_TO_BE_REPLACED

Terri Blevins, 44, registers for help at an event sponsored by the city of St. Louis with the Metropolitan St. Louis Equal Housing and Opportunity Council to assist people with filing their … END_OF_DOCUMENT_TOKEN_TO_BE_REPLACED