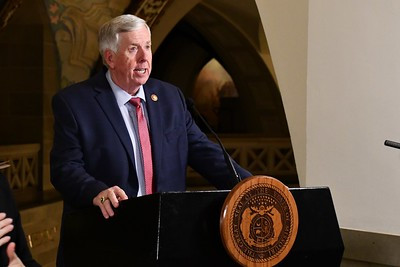 Gov. Parson said this comes as the state works to transition more mass vaccination events to the larger metro areas.

He said by April 1, the St. Louis area will have triple the number of mass vaccination events as it did at the beginning of the vaccination process. Gov. Parson said an increase of these kinds of events coincide with the increase of vaccine being delivered and was always part of the state’s vaccination plan

“There is a clear light at the end of the tunnel for Missouri,” said Gov. Parson during an afternoon briefing.

On March 15, Missourians that fall under Phase 1B-Tier 3 of the state’s vaccination plan can begin getting the shot. Gov. Parson said 45 days after that Phase 2 will be eligible. He said that could happen even sooner depending on how much vaccine is available.

Missouri is reporting 482,224 confirmed COVID cases and 8,300 deaths. The state is also reporting 1,841,484 Missourians have received their first and second doses of the vaccine.

In the St. Louis area, hospitals that make up the St. Louis Metropolitan Pandemic Task Force report the number of patients in their facilities have reached the lowest point since July Fourth with 250 people in the hospital with COVID. That number was nearly 1,100 on December 1.

O’FALLON, Mo. (AP) — Missouri Gov. Mike Parson announced Tuesday that he made good on his promise to pardon a couple who gained notoriety for pointing guns at social justice demonstrators as they … END_OF_DOCUMENT_TOKEN_TO_BE_REPLACED

Writing in a 16-page decision, Karen Boeger, who oversees contracts and purchasing for the Office of Administration, said Corizon had no basis for that accusation. Support … END_OF_DOCUMENT_TOKEN_TO_BE_REPLACED

(Licking, MO) -- A Missouri prisoner who walked away from a June work release assignment at the state fairgrounds in Sedalia has been transferred to a maximum-security prison in Licking. The state … END_OF_DOCUMENT_TOKEN_TO_BE_REPLACED