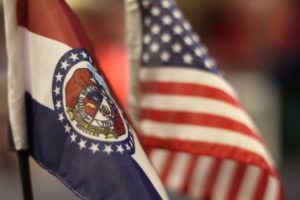 JEFFERSON CITY, Mo. — More than $14 billion in military defense contracts were awarded to companies in Missouri during the 2019 fiscal year, according to a new report released by Gov. Mike Parson.
The analysis detailed the values of contracts awarded to Missouri companies by the U.S. Department of Defense (DOD) and related agencies, outlining contracts enacted between the 2017 and 2019 fiscal years. According to its findings, defense contracts accounted for more than 83,100 jobs over the reporting period.
“We are proud to have dedicated defense companies and employees statewide who work every day to protect our nation,” Parson said. “Military investment in Missouri not only strengthens our economy but the defense of the entire country.”
Boeing Defense and its supply chain were the most prominent beneficiaries, earning more than 70 percent of the state’s annual contract awards on average; manufacturing firms received 79 percent of all annual awards statewide. According to the version released last year, defense spending supports more than 180,000 direct and indirect jobs in the state with more than $29 billion in total economic impact.
The report was commissioned by the Missouri Military Preparedness and Enhancement Commission (MMPEC) and its Office of the Military Advocate to better understand the local economic impact of defense contract spending. According to Department of Economic Development Director Rob Dixon, the findings outlined the benefits to businesses, communities, and the state as a whole.
“The importance of Missouri’s military installations to our economy is undeniable,” Dixon said. “Defense investment in our state impacts more than 25,000 businesses and supports the livelihoods of countless Missourians working in industries such as manufacturing and technology.”
The report drew the attention of Missouri legislators as well. Sen. Sandy Crawford said she hoped to support further economic growth in the future while Rep. Dave Griffith said he was “very proud of the confidence shown in our Missouri military installations and supporting business partners.”
Cameron Gerber studied journalism at Lincoln University. Prior to Lincoln, he earned an associate’s degree from State Fair Community College. Cameron is a native of Eldon, Missouri.
Contact Cameron at cameron@themissouritimes.com.

A Jefferson City woman died Saturday after she was thrown out of a boat as it was traveling along the Missouri River.Tanna R. Henson, 48, was pronounced dead at 11:10 p.m. at University Hospital in … END_OF_DOCUMENT_TOKEN_TO_BE_REPLACED

JEFFERSON CITY, Mo. (AP) – Missouri is at risk of losing $4.5 billion in tax revenue and federal funding for Medicaid because of a fight between lawmakers over contraceptives.At issue is a state tax … END_OF_DOCUMENT_TOKEN_TO_BE_REPLACED