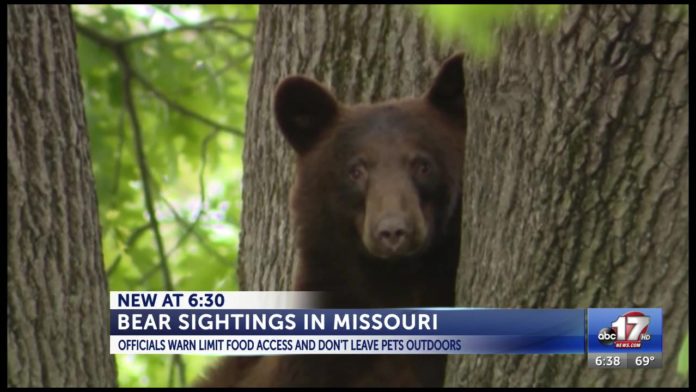 The Missouri Department of Conservation says the state is seeing an increase in its bear population. Officials report the population is around 800 with most Missouri black bears are found in the forested parts of southern Missouri, primarily south of Interstate 44.

Bears are also expanding their territory in the state, and even residents living as far north as the Lake of the Ozarks should start taking precautions for the large predatory mammals.

Laura Conlee of the conservation department says that this time of year bear activity increases, with males starting to wander and yearlings dispersing.

She says there are some of the measures that can be taken.

“If you live in these areas where bear numbers are increasing or even it’s an area where you have a sighting that crops up. Making sure you are not providing food to that bear. So ensuring that you bring bird feeders in, you don’t leave pet food outside, any trash that is outside is in secure containers and things like that. So the big is just making sure you’re not giving that bear easy access to food.”

Food is usually a bear’s main motivator, but that also means it can be a main source of conflict.

A Jefferson City woman died Saturday after she was thrown out of a boat as it was traveling along the Missouri River.Tanna R. Henson, 48, was pronounced dead at 11:10 p.m. at University Hospital in … END_OF_DOCUMENT_TOKEN_TO_BE_REPLACED

JEFFERSON CITY, Mo. (AP) – Missouri is at risk of losing $4.5 billion in tax revenue and federal funding for Medicaid because of a fight between lawmakers over contraceptives.At issue is a state tax … END_OF_DOCUMENT_TOKEN_TO_BE_REPLACED