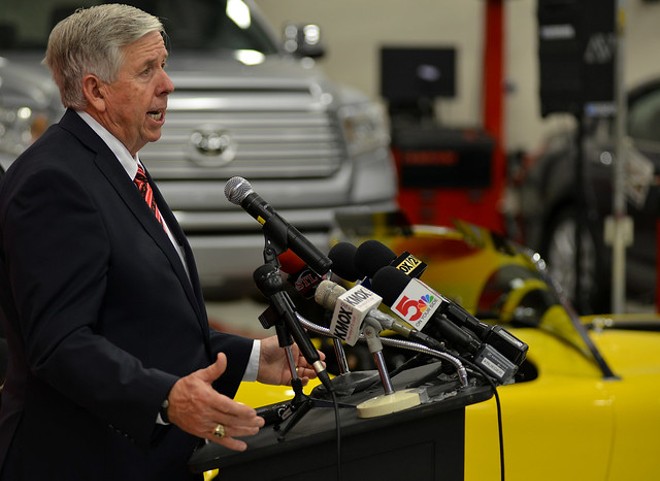 The least surprising lawsuit of the year, to force Missouri to provide Medicaid coverage to 275,000 people eligible under a 2020 initiative petition, was filed Thursday in Cole County.

Filed on behalf of three people who would be eligible for Medicaid coverage on July 1, the lawsuit seeks an order for the Department of Social Services to allow them to enroll and receive the same coverage as current program clients.

“The agencies claim that they lack the authority to implement Medicaid expansion because the General Assembly did not include a specific appropriations line item funding services for the newly eligible population,” the lawsuit states. “This position has no merit.”

The lawsuit is the expected response to Gov. Mike Parson’s May 13 announcement that he had withdrawn Missouri’s Medicaid plan because lawmakers did not include the $1.9 billion estimated cost in the state budget.

The lawsuit argues there is no legal reason to treat people who become eligible July 1 differently from those who are currently eligible.

The legislature has appropriated money for every service provided by Medicaid, the lawsuit notes, and whether current appropriations are sufficient for everyone is yet to be seen.

The trio of plaintiffs in the lawsuit includes Stephanie Doyle, a single mother of three working full-time for $12 an hour who suffers from severe eczema; Autumn Stultz, a single mother of one who works part time for minimum wage who has chronic asthma and tonsil stones and a history of strokes, high blood pressure, heart attacks and thyroid conditions in her family; and Melinda Hille, who has Type 1 diabetes, thyroid disease, pernicious anemia and a precancerous growth on her colon.

The legal team for the lawsuit brings together two attorneys who in the past have found themselves at odds over state policy – Chuck Hatfield, former chief of staff to Democratic Attorney General Jay Nixon, and Lowell Pearson, former general counsel to Republican Gov. Matt Blunt.

The arguments raised by the lawsuit are identical to those identified by attorney Jim Layton in an interview this week with The Independent. Layton, who was the top civil appellate attorney for the Attorney General’s Office for most of his 22 years in state government, said the issue would be decided in state courts and would likely be filed on behalf of people who would be eligible on July 1.

Layton, who is not part of the legal team, said he expected the lawsuit to seek an order to compel the state to accept applications for coverage and reimburse hospitals, physicians and other providers for medical services.

In that way, he said, the lawsuit makes no demand for a specific appropriation for the expansion population.

“If you have a court decision that leads to coverage as the constitution provides and so you run out of money, you would run out of money for everybody, not just the expanded population,” he said.

The basics of the new eligibility would be coverage for working-age adults who earn up to 138 percent of the federal poverty guideline, or $17,774 a year for a single person. That is equal to working about 33 hours a week at the state minimum wage of $10.30 per hour. For a household of four, the limit is $36,570, the income of one person working full at $17.58 an hour or two people working a combined 68 hours a week at minimum wage.

Under the current Medicaid program, adults without children are not eligible unless they are blind, have another qualifying disability or are pregnant.

Before passage of the initiative known as Amendment 2, Missouri was one of 14 states that had not yet expanded Medicaid under the 2010 Affordable Care Act. The law originally made expansion mandatory but the U.S. Supreme Court ruled in 2012 that penalty provisions that made Medicaid an all-or-nothing program were unenforceable.

In his January budget proposal, Parson estimated the total cost of expansion at $1.9 billion, with $130 million from general revenue, $1.65 billion from the federal treasury and the remainder from taxes on medical providers.

Layton said he expects the state’s legal arguments in response to the suit to echo those made by opponents during legislative debate.

Foes argued that the cost was more than the state could bear long-term. It is more important to reform the program expected to cost more than $12 billion in the coming fiscal year without the expansion population, they said.

“If we expand Medicaid without doing that we are simply pouring gasoline on the fire of problems that could come along due to increased spending,” House Budget Committee Chairman Cody Smith, R-Carthage, said during a committee debate in March.

Opponents also argued that the budget did not have to fund people eligible under Amendment 2 because the initiative petition did not include revenue to pay the cost.

There is a provision in the Missouri Constitution stating that initiatives “shall not be used for the appropriation of money.”

“If we want initiatives with appropriations, we need to be honest with the people and say where the money is coming from,” said Rep. David Evans, R-West Plains, said during debate in the House Budget Committee.

By refusing expansion, Missouri is giving up a chance to receive about $1.2 billion in federal support for the traditional Medicaid program. The American Rescue Plan passed in March increases the federal share of the traditional program by 5 percent for states that expand Medicaid in the next two years.

A Jefferson City woman died Saturday after she was thrown out of a boat as it was traveling along the Missouri River.Tanna R. Henson, 48, was pronounced dead at 11:10 p.m. at University Hospital in … END_OF_DOCUMENT_TOKEN_TO_BE_REPLACED

JEFFERSON CITY, Mo. (AP) – Missouri is at risk of losing $4.5 billion in tax revenue and federal funding for Medicaid because of a fight between lawmakers over contraceptives.At issue is a state tax … END_OF_DOCUMENT_TOKEN_TO_BE_REPLACED