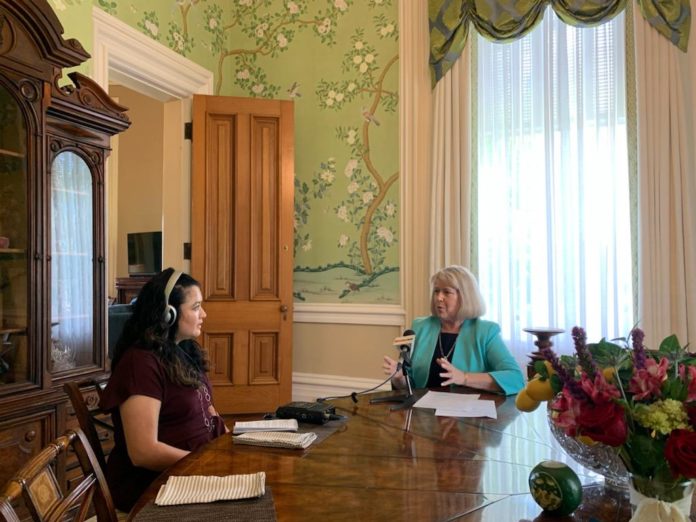 On August 10, Missouri turns the ripe age of 200 years old. Missouri is gearing up to celebrate the big day.
During an interview at the Governor’s Mansion in Jefferson City, First Lady Teresa Parson tells Missourinet events across the state will showcase Missouri’s rich history.
Missouri First Lady Teresa Parson talks to Missourinet’s Alisa Nelson at the Governor’s Mansion in Jefferson City“Since I’ve been in the house here, I’ve become more interested in our history of our state and of course of anything in our mansion here. So, I hope everyone will search out and learn something new about our state during this bicentennial year,” says Mrs. Parson.
She says she is looking forward to joining other Missourians and celebrating the bicentennial together.
“I think just being together and participating in different events with different Missourians across the state, it’s going to be an exciting, fun year for all of us if we join in and take part. I would encourage all Missourians to do that for sure,” the first lady says.
Due to the pandemic, a parade and ball to celebrate the governor’s inauguration were postponed in January. They will instead be held on September 18 in Jefferson City – with a bicentennial theme.
“It will be a little different, which I think it should be because of the bicentennial. It will be a special event. It will be an outdoor event on the north side of the Capitol the evening of September 18. We will actually walk down the steps there off of the river side,” she says.
The Missouri Star Quilt Company, based in northwest Missouri’s Hamilton, has put together the Bicentennial quilt (photo courtesy of Missouri Bicentennial website)The first lady and GOP ally James Harris are serving as co-chairs of the Governor’s Bicentennial Inaugural Committee. She wouldn’t spill all the beans about the events that weekend because she says people need to stay tuned.
“There’s some other special things that will be happening over that weekend. I believe there will be a gigantic fireworks display over the river that evening,” she says. “We’re doing it on a weekend, which typically the inaugural ball is done on a Monday evening. So, we’re hoping to make it more of a family celebration because those young people are the ones that will be here much longer. If they can remember the bicentennial and being here in Jefferson City, I think that’s special.”
For people of all ages – live music and dancing will be involved that evening.
Other bicentennial events throughout the rest of the year include:
*A 200-mile bike ride
*A carnival
*The state fair will have a bicentennial theme
*A quilt festival
*A haunted history walk
*An art show
*Route 66 Festivals
*A wine festival
*History tours
*A reenactment of the first Missouri train robbery
*A time capsule
*Parades
More information about the events is on missouri2021.org.
Copyright © 2021 · Missourinet

KANSAS CITY, MO (KCTV5) — The investigation into the police shooting of Malcolm Johnson has cleared another step. The case file for the Missouri Highway Patrol is now in Jefferson City, according … END_OF_DOCUMENT_TOKEN_TO_BE_REPLACED

Progress is slow on redeveloping the area around Capitol Avenue, but the revitalization of the Capital City’s historic corridor is starting to show the results of some much needed love.The East … END_OF_DOCUMENT_TOKEN_TO_BE_REPLACED

A new gaming venue in Jefferson City is hoping to create a safe, comfortable space for all local gamers to enjoy.Mimics JC held a soft opening last weekend at its new spot at 312 Lafayette St. as the … END_OF_DOCUMENT_TOKEN_TO_BE_REPLACED