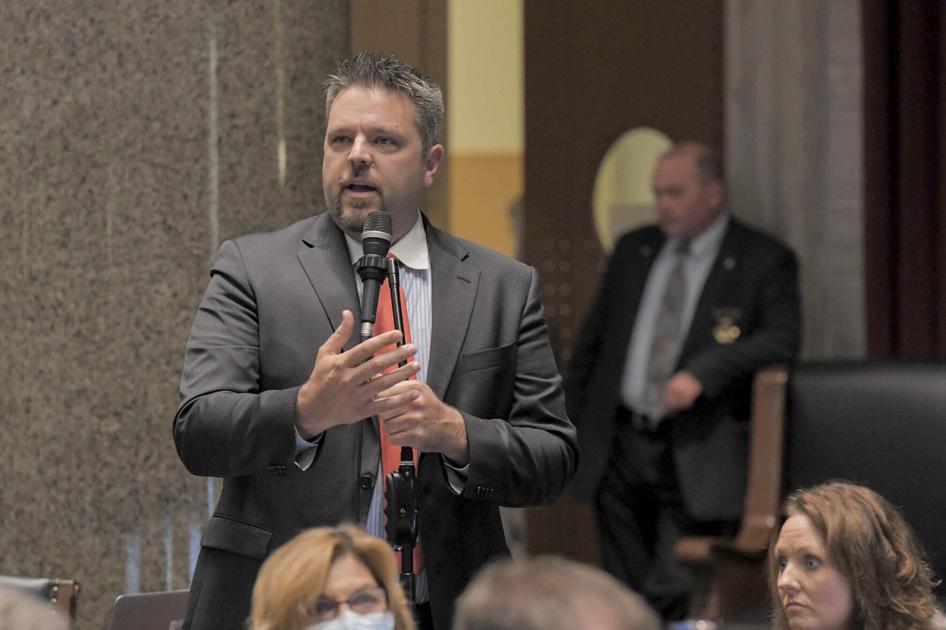 (The Center Square) – The Missouri House on Tuesday adopted a wide-ranging, heavily amended Senate bill that would make it a crime to block traffic during unlawful assemblies, increase penalties for vandalizing property, prevent local governments from defunding police, create a Police Bill of Rights and ban the use of choke-holds by law enforcement.

Senate Bill 26, filed by Sen. Bill Eigel, R-Weldon Spring, was passed in the Senate in a 24-9 vote on Feb. 25 but the version of the bill adopted by the House Tuesday in a 98-50 tally substitutes much of the original SB 26 for House Bill 698, sponsored by Rep. Nick Schroer, R-O’Fallon.

SB 26 now goes back to the Senate where the dramatically expanded measure faces an uncertain fate with the session nearing its May 14 adjournment.

The bill was modified with 40 amendments during its six-hour Tuesday House floor debate, including the police choke-hold ban, a provision allowing gun owners to attend church armed, raising the age to try 17-year-olds as juveniles, requiring officers take a use-of-force training and regulating unlicensed boarding schools.

The amendment banning police chokeholds was filed by Rep. Shamed Dogan, R-Ballwin, the lone Black member of the Statehouse GOP caucus. Its inclusion was approved in a 111-34 vote but did not convince Democrats to support SB 26.

Under another adopted amendment filed by Rep. Ben Baker, R-Neosho, gun owners would be allowed to carry loaded firearms into churches regardless of whether a pastor or congregation approves.

Among failed amendments was a measure filed by Rep. Bennie Cook, R-Neosho, that would have prohibited probation for anyone convicted of attacking a law enforcement officer, which lawmakers balked at without further study.

Under SB 26, cities that cut police budgets by more than 12% would be sanctioned, penalties for vandalizing monuments enhanced and new crimes created in state statute for protesters to intentionally block traffic.

The first offense would be an infraction but rise to a felony on the third, with the charges enhanced when traffic was blocked during an “unlawful assembly.”

Democrats criticized the provisions as attacks on the First Amendment right to free speech and specifically geared to target minorities and demonstrations by Black Lives Matter.

Schroer said the bill is not meant to stop protests but to stop protesters from shutting down streets and highways, like they did in June in St. Louis and St. Charles when demonstrators blocked Interstate 70.

“Is it going to stop everyone?” Schroer said. “No, no law that we have today is going to stop people outright, but this is going to deter or hopefully deter people from jumping in traffic without getting a permit first when it comes to our highways and interstates.”

Republicans said the measure is supported by the majority of Missourians.

“We didn’t run on defunding the police. We ran on supporting the police,” said Rep. Justin Hill, R-Lake Saint Louis. “This is why Republicans have a majority in Missouri.”

In an effort to better represent the needs and interests of all area residents, a member of Representative Vicky Hartzler’s staff, Lauren Mann, will be available at the St. Clair County Courthouse to … END_OF_DOCUMENT_TOKEN_TO_BE_REPLACED

Demand for e-commerce options in retail was already growing before the pandemic, but growth in the sector accelerated during COVID-19, pushing retailers to embrace new shopping methods to reach … END_OF_DOCUMENT_TOKEN_TO_BE_REPLACED

There is no doubt that business ownership can be a messy experience full of hurdles to overcome on a daily, weekly and yearly basis. But do you find yourself running into the same hurdles over and … END_OF_DOCUMENT_TOKEN_TO_BE_REPLACED