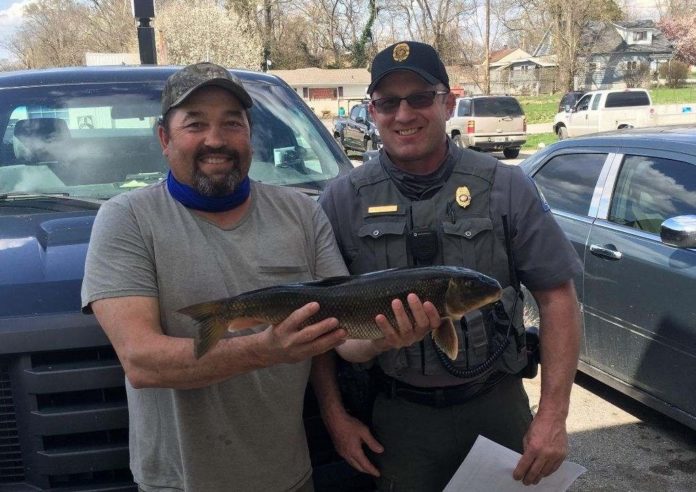 JEFFERSON CITY, Mo. – The Missouri Department of Conservation (MDC) congratulates Harvey Smith of Sparta for snagging a new state-record white sucker. Smith was fishing March 27 when he snagged the 6-pound, 2-ounce fish from Roark Creek in Taney County. The previous record under alternative methods was a 5-pound, 1-ounce fish caught from Lake Taneycomo.

“It’s kind of funny, because this was the first time I’d been snagging in 30 years,” laughed Smith. “My son and his best friend convinced me to go out with them and I ended up catching a state record. I’ll probably never do it again!”

Suckers are one of the dominant group of large fishes in Missouri waters. They feed mostly by sucking up material from the bottom. White suckers are found nearly statewide, but are absent from the Bootheel lowlands and southeastern Ozarks.

MDC staff verified the fish’s weight using a certified scale in Sparta. This is the third state-record fish caught in 2021.

“I was actually going to turn the fish loose,” Smith said. “I didn’t think anything of it, but everybody stopped me saying that it was a huge fish. I guess I plan to get it mounted!”

(The Center Square) – A year after Democrat auditor Nicole Galloway’s audit revealed an employee stole $316,887 from the city of Center in northeast Missouri, a follow-up report found only slight … END_OF_DOCUMENT_TOKEN_TO_BE_REPLACED

JEFFERSON CITY, Mo. – The average number of COVID-19 cases is at a seven-week low. The 7-day rolling average for cases in Missouri sits at 1,387; yesterday, it was 1,435. Exactly one month ago, the … END_OF_DOCUMENT_TOKEN_TO_BE_REPLACED

Chad Niezing of Manchester captured the title Sunday in the Missouri Mid-Amateur Championship at Jefferson City Country Club. Niezing opened with a 67 on Saturday before carding a 70 on Sunday to win … END_OF_DOCUMENT_TOKEN_TO_BE_REPLACED

Terri Blevins, 44, registers for help at an event sponsored by the city of St. Louis with the Metropolitan St. Louis Equal Housing and Opportunity Council to assist people with filing their … END_OF_DOCUMENT_TOKEN_TO_BE_REPLACED