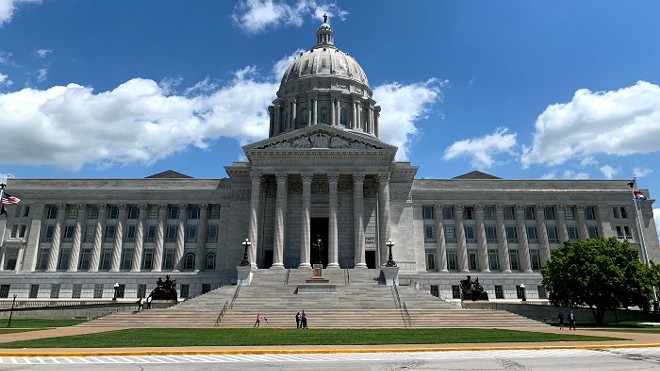 Republican state legislators today refused to fund voter-approved Medicaid expansion in the state budget sent to the governor, but that battle is far from over.

Those lawmakers in favor of expansion say the state is obligated to accept the will of voters who in August approved a constitutional amendment to extend the health-care benefits to Missourians making less than $18,000 per year.

Even before Republicans officially rejected funding expansion through the budget, Democrats promised to go forward.

“We will fight,” Sen. Brian Williams, D-St. Louis County, who joined Black pastors from across the state on Thursday for a press conference in front of the Missouri Supreme Court. “We will continue to push until we get this in front of a judge.”

Missouri is one of just fourteen states that haven’t moved forward with expansion, and the only state besides Oklahoma where expansion has been approved but not implemented. The expansion would broaden Medicaid coverage to another 275,000 Missourians.

Williams and other Democrats have urged Missourians to sign up for coverage when they become eligible on July 1 under the constitutional amendment passed by voters.

Republicans who fought expansion have claimed Missourians were tricked into voting for it, and that GOP lawmakers know what’s best for them.

“I am proud to stand against the will of the people who were lied to, ’cause that’s our job,” Rep. Justin Hill, R-Lake St. Louis, said last month during a floor debate.

Caucus leaders speaking on the Republican decision to refuse to #FullyFundMedicad.

“I’m sad for the people of Missouri… The GOP legislature basically gave them the middle finger today.” @PeterforMO #moleg pic.twitter.com/D8FWbkxS7S

Rep. Peter Merideth of St. Louis is the ranking Democrat on the House Budget Committee and has fought heated battles through the session to expand Medicaid, pointing out that the state would be leaving billions of dollars on the table by spurning the federal match. After today’s vote, said in a public statement that Republicans had dismissed the will of voters — “The GOP legislature basically gave them the middle finger today.”

Gov. Mike Parson will still have to approve the budget, and he has not yet announced a decision.

“We will assess our options and legal requirements on how to move forward with Medicaid expansion, once the budget is finalized,” he said in an April 29 tweet.

House Minority Leader Crystal Quade, D-Springfield, appealed to the governor to side with voters.

“As a former sheriff, the governor built a solid reputation for respecting and upholding the law,” Quade said in a written statement. “We don’t believe he will sully that reputation by playing political games with the lives of 275,000 of his fellow Missourians and refusing to fulfill his constitutional duty. Despite his previous opposition, the governor consistently has promised to carry out the will of voters on Medicaid expansion, and he has given us no reason to expect he will fail to honor his word.”

In an effort to better represent the needs and interests of all area residents, a member of Representative Vicky Hartzler’s staff, Lauren Mann, will be available at the St. Clair County Courthouse to … END_OF_DOCUMENT_TOKEN_TO_BE_REPLACED

Demand for e-commerce options in retail was already growing before the pandemic, but growth in the sector accelerated during COVID-19, pushing retailers to embrace new shopping methods to reach … END_OF_DOCUMENT_TOKEN_TO_BE_REPLACED

There is no doubt that business ownership can be a messy experience full of hurdles to overcome on a daily, weekly and yearly basis. But do you find yourself running into the same hurdles over and … END_OF_DOCUMENT_TOKEN_TO_BE_REPLACED