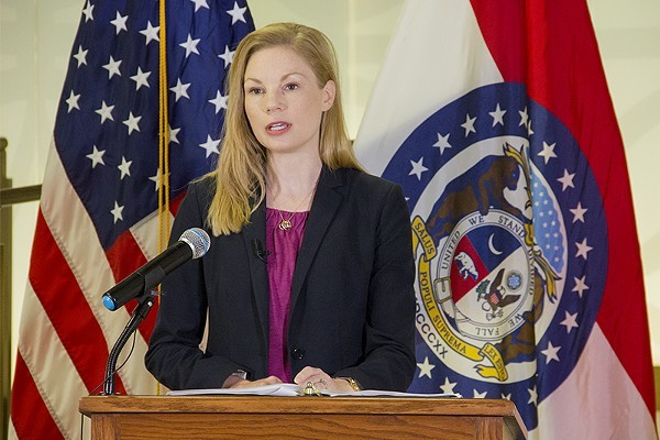 Nicole Galloway, the only Democrat who currently holds a statewide office in Missouri, announced Friday she won’t seek re-election in 2022.

In an announcement posted on Twitter, Galloway called serving as auditor “the honor of my life.” She pointed to her husband and three sons, noting that in her decade in public office she has “missed countless family events, little league games and school activities.

“I am ready for the next chapter of service and life with my family.”

Galloway is a Columbia CPA who was appointed auditor by Gov. Jay Nixon in 2015 after the death of Republican Tom Schweich. She won a full term in office in 2018, even as Democratic U.S. Sen. Claire McCaskill lost to Republican Josh Hawley.

As the state’s most prominent Democrat, she was widely considered the party’s strongest candidate for governor in 2020. And she ultimately decided to throw her hat in the ring, running against Gov. Mike Parson last year in a bruising race that saw her lose by 17 percentage points.

Her decision to bow out of the 2022 race leaves Democrats without a clear candidate for the office in a state where Republicans have increasingly dominated elections for the last two decades.

Several Democrats are running or considering a run for the U.S. Senate next year, and another open statewide office could shake things up in that primary as well.

But the party’s bench has been thoroughly depleted by years of electoral defeats. Galloway said in her announcement Friday that not only will she not be running for re-election, but she won’t be a candidate for any office in 2022.

No Republicans have formally entered the campaign for auditor, but state Treasurer Scott Fitzpatrick, who was appointed to his job in 2018 and elected to a four-year term last year, is rumored to be seriously eyeing the race.

KANSAS CITY, MO (KCTV5) — The investigation into the police shooting of Malcolm Johnson has cleared another step. The case file for the Missouri Highway Patrol is now in Jefferson City, according … END_OF_DOCUMENT_TOKEN_TO_BE_REPLACED

Progress is slow on redeveloping the area around Capitol Avenue, but the revitalization of the Capital City’s historic corridor is starting to show the results of some much needed love.The East … END_OF_DOCUMENT_TOKEN_TO_BE_REPLACED

A new gaming venue in Jefferson City is hoping to create a safe, comfortable space for all local gamers to enjoy.Mimics JC held a soft opening last weekend at its new spot at 312 Lafayette St. as the … END_OF_DOCUMENT_TOKEN_TO_BE_REPLACED