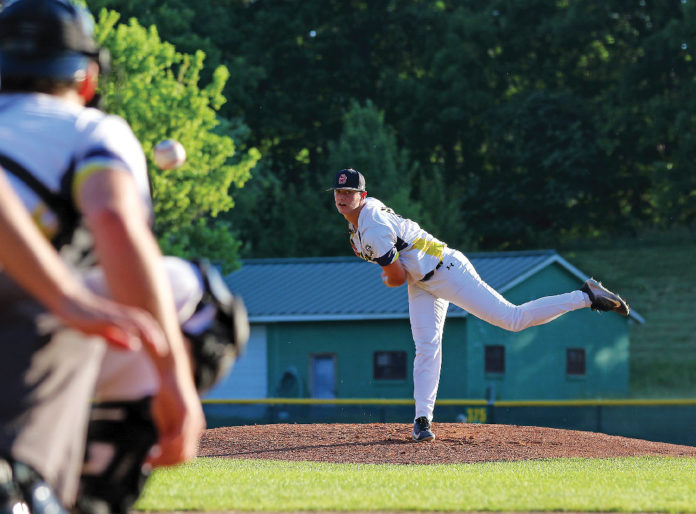 It has been a smooth transition for Ethan Osborne this summer as he progress from high school baseball to college baseball.
In one week with the Jefferson City Renegades, the Southern Boone graduate has made two starts on the mound, and both have been quality starts.
“It’s definitely different from high school ball,” Osborne said Wednesday after the Renegades’ 5-2 loss to the Nevada Griffons in MINK League action at Vivion Field. “I think the biggest difference is it’s harder to get guys out, they’re always putting the bat on the ball.”
Osborne gave up five hits, all singles, in six innings and allowed just one run before exiting after throwing 105 pitches.
Still, the left-hander struck out eight batters for his second consecutive outing, and Osborne has only given up one run in 13 innings with the Renegades.
“In high school, teams are always good, but there are always some weak spots in the lineup,” Osborne said. “When you get to doing this kind of stuff, there’s really just one through nine with a loaded lineup, and you have to be ready to fight every single at-bat.”
The Renegades took a 1-0 lead in the bottom of the first, without the benefit of a hit. Caden Diel drew a leadoff walk, Brady Voss was hit by a pitch and Hamilton Anderson reached on a fielder’s choice. During that play, Diel never slowed down, scoring all the way from second base to put Jefferson City ahead.
The Griffons answered with a run in the top of the third on an RBI single by Joshua Campuzano. However, Osborne was able to escape multiple jams in the no-decision, stranding eight runners on base.
“Today, I struggled a little bit early with my command,” Osborne said. “I’ve been mixing my pitches really well, sometimes maybe too much. I should probably go to the fastball more often.”
Osborne settled down after allowing his first run of the summer, retiring eight in a row after Campuzano’s hit.
“From there, I just kind of put it on cruise control,” Osborne said. “I started locating the ball a little better.”
Osborne, the Tri-County Conference pitcher of the year, has a 0.69 ERA in his two starts.
“I like this opportunity because I get to play with a lot of guys who are older than me,” Osborne said. “I get to meet new people, which is going to be something big for me down at SEMO next year.”
But Nevada’s Chase Beiter was just as effective, striking out eight in seven innings and retiring 12 of the last 14 batters he faced.
Before Beiter got in a groove, Renegades first baseman Carter Mize grooved the first pitch he saw in the fourth inning for a solo home run to right-center field, putting Jefferson City back on top 2-1.
“He studies his at-bats and made an adjustment,” Renegades manager Mike DeMilia said. “He put a good swing on it, and he had a couple more good at-bats after that. He’s a really good hitter, and when he’s right, he’s a tough out.”
Nevada (4-3) put three straight batters on base to start the seventh inning against Jefferson City relief pitcher Kaden Helsel. The South Callaway graduate answered with a strikeout, but Alec Telles followed that with a grand slam down the left-field line, giving the Griffons their first lead of the game at 5-2.
Jefferson City was only able to get one baserunner to reach third base in the final three innings.
“We left opportunities out there,” DeMilia said. “We could have scored more runs, it just didn’t happen. The last two games, we really haven’t swung the bats great. We got off to a good start and just kind of hit the wall a little bit.”
Josef Keilholz, a Fatima graduate, had two of the Renegades’ five hits. He doubled into the left-field corner in the seventh and reached on an infield single in the ninth.
In addition to Mize’s homer, Diel and Jason Marte singled for Jefferson City’s other hits.
Through the first week of the MINK League season, the Renegades have a 4-3 record.
“We have some flaws, we’re not perfect, but they’re working hard at it and they’re showing up to the yard early and getting work in,” DeMilia said. “We just have to keep doing what we’re doing.
“As long as we’re playing good baseball and continue to get better, that’s the big thing.”
The Renegades will host the Jefferson City Legends at 7 p.m. on Friday at Vivion Field in an exhibition game.

Progress is slow on redeveloping the area around Capitol Avenue, but the revitalization of the Capital City’s historic corridor is starting to show the results of some much needed love.The East … END_OF_DOCUMENT_TOKEN_TO_BE_REPLACED

A new gaming venue in Jefferson City is hoping to create a safe, comfortable space for all local gamers to enjoy.Mimics JC held a soft opening last weekend at its new spot at 312 Lafayette St. as the … END_OF_DOCUMENT_TOKEN_TO_BE_REPLACED

The Gerhard Herman Dulle home on St. Mary’s Boulevard earned a Local Historic Landmark Award from the Jefferson City Historic Preservation Commission in 1994. A tour of the stately structure begins in … END_OF_DOCUMENT_TOKEN_TO_BE_REPLACED