What makes a man qualified to smoke weed in an authoritative manner?

It’s a question that has been rattling around in my brain for a few weeks now as I’ve prepared to write this column, the debut piece of cannabis criticism for the Riverfront Times. A feeling of imposter syndrome set in almost immediately upon accepting this gig, as I wondered: What in the world makes me a person whose stoned ramblings should be printed and disseminated to the masses? And just who the hell do I think I am, anyway?

Malcolm Gladwell might suggest 10,000 hours of practice, and if that’s applicable here, then I’m in the clear. But Malcolm Gladwell is also an uptight nerd who has probably never even done a knife hit off of a hot stove, so I’m not quite sure he’s the man I should look to for guidance on this matter.

So what are my qualifications? Well for one, I did, like, a lot of knife hits in my wild youth. Completely ruined several butter knives, in fact. A downright menace to kitchenware, you could say. But outside of that? I really don’t know. I suppose I’m mostly well suited for this job simply because of my newfound ability to charm editors into paying me to smoke weed.

Which brings me to Root 66‘s Dogtown location (6660 Manchester Avenue, 314-282-7978) on a recent sunny afternoon. Tucked in a strip-mall parking lot off of Manchester Avenue in a building that was formerly a Taco Bell sits the dispensary that provided me with my first home-state legal weed shopping experience.

Upon arrival, I stepped into a lobby akin to an airlock, with the doors to the dispensary floor on the left and a window where a staff member is stationed straight ahead. Here, I handed over my ID and medical card and was given a sheet of paper with the words “Root 66 Hold Harmless Agreement” across the top — basically a document with a series of boxes to check proving you’ve agreed not to bring any weapons inside or run any recording devices or anything like that.

With my paperwork in order, my myriad recording devices at the ready and all my weapons set to “kill,” I was buzzed into the sales floor. There, I found a brightly lit space with cream-colored walls and dark green trim. A handful of glass cases arranged throughout the room displayed the shop’s wares, and a friendly employee with tattoos on his arms and an enamel Misfits pin on his lanyard — one depicting the Crimson Ghost wearing an Infinity Gauntlet, interestingly — promptly approached and asked how he could help.

At the time of my visit, Root 66 had four varieties of flower in stock: Diesel Train, San Fernando Valley OG, Gorilla Pie and Kansas City Kush. As is the case with many dispensaries, Root 66 also has an online menu that I’d looked at in advance of my visit, so I had a pretty good idea of what I wanted, but I still took the time to chat up my budtender about the strains on hand and found him to be quite helpful and knowledgeable (and persuasive, even, as he successfully upsold me a gram of a strain I’d not initially intended to purchase).

I opted for an eighth of Diesel Train ($59.99 after a $10 discount due to a sale) and one gram of Kansas City Kush ($24.99). The store also stocks pre-rolls and edibles, and had just received a supply of vape cartridges on the day of my visit. Looking over the rest of the selection, I opted to grab a Keef Brands Bubba Kush Root Beer ($23.99), because I have never had a soda that costs more than $20 before and that shit seems wild. 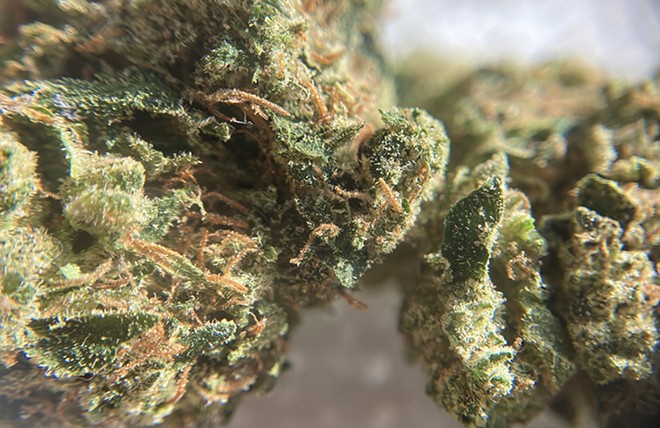 I started with the Diesel Train. Grown by Illicit Gardens, a Kansas City-area supplier, the sativa strain is a cross between Ghost Train Haze and East Coast Sour Diesel, whose THC content is rated at 21.17 percent. It came in a branded glass jar; upon opening it I was greeted with a bright smell that was both citrusy and gas-like (there’s a reason for the “Diesel” in the name). The buds are darker green with some not-too-prominent orange hairs and what looks like a delicious sugarcoating of trichomes, and when breaking them up I found them to be dense but fluffy, and a little sticky. On inhale, the smoke has a bit of that diesel flavor, bright but not particularly rich, and just a little cough inducing. I felt my eyelids get heavy right away, and soon I found myself to be equal parts talkative and forgetful — it’s the type of weed that will find you suddenly and completely unaware what story you were just excitedly telling seconds ago, but not too concerned about remembering.

The following day, I tried the Kansas City Kush, also grown by Illicit Gardens. A 24.2 percent THC indica strain that my budtender told me was in high demand at present (there’s that successful upsell!), this strain’s buds are a more pale green, with darker green spots and orange hairs, and positively glistening with trichomes (note: it is possible that my long history with black-market cannabis is influencing my wonderment at the sparkliness of these strains, since most of the street shit I’ve purchased could not compare in this regard to what I’ve seen so far from the dispensaries). These buds are fluffier than the Diesel Train, but since I only purchased a gram they came packed in a plastic pouch, and they were a little compressed by the time I dove in. A deep grassy, lightly fruity smell came out of the pouch when I opened it, and there was a dark, almost coffee-like aroma as I broke up the buds. This strain has a pretty mellow taste — I couldn’t really detect much on inhale, but upon exhale there was a light, fruity earthiness to it. My qualifying medical condition happens to be chronic pain, and this strain wiped that out pretty effectively. It also works phenomenally well as an appetite stimulant, as evidenced by the half bag of jalapeño chips I gleefully dipped in a tub of vanilla ice cream and consumed on my couch.

Speaking of ice cream, we have to talk about that Bubba Kush Root Beer. Bottled by Colorado cannabis-infused beverage company Keef Brands and loaded with 100 milligrams of THC, the root beer is just one of multiple classic soda flavors on offer at Root 66 and many other local dispensaries. I opted for this flavor for one simple reason: I wanted a root beer float. A tall glass, three scoops of vanilla and one straw later, I was engaged in one of life’s simpler but more enduring pleasures — and, importantly, the ice cream/root beer combo did a pretty great job of masking the familiar earthy flavor of the cannabis, which was only really noticeable as an aftertaste.

Man, let me tell you: This stuff knocked me on my ass. A couple hours after consuming it my limbs began to feel like anchors weighing the rest of my body down, my eyes were heavy, and my chronic pain was just a light whisper rather than a muffled scream. As time wore on in newly impossible-to-quantify increments, I even felt some anxiety creep in — which is not normally an issue for me and mostly serves as an indication that I’ve gotten myself pretty outrageously high. I opted to lay down on my couch to try to relax a little, and I swear I was out cold for the night within two minutes. Handle these things with care — they pack a wallop.

In all, it’s fair to say I am ecstatic with my first Missouri medical dispensary experience. The staff at Root 66 is helpful and friendly, the products are potent and the purchasing process is hassle-free. It’s easy to imagine that a first-timer with no prior cannabis experience could step into the doors of this place and be carefully guided through the different options on hand to find the product that best serves their needs — no prior qualifications or experience with knife hits necessary.

Thomas K. Chimchards is RFT’s resident cannabis correspondent and root beer float enthusiast. Email him tips at tommy.chim@riverfronttimes.com and follow him on Twitter at @TOMMYCHIMS.

(The Center Square) – A year after Democrat auditor Nicole Galloway’s audit revealed an employee stole $316,887 from the city of Center in northeast Missouri, a follow-up report found only slight … END_OF_DOCUMENT_TOKEN_TO_BE_REPLACED

JEFFERSON CITY, Mo. – The average number of COVID-19 cases is at a seven-week low. The 7-day rolling average for cases in Missouri sits at 1,387; yesterday, it was 1,435. Exactly one month ago, the … END_OF_DOCUMENT_TOKEN_TO_BE_REPLACED

Chad Niezing of Manchester captured the title Sunday in the Missouri Mid-Amateur Championship at Jefferson City Country Club. Niezing opened with a 67 on Saturday before carding a 70 on Sunday to win … END_OF_DOCUMENT_TOKEN_TO_BE_REPLACED

Terri Blevins, 44, registers for help at an event sponsored by the city of St. Louis with the Metropolitan St. Louis Equal Housing and Opportunity Council to assist people with filing their … END_OF_DOCUMENT_TOKEN_TO_BE_REPLACED