The scientologists are not happy about Missouri’s new foray into medicinal marijuana.

An April 18 newsletter sent out by the church-affiliated Citizens Commission on Human Rights of St. Louis, titled “The Proliferation of Weed in Missouri,” makes clear their opposition to the nascent industry. But interestingly, theirs is not the Reefer Madness fears of old that smoking the devil’s lettuce will lead to bouts of criminal insanity and wildly reckless behavior. Instead, the concern seems to be that it will become a tool for those dastardly psychiatrists to use to further ensnare and oppress their patients.

“Cannabis can only chemically mask problems and symptoms, it cannot and never will be able to solve problems,” reads the newsletter in part. “People in desperate circumstances must be provided proper and effective medical care. Medical, not psychiatric, attention, good nutrition, a healthy, safe environment and activity that promotes confidence will do far more than the brutality of psychiatry’s unproven drug treatments.”

Is this hyperbole? Sure. Is it also dangerous nonsense? You betcha. But wait, does anybody really care what the Church of Scientology thinks about cannabis anyway? Nah, not at all. It could make things pretty interesting at the next meeting of the neighborhood association, though.

That’s because Jane Dispensary (6662 Delmar Blvd, University City; 314-464-4420) has just opened a mere two blocks away from the church’s St. Louis headquarters — and their philosophy regarding weed’s psychiatric effects couldn’t be more different.

According to its website, “Jane Dispensary not only offers premium cannabis products, but we’re committed to cannabis education.” They plan to host seminars and workshops to help customers “learn about safety, types of cannabis, and the physical and mental health contributions of cannabis.”

As a person with an obviously malfunctioning brain and a lack of overall respect for the teachings of the church of scientology, I figured I’d stop in and see for myself what Jane’s products can achieve. Housed in the space that formerly held the Vault clothing store in the Loop, the dispensary has a boutique feel that sets it apart from other local shops — looking around its small, spare waiting room, words like “quaint” and “artisanal” and “small batch” all came to mind. I approached a woman behind a desk who asked for my medical card and ID, and who directed me to remove my mask and show my face to a security camera.

The shop was packed when I arrived, owing to a “flower hour” flash sale that saw eighths being discounted at 40 percent off for 60 minutes only. I’d seen the sale advertised on social media, and based on the bustling atmosphere the day of my visit, evidently so did everyone else. Being that Missouri requires a one-to-one patient to employee ratio for all dispensaries, I had a seat for five minutes or so while I waited for a member of staff to emerge from behind the doors to the floor of the shop.

Once inside, I told my budtender that I was here for the sale. She led me to the checkout counter, a long glass case that contains small jars of flower with magnified lids. The sale covered only C4-branded strains; on hand during my visit were eighths of White 99, Bubba Fett, Wedding Cake and Gelato, as well as Flora Farms-branded Purple Diesel, Post Traumatic Purple and Blue Dream. 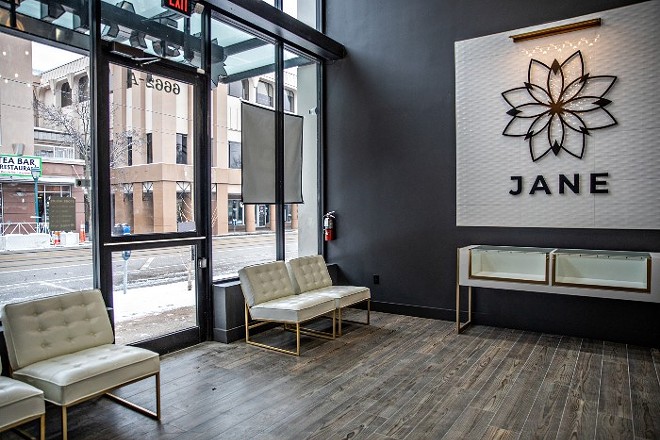 I dug into the Bubba Fett first. I was a little surprised to find that the C4-branded pouch was filled with teeny tiny little “popcorn” nuggets, the kind that you’d get for a discount at some of the Illinois dispensaries — but then I remembered that I’d gotten my bag at a pretty deep discount, too, so there really wasn’t anything to complain about. I was greeted with a dark, rich, slightly skunky smell as I broke the small, mostly darker green nuggets up. On inhale this strain has a flavorful, sweet taste that had me coughing at first, but soon smoothed out into an enjoyable smoke.

Let me tell you, this strain is downright stupefying. Before I’d even finished the bowl I felt as though I’d been smacked in the face with a shovel of stonedness, and the bags under my eyes felt like they weighed a thousand pounds. This indica-dominant strain clocks in at a considerable 20.54 percent THC, so it shouldn’t be particularly surprising that it’s so strong, but I was still taken aback. My chronic pain melted away and I felt relaxed and happy, and pretty hungry. Honestly, popcorn nuggets aside, this strain immediately launched itself to the top of my list of favorites, even if I did find the words, “Don’t panic, you’ll be fine, just high” in my notebook upon a review. I’ll be making sure to keep some Bubba Fett in my captain’s cupboard going forward.

The following day I got to work on the Wedding Cake. Another indica-dominant strain with a THC rating of 18.63 percent, this bag boasted some more fluffy buds, covered with trichomes, dark orange hairs and purplish dark patches. Upon opening the bag I was met with a rich, spicy scent, on the floral side with some sour and skunky notes. This strain is pretty sticky on breakup; it might have been better for me to use a grinder. (I’ve always enjoyed the tactile sensation of using my fingers, but I know that’s not the case for everyone, so word to the wise.) True to its name, the Wedding Cake was sweet and flavorful on inhale, and shortly after smoking I was chatty and smiling uncontrollably. Like the Bubba Fett, this strain is pretty damn strong and probably best for those with a high tolerance, though I wasn’t nearly so outright incapacitated with this one.

Next, I tried the Honeybee gummies. Brought to life by longtime St. Louis chef Dave Owens, who worked as the chief chocolatier for Bissinger’s for twelve years before signing on to work with Proper Cannabis on their line of edibles, the black cherry cola gumdrops come in a package of twenty, each with 5 percent THC content. I ate seven of them, and let me tell you, if I wasn’t concerned I’d be blasted to the moon if I kept going I would have gleefully consumed several more.

More often than not, edibles are created with the primary intention being to mask the taste of the THC; here, creating something downright delicious was clearly the motivating factor. At first bite you’re met with a tart black cherry flavor, which softens out to the cola taste on the finish. It’s similar to a cherry snow cone, but in gummy form — sweet, but really well balanced and not syrupy. As for their effects, the 35 milligrams of THC I consumed left me with a relaxed “take the edge off” high, not too overpowering, and I was still able to function as normal, but with a noticeable decrease in chronic pain. I’ll probably eat more next time.

If these are the psychiatric effects I’ve been warned/encouraged about, I’m all the way on board. It can be hard to take some of the claims that cannabis evangelists make about its alleged cure-all effects seriously, and I’d personally be more inclined to tell someone to go ahead and see a medical professional for their mental health needs than to tell them to smoke a joint. But then too, it can be hard to take the scientologists seriously like, ever.

Seriously, scientology guys, maybe you should head two blocks down and take a visit to Jane to pick up some of their wares. It might chill you out a little.

Welcome to Higher Thoughts, wherein ol’ Tommy Chims smokes one strain from this review — in this case, Wedding Cake — and then immediately writes whatever comes to mind in the hopes of giving you, dear reader, a clearer picture of its overall mental effects: no rules, no predetermined word counts and, most crucially, no editing. Here we go:

Janet peered at the morning sunrise out her kitchen window before gripping her coffee mug and walking to her porch. She’d recently found that watching the bus pick up the local children for school was just the thing she needed to start her day, their smiling faces serving as a distraction from the loneliness that had crept into her life of late.

“Hello ma’am, the name’s Dorian Belle, door-to-door doorbell salesman,” he said, lifting himself off the ground. “I’ve been sitting on your porch all night long. Do you know why?”

Dorian smiled as he delivered the pitch that had made “Dorian Belle” a household name in the high-stakes world of door-to-door doorbell sales: “Because you don’t have a doorbell.”

In that moment, Janet knew that she’d be opening up her wallet today — and, maybe, also her heart.

Was that helpful? Who knows! See you next week.

Thomas K. Chimchards is RFT’s resident cannabis correspondent and aspiring door-to-door doorbell salesman. Email him tips at tommy.chim@riverfronttimes.com and follow him on Twitter at @TOMMYCHIMS.

A Jefferson City woman died Saturday after she was thrown out of a boat as it was traveling along the Missouri River.Tanna R. Henson, 48, was pronounced dead at 11:10 p.m. at University Hospital in … END_OF_DOCUMENT_TOKEN_TO_BE_REPLACED

JEFFERSON CITY, Mo. (AP) – Missouri is at risk of losing $4.5 billion in tax revenue and federal funding for Medicaid because of a fight between lawmakers over contraceptives.At issue is a state tax … END_OF_DOCUMENT_TOKEN_TO_BE_REPLACED