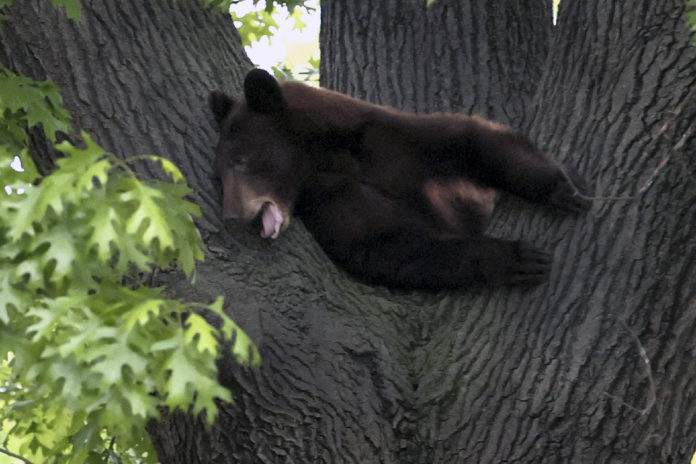 Bear in mind, it’s not a common sight to see a young bear scamper in front of your car in the Capital City.
But according to several motorists on the Eastside, that’s exactly what they saw Thursday afternoon, according to Jefferson City police.
“I was making a left turn from Eastland Drive, going to the on-ramp to U.S. 50 heading west into Jefferson City, when I saw a black thing run past my vehicle,” Dr. Keith Segall said. “It went from left to right, and when I got a good look at it, it appeared to be a young bear, not a cub.
“It went down into a ravine and tried to climb back up to the area where I saw it, but it fell down because it was slick due to the rain falling at the time,” he said. “It did this a couple of more times before it left the area.”
Segall said he and another driver saw the bear, and they called the Missouri Highway Patrol, who then contacted the Jefferson City Police Department.
JCPD officials said they did get several calls from drivers in the area saying they saw a bear, but officers never were able to find it.
“I’ve seen bears in Dexter and by my office in Vienna, but this shocked me to see one in the city limits here,” Segall said. “I wish I could have taken a picture of it with my phone.”

A Jefferson City woman died Saturday after she was thrown out of a boat as it was traveling along the Missouri River.Tanna R. Henson, 48, was pronounced dead at 11:10 p.m. at University Hospital in … END_OF_DOCUMENT_TOKEN_TO_BE_REPLACED

JEFFERSON CITY, Mo. (AP) – Missouri is at risk of losing $4.5 billion in tax revenue and federal funding for Medicaid because of a fight between lawmakers over contraceptives.At issue is a state tax … END_OF_DOCUMENT_TOKEN_TO_BE_REPLACED