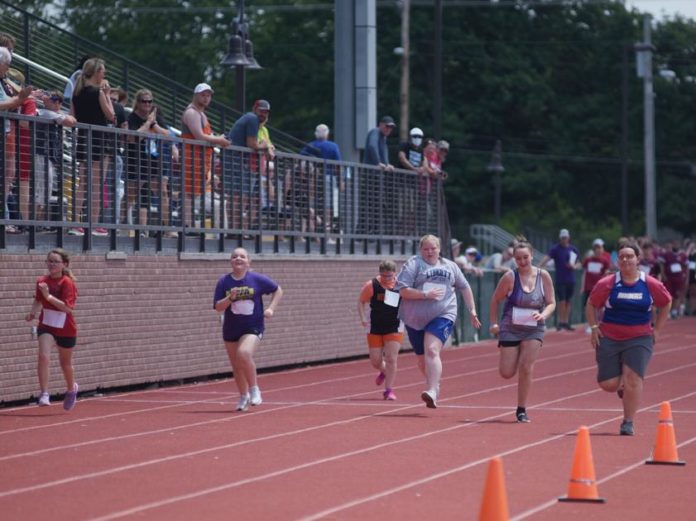 Special Olympics Missouri returned to Columbia for the first time in seven years Saturday. The opening ceremony kicked off around 9:45 a.m. at Hickman High School .Teams were clad in colored shirts representing their cities and counties — Moberly, Crawford County, Maryville and just about every corner of the Show-Me State were represented in the competitions.The games were supposed to be hosted in Columbia in 2020 but were held virtually due to COVID-19. The games, which previously took place in Jefferson City and Springfield, are set to be hosted in Columbia until 2023. This year’s games marked the 50th anniversary of Special Olympics Missouri.“We’ve had great support and volunteers from around the Columbia area,” director of sports and training Tim Schuster said. “It’s centrally located, which really works well with our new model of doing one-day events.”This is the first time since 2018 that the Special Olympics have been held in person. Before the pandemic in 2020, the 2019 games were canceled because of tornado damage in Jefferson City.“It’s awesome to be back,” Schuster said. “It’s awesome to see all the athletes. It’s awesome to see all the volunteers. We’re one big family. The state events are like our Super Bowl and family reunions all rolled into one. … It’s really great seeing everybody.”The lighting of the torch was met with chants of “light it” from athletes and coaches seated at the top of the bleachers. With the igniting of the flame, the games were officially underway.Athletes participated in a number of events, including running and walking races, wheelchair events, shot put, softball throws, powerlifting, swimming and volleyball. It was a one-day event because of the pandemic, but there is a hope to go back to multi-day events once the pandemic fully comes to an end.“It’s a lot smaller than it usually is,” volunteer Nancy Mairon said. “We couldn’t have the ceremony the night before. Just being here is inspirational. These people — there’s nothing wrong with them. They’re just as good as anybody else, and they know it, and they show it.”Mairon has been volunteering for the Special Olympics for a large portion of the organization’s existence. She and her husband got involved with the Special Olympics through the Knights of Columbus and have been part of the games and events ever since.“My husband and I have volunteered with this for 25 years,” Mairon said. “We’ve gotten other people involved in it — our grandsons, our family, other Knights of Columbus from different councils.”“These people are special,” she continued. “They’re special, special people, and we love to watch.”Some of the people helping put on the event were clad with permed wigs because of the 50th anniversary. It was a way to commemorate the anniversary while also having a good time and ensuring the games went smoothly.“We went 70s,” Schuster said. “It’s our 50th anniversary from 1971, so we went with some retro wigs, and we’re just trying to have a little fun with it.”Mairon said that people should get involved with the Special Olympics. She said that it is a life-changing experience and that she has enjoyed working with the organization for as long as she has.“Anybody can get involved in the Special Olympics, so if you have a chance to do it — do it,” Mairon said. “It will change your life.”

KANSAS CITY, MO (KCTV5) — The investigation into the police shooting of Malcolm Johnson has cleared another step. The case file for the Missouri Highway Patrol is now in Jefferson City, according … END_OF_DOCUMENT_TOKEN_TO_BE_REPLACED

Progress is slow on redeveloping the area around Capitol Avenue, but the revitalization of the Capital City’s historic corridor is starting to show the results of some much needed love.The East … END_OF_DOCUMENT_TOKEN_TO_BE_REPLACED

A new gaming venue in Jefferson City is hoping to create a safe, comfortable space for all local gamers to enjoy.Mimics JC held a soft opening last weekend at its new spot at 312 Lafayette St. as the … END_OF_DOCUMENT_TOKEN_TO_BE_REPLACED