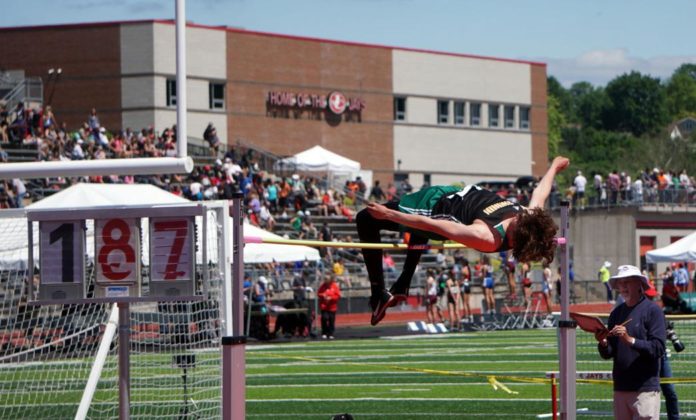 JEFFERSON CITY, Mo. — The MSHSAA Class 3 state championships could not have gotten off to a much worse start for the Spoofhounds.Garrett Dumke was in Saturday’s first event — the 3,200-meter run. He was just beginning his seventh lap, sitting in medal contention, when his left foot landed on the medal rail which goes around the inside of lane one on the track at Jefferson City’s Adkins Stadium.That caused him to attempt to catch himself by planting his right foot and his ankle gave out. Dumke crashed to the track in obvious pain, ending his race and putting the other two events he qualified for in doubt.

“It was devastating after that race,” Dumke said. “… But I did everything I could between races to get ready. I couldn’t let the team down. They’ve all worked so hard this whole season, so I dug deep and I put everything out there for these guys.”The second event of the day for Maryville was also Dumke’s second with the 4×800-meter relay less than two hours after Dumke’s fall. The Hounds had alternate Jake Walker ready if Dumke could not go, but the senior had his ankle taped up and limped out onto the track to run the anchor leg of the race.“Probably his biggest asset is his leadership,” Maryville coach Rodney Bade said.Dumke’s anchor leg ended up being a new personal-best in the 800-meters and the fastest of the day for Maryville and he crossed the finish line in seventh-place.“It is swollen, I mean it is really swollen,” Bade said. “He basically couldn’t walk, but he could run. I still don’t know how you explain that. He ran his fastest 800 of the year and gave him a medal and the rest of those kids.”Freshman Connor Blackford, and juniors Jag Galapin and Cale Sterling ran the first three legs of the race which gives the Hounds 4-straight state medals in the 4×800-meter relay with a new group of runners each season.“I think it really shows how great of a coach that Coach Bade is,” Dumke said. “He takes squads every year and just creates amazing teams. He is definitely one of the best distance coaches in the state.”Dumke’s ankle didn’t improve as the day went on and he was forced to scratch the 1,600-meter run, but the Spoofhounds were still able earn a medal in the event with Blackford coming around in eighth place.“He is just a phenomenal racer,” Bade said. “And it is not necessarily that he is just crazy competitive. He as a freshman already is intelligent in racing. He positions himself in the right places. He makes the moves at the right time. It is a whole bunch of stuff that a lot of kids take three whole seasons of track races to figure out. It is just natural for him.”

For Blackford, earning two state medals as a freshman was a surreal experience.“It is fantastic,” Blackford said. “Without having a season last year, I truly — like everyone — had no expectations. … So come in here and be on the podium in both the 4×8 and 1,600, it is great. It is something I never thought would have happened.”On a day of shocking runs, Jesus Flores might have provided the most excitement in the high jump. Flores came in ranked ninth in the high jump and the sophomore was hoping to find a way to wind up with a medal.“I was not expecting this today,” Flores said. “I started off pretty bad, but as soon as I hit 1.85, my old PR, it just went uphill from there.”At each of Flores’ first three heights, he missed on his first try, but made his second. The third of those was his personal best at 1.85 meters. Then things got crazy for the sophomore.“Things just all of a sudden clicked,” Bade said.Flores cleared his next four heights, each eclipsing his previous personal-best. By the time he finally knocked over the bar at 1.95 meters — nearly 6-foot-5, he was one of just four jumpers remaining in the field.“He kept clearing heights and he was like, ‘How’d I just do that,’” Bade said. “One of our runners said, ‘You just blacked out and then 30 minutes later, all of a sudden your are third.’”Flores cleared 1.95 on his second attempt — which after he and Centralia senior Liam Hill went out at 1.97 meters, earned Flores third behind only Center senior Roman Smith and Bowling Green senior Michael Starks.“I’m excited for next year,” Flores, who’s big sister Ilse Flores convinced him to try track and field this year, said.Other state finishes for Maryville included Galapin taking 11th in the 3,200-meter run, senior Beau Gillespie taking 12th in the discus and sophomore Keaton Stone finishing 13th in the triple jump.

A Jefferson City woman died Saturday after she was thrown out of a boat as it was traveling along the Missouri River.Tanna R. Henson, 48, was pronounced dead at 11:10 p.m. at University Hospital in … END_OF_DOCUMENT_TOKEN_TO_BE_REPLACED

JEFFERSON CITY, Mo. (AP) – Missouri is at risk of losing $4.5 billion in tax revenue and federal funding for Medicaid because of a fight between lawmakers over contraceptives.At issue is a state tax … END_OF_DOCUMENT_TOKEN_TO_BE_REPLACED