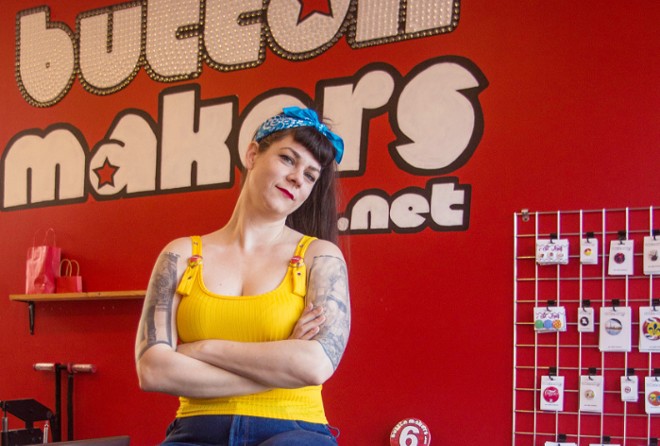 St. Louis’ Cherokee Street-based ButtonMakers shop took an unlikely path to get to where it is today.

It’s a story that started two decades ago, and one that saw the shop’s owner, St. Louis native Rebecca Bolte, criss-crossing the country from Florida to Washington before settling back in her hometown. During her time away from Missouri, she lived as part of a DIY punk collective in Florida, watched her business grow in a Seattle warehouse and even royally pissed off the handlers of MSNBC’s Chris Matthews during some time spent working at the Democratic National Convention. Through it all, ButtonMakers has been her financial mainstay — and as it reaches its twentieth birthday this year, Bolte says she has every intention to keep it that way.

Bolte, now 40, says she set out on her own at the age of nineteen, and that ButtonMakers initially started as a screenprinting shop duplicating CDs for Indiana’s Plan-It-X Records.

“I met them through this band This Bike Is a Pipe Bomb,” Bolte says of Plan-It-X. “I lived in a punk collective with them in Florida, and they were on Plan-It-X, I believe, and that’s how I met those guys. They just needed somebody to make their CDs — it’s like a DIY record label, you know? So we literally just got — there’s a store in Seattle called RE-PC, and we just got this bank of computers at the time and were literally just duplicating CDs that way, screenprinting the labels on them and sending them off to Indiana. That’s how we got started.”

At the time, the company that would become known as ButtonMakers was housed in Seattle as well, in what Bolte describes as “a windowless warehouse with a bunch of dumpster-diving crazy crusty punks” living in it. As time went on, Plan-It-X tapped Bolte to screenprint their shirts for them as well. Soon, they asked about buttons.

“So we went online looking for a place to buy equipment to do that, and we couldn’t find any place that was selling that stuff,” Bolte explains. “We had to search the patent office to find a manufacturer. And so we got the equipment, we fulfilled our customer’s order, and it just kind of dawned on us that since there was no internet presence for button-making supplies in 2001 that we should start retailing that stuff, too.”

Bolte says she put together a section of what was then her punk merch website just for button-making machines and equipment. Before long, she was sold out of everything.

“Most of our customers were, like, churches and schools and non-profits, and probably not super interested in all the weird punk rock stuff we were selling as well,” Bolte laughs. “So we then launched buttonmakers.net to be its own entity, and it eventually just took over — it was so much more popular than any of the other things we were doing that eventually it became its own thing.

“The biggest clients are non-profits, they’re school districts, municipalities — stuff like that,” she adds. “So people who are just not in that [punk] world at all.”

Bolte’s goods and services weren’t just popular with neighborhood organizations and the like, though. Soon enough, she was tapped to work Barack Obama’s 2008 and 2012 presidential campaigns, and even do some work at the 2008 Democratic National Convention.

“We just got a phone call from MSNBC,” Bolte explains. “Well, the design firm that MSNBC had hired was doing a brand activation at the Democratic National Convention, and they hired us to do on-site buttons. So people would come over and get their name on a button. We made well over 10,000 buttons in a day — it was incredible. And I almost spilled coffee on Jesse Jackson, it was great.”

That close call with Jesse Jackson wasn’t her only brush with celebrity that week, though. One day, as she and her team were wrapping up and heading out, they ran afoul of Hardball anchor Chris Matthews.

“We had worked that entire convention; it was just wall to wall people. We worked our butts off, and we had to fly all the equipment and everything out there — it was a lot of stuff,” she says. “And the only way to get out is to just pack up everything and handcart it through this crowd. So we did that, and we finally made it over to the one elevator that was the slowest elevator on Earth. And we’re waiting — it’s finally time to go home — and the door opens. We try to muscle our way in there, and some handler is like, ‘No no no no no, Chris Matthews is in this elevator.’ And I’m like, ‘Chris Matthews better move his ass over.’ And they got really mad at me and shut the door. And then I got a call from the people who hired us, and they were very upset with me about that. They were like, ‘Were you rude to Chris Matthews?’ I was like, ‘I don’t know, I guess. Sorry.’”

Obviously, things were going well for the business. But by 2011 her overhead costs became too great. That same windowless warehouse full of crust punks had skyrocketed in rent from $900 a month to $4,000. She knew then that it was time to go, and she decided to move back to her hometown.

“I love St. Louis; I’ve always felt that this is my home,” she says. “Seattle never quite felt like home. Cherokee Street, though, was just calling my name, I feel like. I was able to move back here and pay a third of the rent for a comparable space. My business is primarily an internet business, so not only is the rent more affordable here, but all of my suppliers are closer. So the transit is faster for shipping, inbound and outbound — I can get packages to New York quite a bit faster, etc. So that was helpful, and I was able to buy a really nice house here and start a family, and have a much better life really, just because it’s so much more affordable.”

Bolte opened her Cherokee Street storefront in January 2012. Since then, she’s become a go-to for non-profits, politicians and punks alike — she’s worked with many local bands, but also with local politicians including Alderwoman Cara Spencer and former state Rep. Bruce Frank. She’s even started a summer program called Pin Squad wherein she lets kids from the neighborhood come in and design their own buttons to take and sell. If those kids then come back to her with the money, she holds it for them until the end of summer, when she matches their savings dollar for dollar.

“They come into the shop anyway to charge their phones and use wifi, so I figured I’d start trying to impart some entrepreneurial and financial literacy skills on them,” she reasons. “They always have access to their money, but saving it makes it grow. And if you can find a hustle, even something as silly as buttons, you can get by without the risk of getting locked up.”

Bolte’s own hustle took a major hit at the beginning of the COVID-19 pandemic. The shop’s customer base, by and large, is centered on people and organizations who are promoting events — making her and her team something of an ancillary live events-support industry. With the restrictions on gatherings that came with the pandemic, Bolte, whose business is proudly union-run, was forced to lay off employees. At present it’s just her and her partner Nicholas James running things, with the latter handling the shop’s sticker-making side of things.

But Bolte makes it clear on no uncertain terms that the business she founded some twenty years ago isn’t going anywhere.

“It’s been difficult for sure,” she says. “I think those punk rock ethics definitely kicked in, because I’m just like, if I have to pack up and move into the basement — if I have to make buttons out of my van on Cherokee Street, I will do that. You know what I mean? This company is not going anywhere. Really, it’s because I don’t have any other options. So I gotta make it work — and I’m gonna make it work, no matter what.”

O’FALLON, Mo. (AP) — Missouri Gov. Mike Parson announced Tuesday that he made good on his promise to pardon a couple who gained notoriety for pointing guns at social justice demonstrators as they … END_OF_DOCUMENT_TOKEN_TO_BE_REPLACED

Writing in a 16-page decision, Karen Boeger, who oversees contracts and purchasing for the Office of Administration, said Corizon had no basis for that accusation. Support … END_OF_DOCUMENT_TOKEN_TO_BE_REPLACED

(Licking, MO) -- A Missouri prisoner who walked away from a June work release assignment at the state fairgrounds in Sedalia has been transferred to a maximum-security prison in Licking. The state … END_OF_DOCUMENT_TOKEN_TO_BE_REPLACED