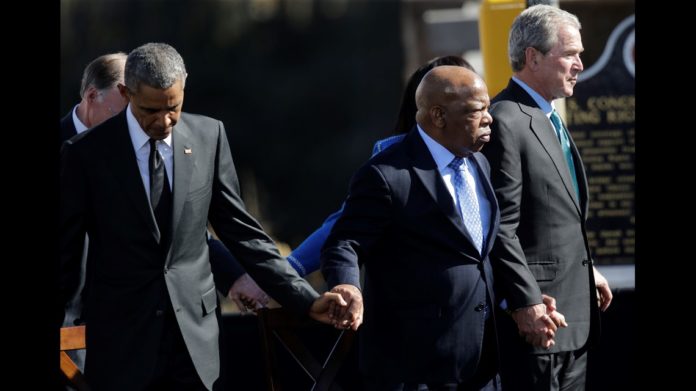 Mayor Tishaura Jones, Rep. Cori Bush and other religious and city leaders will participate in Votercade and a gathering Saturday at Sumner HS

The Votercade begins at 2 p.m., with a Celebration Village to follow at 3, at Tandy Recreation Center, 4206 Kennerly Ave.

The event is part of a national coalition of 180 groups to urge Congress to pass S.1/H. 1, the For the People Act; H.R. 4, the John Lewis Voting Rights Advancement Act; H.R. 51, Washington, D.C. Admission Act; and to eliminate the filibuster.

In the state capital, the Jefferson City NAACP and JC Vote! organized an hourlong demonstration Saturday morning to show support for police reform and speak out against voter suppression and laws limiting protests and ballot initiatives. In addition, there will be opportunities to write letters to Missouri legislators.

The Jefferson City coalition “intends to raise awareness and create energy around protecting the right to vote and limiting the influence of wealthy donors in our elections.”

Missouri State Conference of the NAACP President Nimrod Chapel said: “Legislators are pushing forward the effort to pass a confusing amendment in order to implement a restrictive photo ID law they knew was unconstitutional. We will work with the community to make sure the rights of Missouri voters are restored and everyone can have their vote counted.”

For more information on the St. Louis Votercade and Celebration Village, text MAY8 to 66866.

A Jefferson City woman died Saturday after she was thrown out of a boat as it was traveling along the Missouri River.Tanna R. Henson, 48, was pronounced dead at 11:10 p.m. at University Hospital in … END_OF_DOCUMENT_TOKEN_TO_BE_REPLACED

JEFFERSON CITY, Mo. (AP) – Missouri is at risk of losing $4.5 billion in tax revenue and federal funding for Medicaid because of a fight between lawmakers over contraceptives.At issue is a state tax … END_OF_DOCUMENT_TOKEN_TO_BE_REPLACED