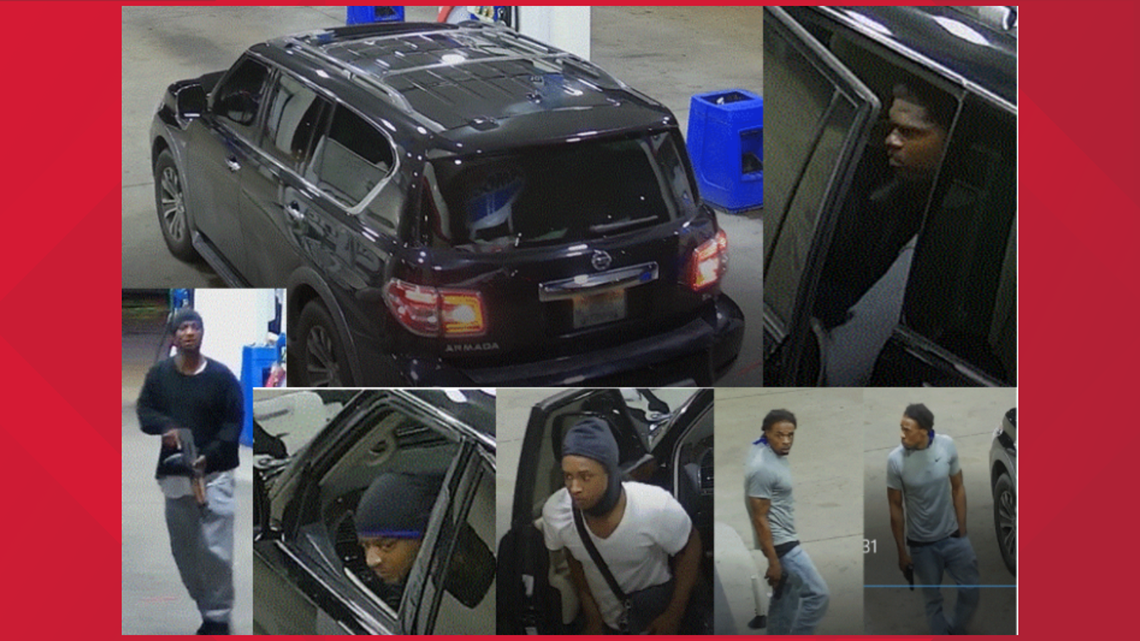 Police are searching for a group of men they say are “armed and dangerous” in the St. Louis area

ST. LOUIS — St. Louis Metropolitan Police are still looking for five men they consider to be armed and dangerous after a shooting earlier this month.

On August 12 police were called to the 1000 block of Hi-Pointe where they found two 19-year-old men. One of them had been shot in the stomach.

Detectives learned through investigation that the two men were riding in a stolen SUV when they were shot. The man who was struck by gunfire was brought to a nearby hospital for treatment. He is expected to make a full recovery.

Police detectives in the south patrol division released surveillance photos to the public last week hoping somebody could identify the men. Four men are pictured in the photos.

As of Tuesday, the men had not been located.

Detectives also want people to keep an eye out for the SUV that was used in the crime. It is a black Nissan Armada with a sunroof.

Police say that you should not approach them and are urged to call 911.

Call the St. Louis Metropolitan Police Department and ask to speak with a 2nd District Detective by calling 314-444-0100 if you have any information about these men.

If you have been a victim of a crime or know someone who has been, 5 On Your Side has compiled a list of resources.

Better Family Life is a nonprofit community development organization working to “stabilize inner-city neighborhoods.” One aspect of its mission is a gun violence de-escalation program.

Life Outside of Violence “helps those harmed by stabbing, gunshot or assault receive the treatment, support and resources they need to find alternatives to end the cycle of violence.”

The Urban League of Metropolitan St. Louis has an anti-crime program called “Safety Net for Youth Initiative,” which is a joint partnership between and Saint Louis Public Schools to provide services to at-risk youth.

Cure Violence is an international organization that has recently launched in a handful of St. Louis neighborhoods. Violence interrupters are trained to deescalate violent situations within their own communities. To learn more, visit https://cvg.org/

(The Center Square) – A year after Democrat auditor Nicole Galloway’s audit revealed an employee stole $316,887 from the city of Center in northeast Missouri, a follow-up report found only slight … END_OF_DOCUMENT_TOKEN_TO_BE_REPLACED

JEFFERSON CITY, Mo. – The average number of COVID-19 cases is at a seven-week low. The 7-day rolling average for cases in Missouri sits at 1,387; yesterday, it was 1,435. Exactly one month ago, the … END_OF_DOCUMENT_TOKEN_TO_BE_REPLACED

Chad Niezing of Manchester captured the title Sunday in the Missouri Mid-Amateur Championship at Jefferson City Country Club. Niezing opened with a 67 on Saturday before carding a 70 on Sunday to win … END_OF_DOCUMENT_TOKEN_TO_BE_REPLACED

Terri Blevins, 44, registers for help at an event sponsored by the city of St. Louis with the Metropolitan St. Louis Equal Housing and Opportunity Council to assist people with filing their … END_OF_DOCUMENT_TOKEN_TO_BE_REPLACED