A St. Louis Metropolitan Police officer is dead from what investigators believe was a self-inflicted gunshot wound days after he was charged with assaulting a fellow officer with whom he was in a relationship.

Rashard C. Lovelace, 31, was facing four counts of fourth-degree domestic assault after two violent incidents that occurred while both cops were on duty last summer.

Lovelace was accused of twice punching his fellow officer in the chest and twice putting his hand around her neck in an “aggressive manner,” according to court documents.

A spokesperson for the St. Louis Metropolitan Police Department told Newsweek that “officers responded to a call for a ‘Shooting’ in the 4100 block of Walsh and located an adult male deceased, suffering from an apparent self-inflicted gunshot wound” at about 11:30 a.m. Saturday. 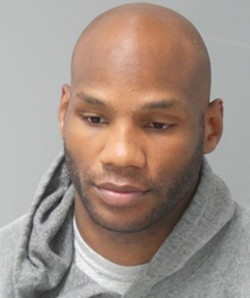 Local witnesses told St. Louis’ Fox 2 that Lovelace died in the yard of his south St. Louis home and that the couple had three children.

Lovelace’s next court appearance was scheduled for May 18. He had been a police officer for less than two years and was still employed by the police department at the time of his death.

Email the author at jaime.lees@riverfronttimes.com

JEFFERSON CITY — A coalition of seven conservative, pro-life members of the Missouri Senate has sent a letter asking the governor to call the General Assembly into session to pass legislation ensuring … END_OF_DOCUMENT_TOKEN_TO_BE_REPLACED

The Environmental Protection Agency’s announcement last week that it plans to craft new protections for streams and wetlands could have far-reaching implications, both nationally and for Missouri’s … END_OF_DOCUMENT_TOKEN_TO_BE_REPLACED

Jefferson City Jefferson City firefighters were still working Tuesday to put out hot spots after a train car caught fire the night before. The call came in a little before 8 p.m. Monday for a smoking … END_OF_DOCUMENT_TOKEN_TO_BE_REPLACED