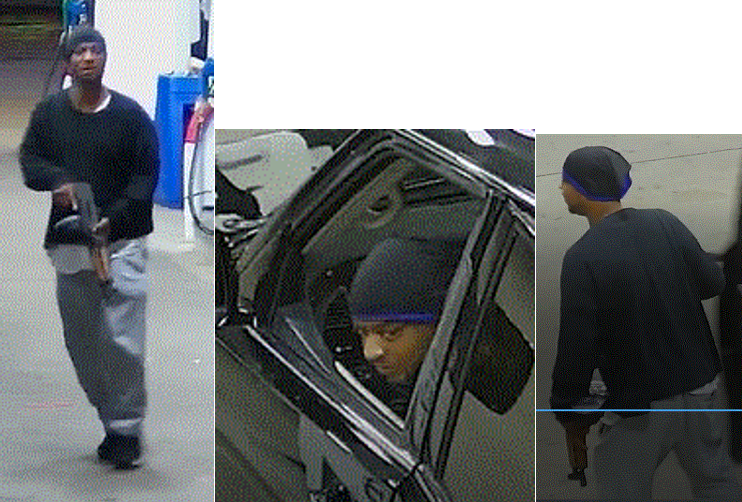 ST. LOUIS – Detectives with the St. Louis Metropolitan Police Department have released a handful of surveillance images of suspects tied to a shooting earlier this month at a gas station known for its giant Amoco sign.

According to Evita Caldwell, a police spokeswoman, the shooting happened on Aug. 12 around 2:30 a.m. near the intersection of Clayton Road and S. Skinker Boulevard.

One person, a 19-year-old man, was shot in the abdomen while sitting in a vehicle with three other people. Two people fled the vehicle and ran off at the time of the shooting and have not been located. The fourth person was not injured in the shooting.

The victims reported a black SUV pulled up and opened fire.

Caldwell said investigators learned the victims were driving a stolen vehicle. It’s unclear if this is connected to the shooting.

The suspects have only been identified as five Black men riding in a Nissan Armada with a sunroof.

Anyone with information on the shooting or the identities of the suspects is asked to call CrimeStoppers at 866-371-TIPS or St. Louis Police at 314-444-0100.

(The Center Square) – A year after Democrat auditor Nicole Galloway’s audit revealed an employee stole $316,887 from the city of Center in northeast Missouri, a follow-up report found only slight … END_OF_DOCUMENT_TOKEN_TO_BE_REPLACED

JEFFERSON CITY, Mo. – The average number of COVID-19 cases is at a seven-week low. The 7-day rolling average for cases in Missouri sits at 1,387; yesterday, it was 1,435. Exactly one month ago, the … END_OF_DOCUMENT_TOKEN_TO_BE_REPLACED

Chad Niezing of Manchester captured the title Sunday in the Missouri Mid-Amateur Championship at Jefferson City Country Club. Niezing opened with a 67 on Saturday before carding a 70 on Sunday to win … END_OF_DOCUMENT_TOKEN_TO_BE_REPLACED

Terri Blevins, 44, registers for help at an event sponsored by the city of St. Louis with the Metropolitan St. Louis Equal Housing and Opportunity Council to assist people with filing their … END_OF_DOCUMENT_TOKEN_TO_BE_REPLACED