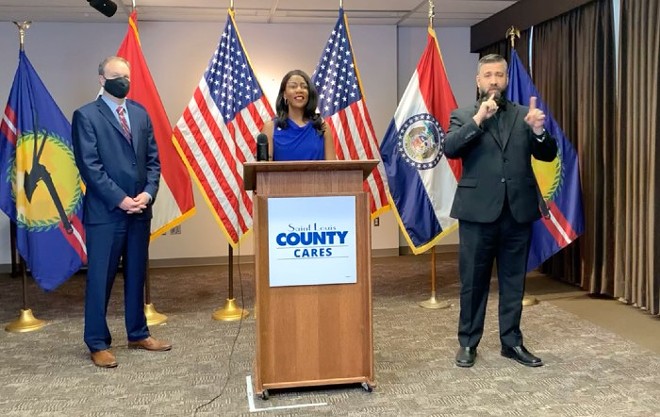 More than a year after the first COVID-19 shutdowns in the St. Louis metro, the city and county have issued new orders to allow restaurants and other businesses to fully reopen — with a few caveats.

“Today, we’ve come together to take the next step in reopening St. Louis city and county,” Page said during the livestreamed news conference.

Along with the lifting of capacity limits, bars will be able to push back closing time to 3 a.m. again.

Page and Jones cautioned that this isn’t a full return to normal, but said the county and city have been able to make progress toward that goal thanks to compliance with previous orders. Businesses will still have to follow social distancing measures, such as spacing tables six feet apart. So restaurants won’t be allowed to pack people in like the pre-pandemic days just yet. Masks will still be required.

There is also the issue of staffing. Restaurant employees who were either laid off or, if they kept their jobs, found themselves working under extra-chaotic conditions and the added threat of catching the virus have been slow to return to an industry where low pay and a lack of health insurance have been the default. Even at the previous capacity of 50 percent, restaurants and bars have struggled to find enough workers.

Jones and Page say they are syncing the city and county rules so that businesses and customers won’t fall under differing orders as they flow back and forth across municipal borders.

The rules in the city and county were among the strongest in the state. Along with capacity limits, the two governments implemented mask mandates. Page noted that Missouri Gov. Mike Parson left it to individual municipalities to sort out their own rules instead of creating a unified state approach. A study released eight months into the pandemic showed that strategy led to a sharp contrast in the spread of the COVID-19 in counties that had mask mandates and neighbors that did not.

Jones and Page urged people to continue being cautious and to get the vaccine if they haven’t already. There is plenty of supply throughout the region, including a mass vaccine site that is operating 8 a.m. to 6 p.m., seven days per week at the Dome at America’s Center (701 Convention Plaza) and taking all comers for first and second doses of the Pfizer vaccine.

For those who can’t leave their homes to get the vaccine, the St. Louis Fire Department is making house calls to administer shots. To set up an appointment or get more info, call 314-612-5918.

A Jefferson City woman died Saturday after she was thrown out of a boat as it was traveling along the Missouri River.Tanna R. Henson, 48, was pronounced dead at 11:10 p.m. at University Hospital in … END_OF_DOCUMENT_TOKEN_TO_BE_REPLACED

JEFFERSON CITY, Mo. (AP) – Missouri is at risk of losing $4.5 billion in tax revenue and federal funding for Medicaid because of a fight between lawmakers over contraceptives.At issue is a state tax … END_OF_DOCUMENT_TOKEN_TO_BE_REPLACED