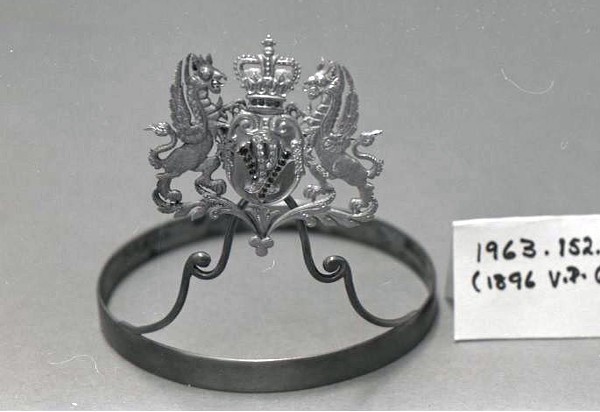 This week, as the internet grapples with the existence of St. Louis’ Veiled Prophet Ball and its connection to actress Ellie Kemper, the resurgence of attention toward bizarre tradition reminded us that a few years back, somebody stole two of the ball’s old-ass racism crowns.

Indeed, in 2018, a pair of gem-encrusted, 120-year-old tiaras — an 1894 Veiled Prophet Special Maid’s Crown and an 1896 Veiled Prophet Queen’s Crown — were found to be missing from the museum’s “Seeking St. Louis” exhibit, where they had been presented since 2005. It would seem an unknown crown-stealer snatched them away and managed to disappear before the theft was noticed.

Reached via email, Museum spokeswoman Madeline Reichmuth tells RFT that the crowns are still missing and that there have been “no updates or developments” in terms of where the gaudy vestiges of exclusionary elitism may have wound up. (RFT also reached out to the St. Louis Police Department with questions about the investigation, though we did not receive a response by publication.)

The crowns are just one piece of the bizarre tapestry that is the Veiled Prophet Ball, which was founded in 1878 by a pair of brothers who had both served in the Confederate army. Initially conceived as a response to the Great Railroad Strike of 1877, the Veiled Prophet Ball emerged with a focus on the city’s elite families and business owners.

In the late 1890s, when the two stolen crowns rode the heads of the event’s honored young women, no Blacks were allowed entry — and that policy didn’t change until 1979, when the secret society finally diversified and began accepting non-white people, including Jews, into its exclusive ranks.

Then, on Monday, Twitter user @WB_Baskerville shared several photos of the eponymous Veiled Prophet, a man (as always) dressed in an ornate white robe and whose face is hidden by a long white veil.

Next to the Prophet sits the Queen of Love and Beauty.

“Every once in a while,” the tweet read, “I remember that the Veiled Prophet Ball exists and that everything True Detective season 1 was about is real.”

Every once in a while I remember that the Veiled Prophet Ball exists and that everything True Detective season 1 was about is real pic.twitter.com/BtFh1Y6lmg

In a reply, another user, @hannastasia, tweeted out a further explanation, describing the Veiled Prophet Ball as “a fancy event put on by our local KKK, of which Ellie Kemper was once the Queen of Love and Beauty.”

The reply included a link to a lengthy article on the Veiled Prophet authored in 2014 by Scott Beauchamp for The Atlantic — as well as an attached image, showing an old newspaper illustration of the Veiled Prophet in a robe, pointed hat, and holding a pistol and shotgun.

But it was the reference to Kemper — famous for her TV roles in The Office and Unbreakable Kimmy Schmidt — that sent Twitter into a tailspin. Some dubbed Kemper a “KKK princess” even as others attempted to explain that the Veiled Prophet, despite its racist membership rules and familiar robe-and-hood aesthetic, is not linked to the Ku Klux Klan.

A fancy event put on by our local KKK, of which Ellie Kemper was once the Queen of Love and Beauty https://t.co/6xgwa788Ck

There’s also the relevant detail that in 1999, when Kemper was selected as the “Queen of Love and Beauty” at that year’s ball, the event was already integrated and on its way to shedding certain aspects of its past.

Yet, the Veiled Prophet Organization lives on. Its “VP” logo appears on various parade media and even on the apparel of parade security officers.

The controversy over Kemper hasn’t appeared to change any plans for 2021. This year, just like Kemper in 1999, some elite-born young woman will be presented with a crown and seated next to a robed and veiled man. During the parade, their magic carpet-style float will be accompanied by a team of “Bengal Lancers” — horse riders wearing fake beards and outfits that reflect a century-old vision of what Indian soldiers look like.

What won’t be there are two old crowns.

In an effort to better represent the needs and interests of all area residents, a member of Representative Vicky Hartzler’s staff, Lauren Mann, will be available at the St. Clair County Courthouse to … END_OF_DOCUMENT_TOKEN_TO_BE_REPLACED

Demand for e-commerce options in retail was already growing before the pandemic, but growth in the sector accelerated during COVID-19, pushing retailers to embrace new shopping methods to reach … END_OF_DOCUMENT_TOKEN_TO_BE_REPLACED

There is no doubt that business ownership can be a messy experience full of hurdles to overcome on a daily, weekly and yearly basis. But do you find yourself running into the same hurdles over and … END_OF_DOCUMENT_TOKEN_TO_BE_REPLACED