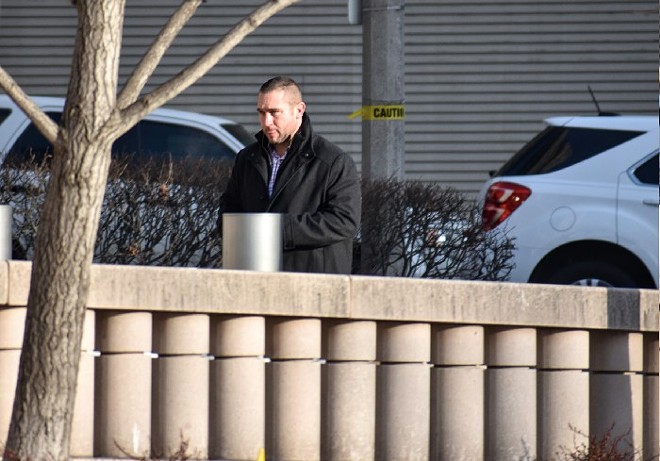 Welcome back to the Big Mad, RFT’s weekly roundup of righteous rage! Because we know your time is short and your anger is white hot:

Bad Apples: The insane, aneurysm-inducing context of ex-St. Louis cop Dustin Boone’s texts isn’t really even about Boone. It’s that when he texted “fucking n———” there was a fellow cop on the other end to receive it. When he bragged about tasing some guy in the head and then forcing him to say “I’m a pussy” while the guy puked on himself and cried, there were five other cops on the group chat. “That’s fuckin hilarious!” St. Louis police officer Shawn Griggs replied. “Strong work!” Boone was so amped about the taser “head shot” that he texted his parents, his then-girlfriend, other family members and, for good measure, a couple of buddies, whom he told that the guy was suffering seizures. We wrote a full story with more details about Boone’s texts, including his advice on prescription pills, racist slurs, his enthusiasm for violence and his hatred of surveillance cameras that inhibit said violence. But here’s an infuriating takeaway: Boone is just the one dumb enough to write all this in texts and get caught. He’s off the force. His audience? They’re still out there.

Leave the Bears Be: One cute little black bear takes a stroll through the St. Louis suburbs over the weekend and everybody completely flips out. First spotted in the Kirkwood area, the solitary bear was out walking and minding its own business — probably searching for picnic baskets — when a bunch of uptight suburbanites decided to make a whole damn fuss, ultimately leading to our furry friend being tranquilized and carted off. It’s the same fate that befell his cousin Bruno last year, too, when homie tried to roam through our area in search of a little, erm, honey pot, if you know what we mean. But why can’t we just bring our pets inside, secure our trash cans and leave these poor bears to do their thing? After all, they lived here first, right? Everybody is always saying they want to experience more nature, but when nature comes wandering straight up into their backyards they totally flip out. Now poor K.B. (Kirkwood Bear) has been dragged out of a tree, tranquilized and dropped in less populated lands. And our tax dollars paid for it! Well, we say let the bears pay the bear tax. We’ll pay the Homer tax, thank you very much.

The QuikTrip Divide: For more than a year, QuikTrip patrons in St. Louis City have lived with the unbearable lightness of not being filled with tube-shaped meats — an absence that was also a disparity, as just minutes away, enshrined in QTs very much like our own, privileged snackers in St. Louis County were noshing on delicious taquitos and corndogs. When it came to QTs, it was the city versus everybody else: In the heart of the pandemic, health officials in the county and St. Charles allowed QTs to sell roller grill items as long as they remained shielded under a plastic cover. The city’s pandemic rules against buffet dining carried no such allowance, which means that, for city residents wandering into one of the “other” QTs this year, the experience was a gauntlet of saddening self-restraint. Instead of the county’s bounty, we instead find the roller grill barren, an object out of time, like a sentinel who exists only to stand before our hopes and whisper, “No.” In county QTs we passed as sojourners through foreign lands, staring at the taquitos rolling, the corndogs corndogging, the buffalo chicken bites tanging the air with their sharp scent of temptation. Thankfully, St. Louis’ new health order means the city’s eight QT locations are installing the protective covers and readying a return to roller grills — but the months of deprivation and meat-tube-related jealousy still sting. Tempt us no more, QT! Give us this day our daily taquito! Please, with all haste, give us back our roller snacks!

The bums’ Rush: Officially codifying its preference for hot air pushed by bigoted blowhards over hard news delivered without fear or favor, the Missouri House voted this week to give conservative radio host and flabbergastingly racist fan of pills Rush Limbaugh his very own annual day in the state of Missouri, immediately after shooting down a similar effort for fellow Missouri native Walter Cronkite. It’s not surprising in the least, but it is remarkably depressing, a symbol of how the conservative party in this state would much rather reward those who yell and scream and peddle anger and outrage than those who deal in soberly delivered facts, uncomfortable though they may be. To that end, when’s Big Mad Day?

In an effort to better represent the needs and interests of all area residents, a member of Representative Vicky Hartzler’s staff, Lauren Mann, will be available at the St. Clair County Courthouse to … END_OF_DOCUMENT_TOKEN_TO_BE_REPLACED

Demand for e-commerce options in retail was already growing before the pandemic, but growth in the sector accelerated during COVID-19, pushing retailers to embrace new shopping methods to reach … END_OF_DOCUMENT_TOKEN_TO_BE_REPLACED

There is no doubt that business ownership can be a messy experience full of hurdles to overcome on a daily, weekly and yearly basis. But do you find yourself running into the same hurdles over and … END_OF_DOCUMENT_TOKEN_TO_BE_REPLACED