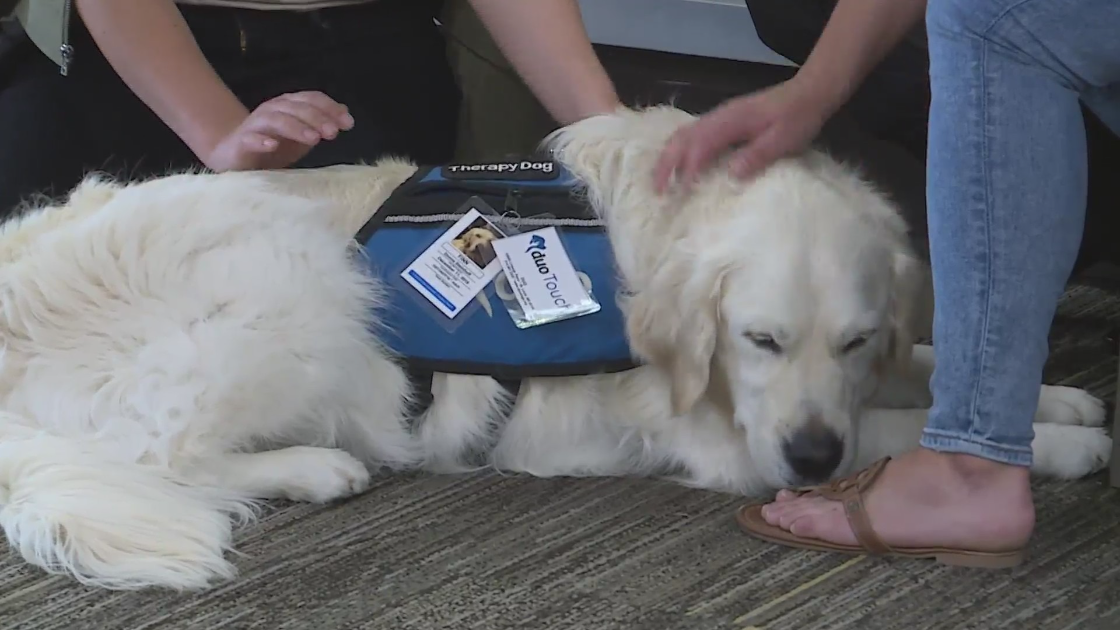 ST. LOUIS – Therapy dogs who were sidelined by the coronavirus pandemic are returning to work in the St. Louis area. Dogs like Finn have returned to Siteman Cancer Center.

“Just touching him and feeling him, it was just so pleasant,” said Sandy Wattler of Fenton. She was receiving chemotherapy treatment for stage 4 breast to bone cancer.

“They’re relaxed, I’m relaxed; it relaxes me and it’s just wonderful to have him back,” Wattler said.

Finn is back sharing his love with those who need it the most.

“It was nice. It was nice petting him. It helped to relieve some of my anxiety,” he said.

“(Finn) visits with patients who are either undergoing treatment infusion or their caregivers and friends who are here,” Steinhoff said.

Finn is a 5-year-old English golden retriever; they are usually white in color. He has spent about a year and a half of training with Duo Dogs Incorporated.

“So, it’s really about the temperament as you saw with Finn, he’s incredibly relaxed, laid back, and that’s really what we’re looking for. Breed makes no difference to us; we don’t have any breed restrictions,” said Stacy Maly-Rodgers, Duo Dogs Incorporated.

Finn cheers up patients. Their blood pressure and respiration levels lower when he walks in. Maly-Rodgers said therapy dogs can also have an effect on the physical condition of cancer patients.

“So, if Finn comes in and plays with a child, the child forgets what’s happening, so we were able to lower the amount of pain medication that child might need post-surgery by utilizing visits from the touch team,” she said. “It’s amazing.”

Therapy dogs not only bring comfort to patients in hospitals but there are also smiles on the faces of staff in those hospitals.

“And I think we’re the first team to come back after we were allowed and the nurses in the hallway were cheering,” Steinhoff said. “They were all so happy to see the dogs back.”

Therapy dogs from Duo Dogs Incorporated keep busy every week visiting about 150 locations throughout the St. Louis area including hospitals, nursing homes, and schools at no cost.

(The Center Square) – A year after Democrat auditor Nicole Galloway’s audit revealed an employee stole $316,887 from the city of Center in northeast Missouri, a follow-up report found only slight … END_OF_DOCUMENT_TOKEN_TO_BE_REPLACED

JEFFERSON CITY, Mo. – The average number of COVID-19 cases is at a seven-week low. The 7-day rolling average for cases in Missouri sits at 1,387; yesterday, it was 1,435. Exactly one month ago, the … END_OF_DOCUMENT_TOKEN_TO_BE_REPLACED

Chad Niezing of Manchester captured the title Sunday in the Missouri Mid-Amateur Championship at Jefferson City Country Club. Niezing opened with a 67 on Saturday before carding a 70 on Sunday to win … END_OF_DOCUMENT_TOKEN_TO_BE_REPLACED

Terri Blevins, 44, registers for help at an event sponsored by the city of St. Louis with the Metropolitan St. Louis Equal Housing and Opportunity Council to assist people with filing their … END_OF_DOCUMENT_TOKEN_TO_BE_REPLACED